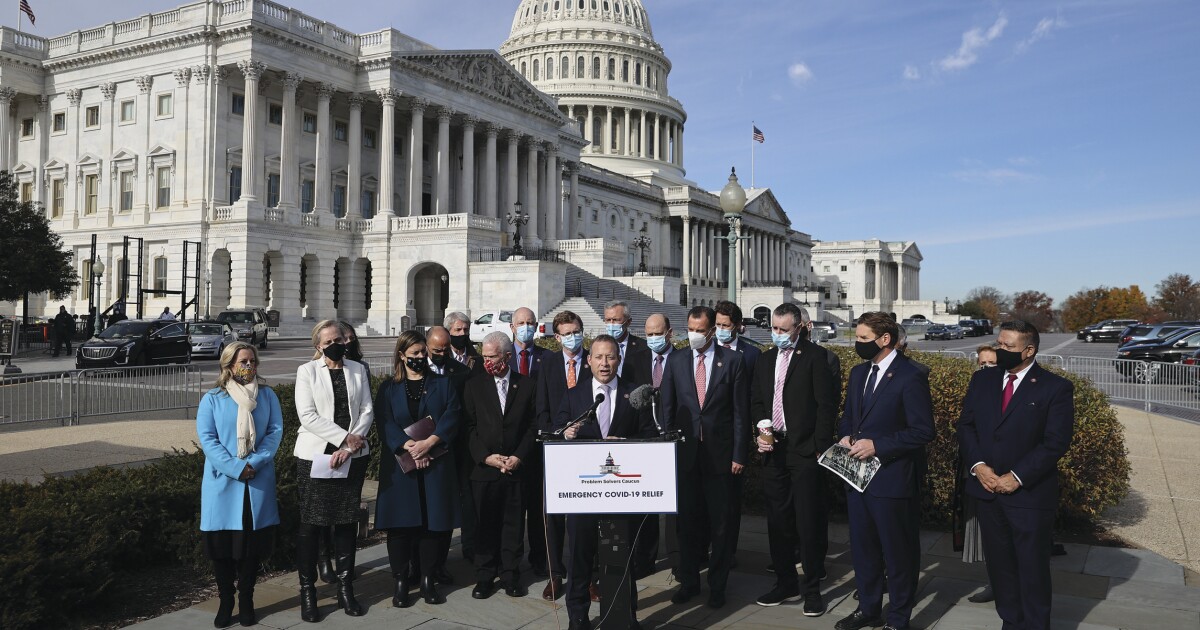 House and Senate leaders, who had been prepared to end the year without approving a new coronavirus aid bill, are now rushing to try to pass legislation in the next week.

Rising numbers of coronavirus cases and hospitalizations have increased pressure on the leadership in both parties and forced the two sides to consider compromise legislation that has eluded Congress for months.

“It will get passed because we are going to fight every single day to make sure it happens,” Rep. Josh Gottheimer, a New Jersey Democrat, said Thursday.

Gottheimer is part of a large, bipartisan group of House and Senate lawmakers who unveiled a compromise coronavirus aid proposal that they aim to pass this month.

The group pledged to remain in Congress until a bill reaches the president’s desk.

“We will be here,” Rep. Tom O’Halleran, an Arizona Democrat, said. “We’ve got to take care of this damn problem.”

The $908 billion measure this week earned the tentative but critical backing of House Speaker Nancy Pelosi, a California Democrat, and Senate Minority Leader Chuck Schumer, a New York Democrat, as well as a strong signal from President Trump that he’ll sign a compromise deal into law.

The endorsements came quickly last week as governors in some states announced new lockdown measures to combat a growing number of coronavirus cases that is stretching the capacity of hospitals.

Lawmakers on Capitol Hill warned leadership that constituents cannot wait until the next Congress convenes for another round of coronavirus aid.

“There’s been a general discussion that it is needed more now than it would be later,” Sen. Mike Braun, a Minnesota Republican, told the Washington Examiner after a meeting with fellow GOP senators on the matter.

Coronavirus surges nationwide are triggering lockdowns and other emergency measures.

In Maryland, Gov. Larry Hogan announced that he was activating the state’s Medical Reserve Corps and other programs to increase medical staffing in response to a rise in coronavirus hospitalizations.

Hogan called on the federal government to provide more aid to states to help them combat the virus and assist businesses and people hurt by the economic downturn.

“I think there's pressure on all of us because of what's happening out in the field. Get something done,” Sen. Ben Cardin, a Maryland Democrat, told the Washington Examiner.

The House, run by Democrats, plans to adjourn for the year by Dec. 11, creating a tight deadline that may make it impossible for Congress to pass a deal this year, some lawmakers warned.

McConnell circulated a more narrow proposal to Republicans earlier in the week that would cost roughly $500 billion, but he’s also indicated he would take up a measure that Trump is willing to sign.

Many Republicans would vote against the bipartisan bill, but it would pass with Democratic support.

“You're gonna lose 15 to 20 Republicans if it gets away from that very targeted $500 billion,” Braun said. “But I'm guessing there will be enough, that if leadership is pushing it, that as long as it doesn't get way above a $1 trillion, that it's got a chance of going through.”

Republicans have been reluctant to pass a significant aid package because they believe the federal government should first use money that remains unspent from measures worth more than $3 trillion that Congress passed earlier this year.

The bipartisan bill lawmakers are now drafting checks that box by reallocating unspent federal funds to cover the cost of much of the proposal.

The measure has the backing of the 50-member, bipartisan House Problem Solvers Caucus as well as senators in both parties. It’s larger than a $500 billion measure that Republicans were seeking, but it's also far less costly than a $2.2 trillion bill that Pelosi has proposed.

It includes many of the “must have” ingredients each party has insisted on, including some of the state and local funding desired by Democrats and lawsuit liability protections for businesses, schools, and healthcare facilities that Republicans favor. Much of the funding comes from the last round of coronavirus aid that has not yet been spent.

Sen. Ron Johnson, a Wisconsin Republican who had been an outspoken opponent of passing a new aid bill, said he is now considering supporting the bipartisan proposal.

Johnson, like other Republicans, blamed Pelosi for holding out on a coronavirus deal in the months prior to the election in a bid to gain more leverage to pass a $2.2 trillion measure.

But House Democrats ended up losing more than a dozen seats and will govern with a narrow majority beginning in January.