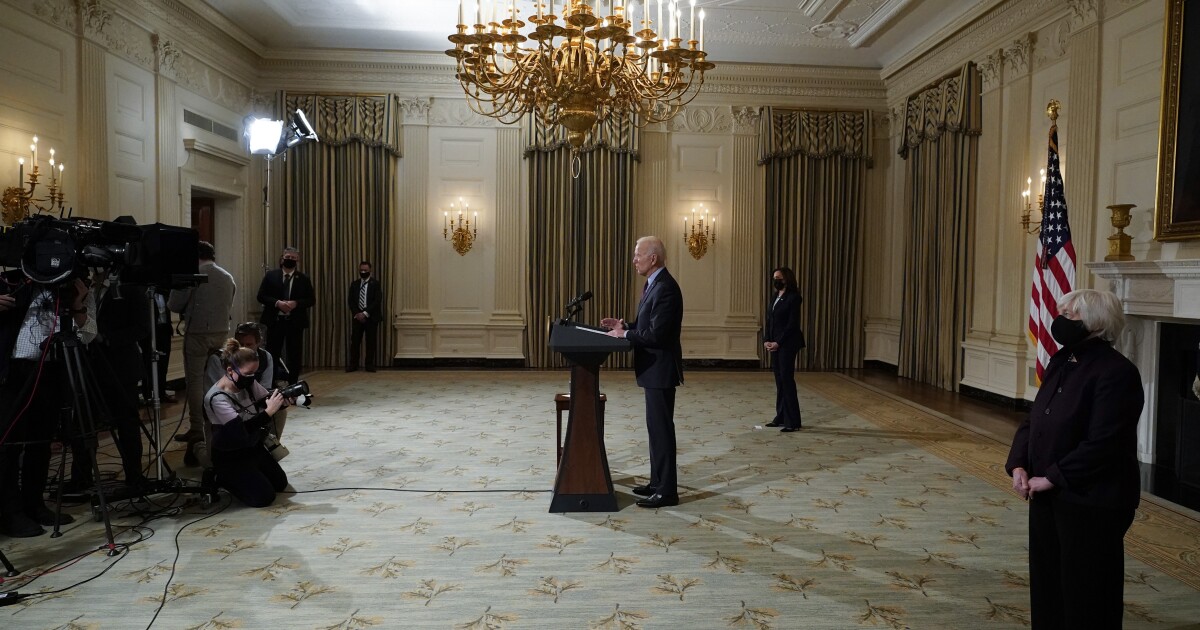 President Biden stood firm on his pledge to pass a significant coronavirus relief package on Friday, delivering an economic address to the country that signaled reticence to compromising on a core part of his proposed $1.9 trillion bill.

“Here's what I won't do. I'm not cutting the size of the checks, they're going to be $1,400 period. That's what the American people were promised,” Biden said in remarks from the White House State Dining Room on Friday.

Biden has signaled he may be willing to compromise on small details of the proposed package, such as targeting direct payments to lower-wage earners, but he used the address to continue holding firm on the need for a larger measure than many Republican lawmakers are willing to support.

“We're still in the teeth of this pandemic,” Biden said, the virus “still wreaking havoc” on the economy.

“Fifteen million Americans are behind in their rental payments. Twenty-four million adults and 12 million children literally don't have enough food to eat,” Biden added. “A lot of folks are losing hope. And I believe the American people are looking right now to their government for help, to do our job, to not let them down.”

And he made an appeal across the aisle, stating that those suffering “aren't Democrats or Republicans, they're Americans.”

While Biden has said repeatedly he hopes to secure some Republican votes for his bill, he told 10 centrist Republicans their $618 billion counter-proposal is too small to meet the needs of a still-struggling economy about which he repeatedly Friday painted a dismal picture.

“If I had to choose between getting help right now to Americans who are hurting so badly and getting bogged down in a limping negotiation, or compromising in a bill that's up to the crisis, that's an easy choice. I'm going to help the American people are hurting,” he said.

Biden called a provision in the package to raise the federal minimum wage to $15 an hour “big and bold” on Friday, despite Democratic senators this week sharing reservations over the proposal.

Biden and his top economic aides have urged a full-throated response that addresses the joint health and economic crises, fearing a response that fails to meet the scale of the pandemic's fallout would leave the U.S. economy stuck in the mud with no end in sight to the pandemic.

Biden gave a bleak assessment of the economy earlier in the day, pointing to a January jobs report that showed “only 6,000” new private-sector jobs.

“At that rate, it's going to take 10 years before we get to full employment,” Biden said earlier in the day from the Oval OFfice ahead of a meeting with Democratic House leaders and committee chairs.

Biden has heaped pressure on Congressional leaders to strike a deal, meeting this week with Republicans and Democrats at the White House in the search of areas for bipartisan cooperation.

The White House last week dispatched Vice President Kamala Harris to West Virginia and Arizona via Zoom to advocate for the American Rescue Plan, two states where centrist Democratic Senators had voiced reservations over the size of the bill and the mechanisms for passing it.