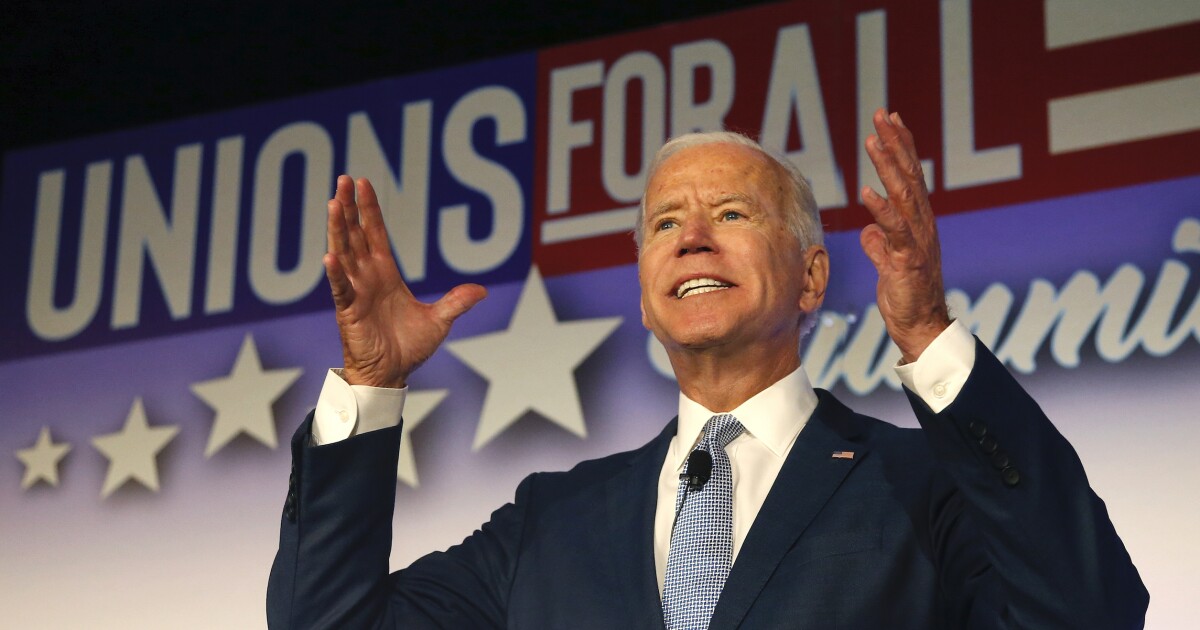 A generation ago, labor unions actually tried to represent the financial interests of workers. For all their other faults, they at least focused on higher wages, better working conditions, and tight labor markets for their members.

That era is long gone. Now, labor unions' top issues include “racial justice,” “climate change,” and “immigration reform.” This is one reason why the percentage of workers in unions has dropped from a high of 33% to a low of 10.5% today. Unions have become just another institution captured by progressive elites who are completely out of touch with what working families actually want.

Desperate to restore big labor’s depleted coffers, President Joe Biden is attempting to stuff something Democrats call the “Protecting the Right to Organize,” also known as the PRO Act, into his $3.5 trillion spending bill. This legislation would force millions of unsuspecting workers into unions that don’t care about them or their financial well-being, and it will steal money out of their hard-earned paychecks in the process.

Democrats say this legislation only protects workers' rights, but nothing could be further from the truth. For starters, the legislation violates worker privacy by forcing employers to give every scrap of information they have about employees to liberal activists. Don’t want Black Lives Matters protesters to know where you live? What your cellphone number is? Or your personal email address? Too bad. The PRO Act forces your employer to give activists all of this info.

The PRO Act also bans the secret ballot for union elections. Instead, it allows unions to obtain the power to bargain for an entire workforce through the so-called “card check” process. Under card check, activists are free to pressure workers at their homes and workplaces to sign cards indicating that they support forming a union. Once activists have signed cards from a majority of workers, all the workers must then submit to that union. Under card check, workers have no privacy protection from union intimidation.

Do you or anyone you know ever work as an independent contractor? This would include Uber drivers, DoorDash deliverers, or good old-fashioned freelance writers and truckers. If so, then this bill affects you, too. Just as California’s disastrous AB 5 upended all of these industries by turning all of these independent contractors into regular employees, the PRO Act would do the same thing to every state across the county.

The PRO Act would also abolish right-to-work protections in 27 states. In right-to-work states, such as Virginia, workers can choose whether or not they want to join a union. Under the PRO Act, no worker would be given that choice. Once a bare majority in any workplace nationwide has voted to form a union, all workers would then be forced to join that union and pay dues to that union every month. No exceptions.

As if the losses of privacy, the secret ballot, and the right not to join a union weren’t bad enough, the PRO Act would also subject everyone to endless secondary strikes and boycotts. Under current law, a union is allowed to strike against an employer, but not to target companies that continue to do business with that employer. So, for example, a hotel workers union can picket the hotel where its members work, but it can’t then target the business that sells food to the hotel or the business that books a conference at the hotel. Those would be secondary strikes.

But under the PRO Act, unions could target whatever business they wanted for whatever reason. If you are tired of boycotts and protests by woke activists now, it would be a hundred times worse if the PRO Act became law. There would be no hiding from woke protests anywhere.

Democrats are trying to pass this radical big union bailout on a party-line vote with the barest congressional majorities. If Biden’s $3.5 trillion spending plan wasn’t already bad enough due to the tax hikes, the record-setting amnesty, and growing inflation, the PRO Act alone would be reason enough to sink the bill.