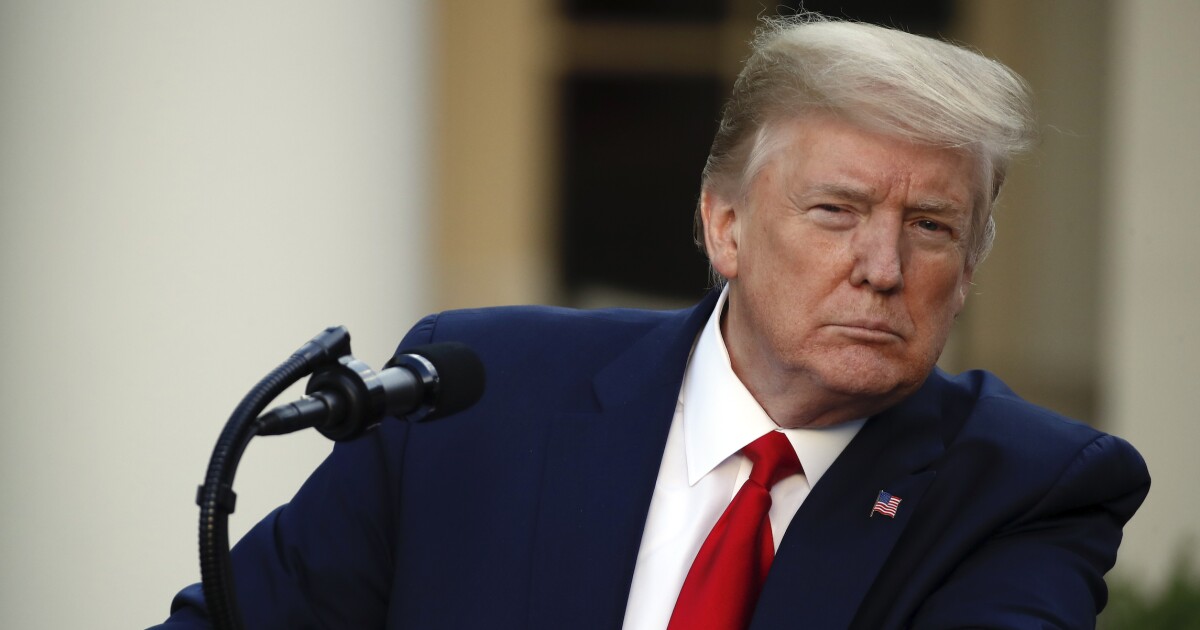 President Trump signed the $900 billion COVID-19 economic rescue package he called a “disgrace” in time to avert a government shutdown. Now, he wants to go back and excise the pork-barrel spending.

The tool Trump plans to use to have his new spending and cut it too is the Impoundment Control Act of 1974. “I will send back to Congress a redlined version, item by item, accompanied by the formal rescission request to Congress insisting that those funds be removed from the bill,” he vowed.

“It would be useful for Trump to send up a rescissions bill, not because it would end up cutting anything permanently but because the more debate the country has on wasteful spending, the better,” said Chris Edwards, tax policy director at the libertarian Cato Institute.

Reviving the rescissions process under the 1974 law, which went unused under Presidents Barack Obama and George W. Bush, was once considered an important part of how the Trump administration planned to rein in federal spending. The White House floated up to $60 billion in these types of cuts in 2018, ultimately submitting $15.4 billion to Congress. “We want to make sure the muscle memory behind this process is remembered by Washington,” said a senior administration official at the time.

“The bottom line is it's $15.4 billion. That's the bottom line,” then-Trump budget chief Mick Mulvaney told reporters. “If it passes, it would be the largest rescissions savings in the history of the country. I'm very excited about the possibility of it passing.”

But the Impoundment Control Act requires Congress to vote to approve trimming spending it has already authorized, with the president only able to delay it for 45 days. This strategy didn’t go far when Republicans controlled both houses. Now, Democrats hold the majority in the House and have said Trump’s “redlined version” of the stimulus package is dead on arrival. The chamber instead passed a bill increasing stimulus checks to $2,000, as Trump also requested.

Even when successful, the money involved is often relatively small. Between fiscal years 1974 and 2000, presidents sought $76 billion in rescissions and Congress granted about $25 billion, according to the Committee for a Responsible Federal Budget.

“Even if anything was cut in the next few weeks, such as foreign aid, it would be added back later next year simply because most members of both parties believe in higher spending,” said Edwards, who edits Downsizing Government. “They believe it helps the recipients of spending and the overall economy. They are very wrong, but that’s what they believe today, and sadly, the resulting higher debt will wreck the economy tomorrow.”

But the proposal does allow Trump to take a shot at Democratic spending without continuing to disrupt unemployment checks, partially shutting down the government, or delaying the stimulus ahead of a pair of Georgia Senate runoff elections that will determine which party controls the Senate. Trump had already vetoed the more than $740 billion defense authorization bill, though lawmakers are working to override.

“Frankly, Congress set itself up by wrapping together the COVID bill with the annual approps package,” said Republican strategist John Feehery. “No way was he going to sign that bill without giving the establishment the middle finger.”

Prior to 1974, presidential impoundment powers were stronger. Congress believed Richard Nixon was abusing his power by unilaterally holding back billions of dollars in federal spending on programs he opposed. Trump was impeached for delaying congressionally authorized military aid to Ukraine, though the Senate voted to acquit him at the beginning of this year.

Both Democratic and Republican presidents have sought a line-item veto, a power wielded by 43 of the nation’s 50 governors. But the Supreme Court has overturned attempts to establish one legislatively, with one ruling coming as recently as 1996, and there appears to be insufficient support for a constitutional amendment.

“You don’t get everything you want, even if you’re the president of the United States,” Sen. Pat Toomey, a Pennsylvania Republican, said on Fox News Sunday.

Republicans are expected to step up their opposition to deficits and high levels of spending once President-elect Joe Biden takes office next month. The prospect of a new administration has cost Trump his leverage with some congressional Republicans, while other strong allies of the current White House are preoccupied with challenging the election results in multiple close battleground states ahead of a Jan. 6 vote to certify the Electoral College outcome.