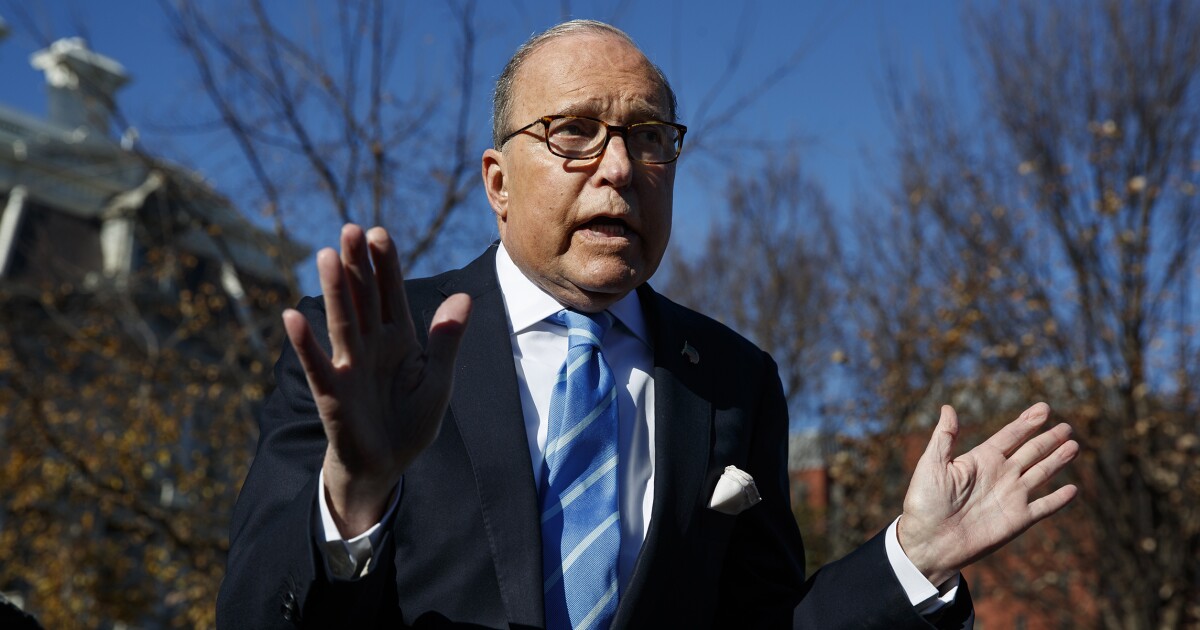 Top White House economic adviser Larry Kudlow said he had few allies in the Trump administration to help push his free market, free-trade agenda and criticized many of his colleagues.

When asked during an interview with the Washington Examiner who his closest allies within the Trump administration are, Kudlow could cite only Treasury Secretary Steven Mnuchin.

Kudlow said that he was one of few in the administration who consistently pushed for free markets and free trade, while there was a strong contingency of protectionists. Protectionists favor restricting imports from other countries through tariffs and trade deal terms.

President Trump’s top trade adviser, Peter Navarro, for example, is a “protectionist hardcore,” said Kudlow, with whom he had “very big disagreements.”

Kudlow said Navarro did not even support one of the Trump administration’s biggest achievements, the $200 billion China trade deal, because he suspected that Mnuchin and Kudlow were too involved in the process. Navarro feared that, thanks to the top two Trump economic officials, the China trade deal would have too many free-trade elements that could be disadvantageous to the United States.

“Navarro didn't want that deal. POTUS had to just shut him up in meetings. Because POTUS wanted the deal,” said Kudlow.

Kudlow, who is the director of Trump's National Economic Council and one of his closest advisers, said that one of his few friends in the administration was U.S. Trade Representative Robert Lighthizer.

“We worked very well together on China, my friend Lighthizer, who I have huge respect for,” said Kudlow.

“And I was persuaded by him that we really had to take China to task,” Kudlow added.

Kudlow also lost battles within the administration to stop what he described as drug price controls.

A self-described “spokesman for free market economics” within the administration, Kudlow opposed executive orders in July meant to lower the cost of prescription drugs for seniors by mandating discounts on certain drugs.

Kudlow said, ”Healthcare, in general, was a disappointment to me. We just didn't get the job done.”

“We never really put together a market-oriented consumer health plan to replace Obamacare. And that was a disappointment to me,” Kudlow said.

“I had talked the president into supporting the budget caps with Russ and Mick Mulvaney. The disappointment was the president. It just didn't stick,” said Kudlow.

“The president backed off it, and more spending passed. I'm not going to name names, but I will say it was the ‘political guys' who convinced him,“ Kudlow added.

Kudlow has a long history in politics. He served as an economist during the Reagan administration and then worked on Wall Street before becoming an economic media commentator for conservative magazine National Review and later hosted several television shows on CNBC.

Kudlow said that thanks to Federal Communications Commission Chairman Ajit Pai, he was able to gain significant and unexpected traction in expanding America’s 5G telecom capabilities, a task Trump had delegated to him.

“Chairman Pai is a superstar. And I mean this, he and I worked hand in glove on 5G,” said Kudlow.

“Whenever there were problems, I would bring Pai into the Oval to meet with the president to explain what we were doing on 5G. I mean, we finally beat the Defense Department for Christ's sake,” Kudlow said. In the spring of last year, the Pentagon said that deploying certain 5G wireless communications could disrupt service to the military and Air Force. However, the Trump administration said in the fall that it had found ways to expand 5G without compromising military preparedness or national security.

Under Kudlow’s watch, the Trump administration expanded the country's high-speed telecom infrastructure to 428 5G networks in 375 cities and auctioned off a large amount of telecom spectrum or radio waves in order to allow internet access to expand in rural areas.