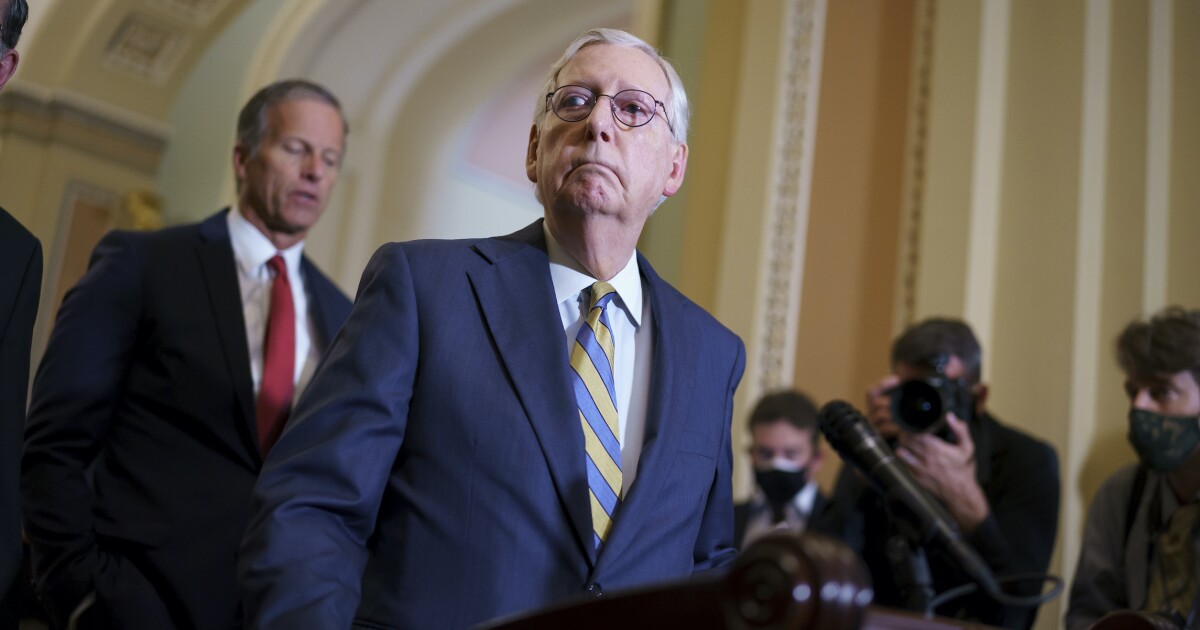 Republicans are putting political pressure on Democrats over their proposed go-it-alone $3.5 trillion reconciliation spending and tax bill by threatening to vote against legislation to raise the federal government’s debt ceiling.

While Democrats are “extolling the virtues of their latest shopping list, they are afraid to up the limit on their credit card,” Senate Minority Leader Mitch McConnell said on the floor Thursday.

“If our colleagues want to ram through yet another reckless tax and spending spree without our input, if they want all this spending and debt to be their signature legacy, they should leap at the chance to own every bit of it,” said McConnell, a Kentucky Republican. He warned: “If they don’t need or want our input, they won’t get our help — they won’t get our help — with the debt limit increase that these reckless plans will require.”

The last debt limit suspension lasted through Saturday, and on Sunday, the Treasury Department started using “extraordinary measures” to prevent it from being breached. That might only last through mid-September, around the time when the House is scheduled to return to in-person work. The Congressional Budget Office estimates that the measures will be exhausted sometime in October or November.

Democrats reportedly hope to protect the centrist members of their party by keeping an increase of the debt ceiling separate from their go-it-alone bill that requires only a simple majority rather than the 60 votes usually needed to pass bills in the chamber.

Instead, they could try to pressure Republicans by pairing a debt ceiling increase to must-pass legislation like a continuing resolution, which would require support from at least 10 Senate Republicans.

Congress will need to pass a continuing resolution to continue funding the government by the end of September when the current fiscal year ends or face a government shutdown.

Democrats are accusing Republicans of putting America's economy and credit at risk by withholding support. Democratic Sen. Mark Warner of Virginia told reporters that it is a “fake crisis” and the “epitome of irresponsibility.”

“When it comes to the debt ceiling of this country, I hope we can find a way to deal with this responsibility. It has always been a political football depending on which party is in power,” Senate Majority Whip Dick Durbin of Illinois said on the Senate floor Thursday. “To risk the possibility of default on America’s debt at this moment in our economic history is a dangerous, dangerous undertaking.”

Durbin also told reporters Thursday that the decision on whether to deal with the debt limit on reconciliation hasn’t been made. “Possibly, we will” do it without Republican support, he said.

McConnell is not the only one who is signaling no Republican support for a debt ceiling extension if Democrats pass their massive “human infrastructure” reconciliation bill.

Republicans could also theoretically try to use the debt ceiling as political leverage to get other concessions in exchange for support.