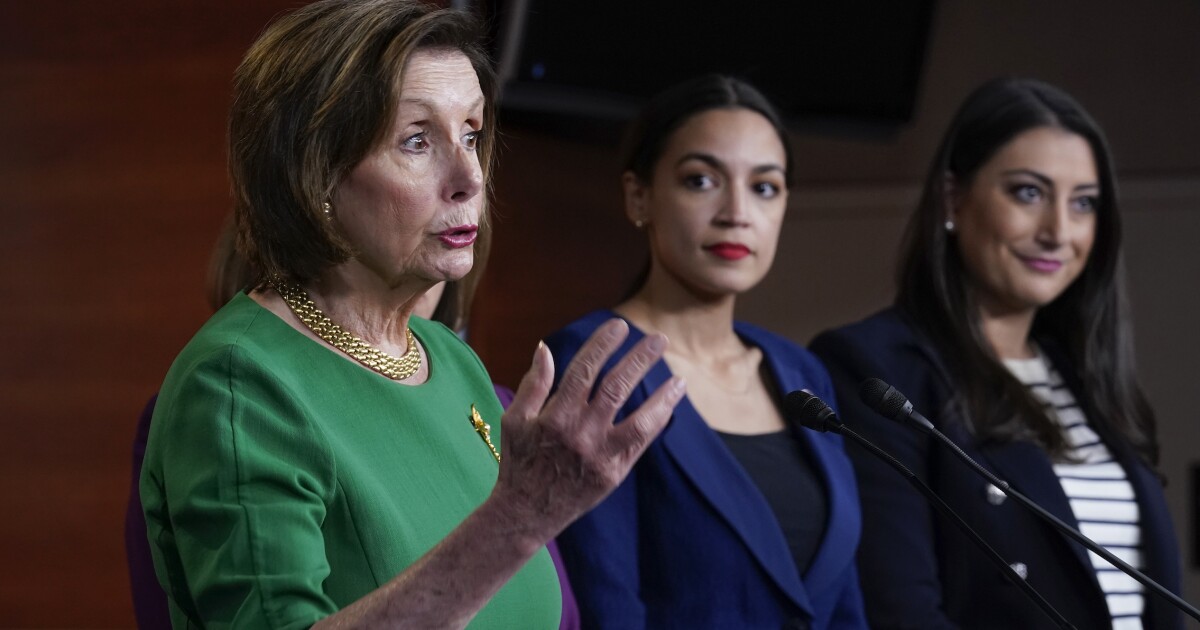 House Democrats who announced the creation of an economic diversity panel Wednesday downplayed the nation's skyrocketing inflation, suggesting at one point it was simply too low before the COVID-19 epidemic.

“Prior to COVID-19 we were under our inflation targets,” Rep. Sara Jacobs, a California Democrat, told reporters who asked about rising inflation concerns. “The Fed sets an inflation target of two to 3%. We were not reaching that for many, many years. And so, this also could be a natural rebalancing of our economy.”

Speaker Nancy Pelosi tapped Jacobs to serve along with seven other Democrats on the new Committee on Economic Disparity and Fairness in Growth. Republicans haven’t appointed any members to the committee yet but plan to do so later, a GOP aide said.

Democrats said at the event that more spending on infrastructure and social programs would help create jobs and help end economic disparities.

President Joe Biden is pitching trillions of dollars in new spending on infrastructure, green energy initiatives, and social programs, such as universal preschool, free community college, and money for caregivers.

Some economists have warned another round of heavy government spending would push up already rising inflation.

The federal government has already spent trillions of dollars in the past year, providing COVID relief to businesses, governments, and individuals. Biden signed the most recent measure in March, and it came with a $1.9 trillion price tag that economists say is partly to blame for rising prices.

The Consumer Price Index rose 5% in May, the highest increase since August 2008. Another indicator, the core-price index, jumped 3.8%, a rise not matched since 1992. Gasoline and food prices have jumped dramatically.

Price increases are partly due to the economy rebounding from pandemic lockdowns, but economists warn inflation could be on a permanent upswing if fueled by more government stimulus spending.

Democrats said Tuesday they are not concerned about price spikes caused by the COVID aid package. The measure provided a new round of stimulus checks as well as extra jobless pay to millions of people, money for cities and states, and help for small businesses.

“What we have been told by folks like Janet Yellen, for example, and economists on both sides of the aisle, is that worrying about inflation should be secondary to what we have just done,” Rep. Gwen Moore, a Wisconsin Democrat, said.

Democrats Wednesday met with reporters to announce they have appointed members to the newly created economic fairness panel.

Texas Democrat Vicente Gonzalez, who was appointed to the committee, said the panel was created “to assure that when we divide the pie of American prosperity, it's fair and equitable for Americans across the country, regardless of the region or the color or the religion of your background.”

Other Democrats on the panel include Progressive Caucus Chairwoman Pramila Jayapal, of Washington, and liberal House superstar Alexandria Ocasio-Cortez, of New York.

Democrats voted to create the panel in January.

Pelosi said Wednesday the committee was formed to tackle economic inequality and “intervene in the increasing divide,” as well as “end the health, economic and environmental injustice that affects people’s lives.”

The panel will study proposals to end inequalities and will make recommendations.

CLICK HERE TO READ MORE IN THE WASHINGTON EXAMINER

Pelosi did not rule out considering a wealth tax on unrealized capital gains, which has become a popular Democratic talking point following a ProPublica story on the leaked tax records of the nation’s wealthiest individuals.

“The purpose of the select committee is to measure the problem and consider the solutions and that, perhaps, one of the initiatives that would be under consideration,” the California Democrat said.