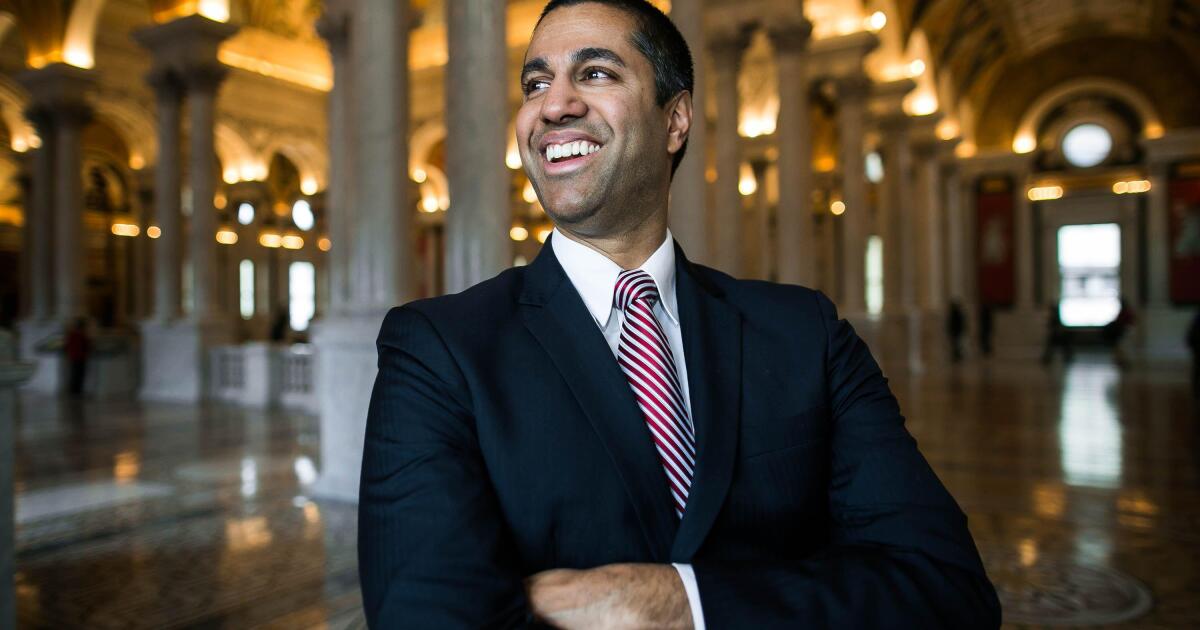 Former Federal Communications Commission Chairman Ajit Pai said some Democrats have admitted to him that they were wrong in their dire predictions about his controversial decision to remove Obama-era net neutrality rules.

“A few politicians on the other side of the aisle have told me, quietly, yes, it was a lot of sound and fury about nothing,” Pai told the Washington Examiner. “Not publicly, but privately many have apologized and recognized they were wrong about net neutrality.”

Net neutrality is the principle that internet service providers should treat all data on the internet the same and not discriminate or charge differently based on where it’s coming from or to whom it’s going. Under Pai, the FCC in 2017 voted down net neutrality rules created by the commission in 2015.

After the change, many Democrats and liberal activists issued dramatic warnings, saying that the internet would slow down, prices would rise, and internet freedoms would be destroyed.

Pai said that Democrats' predictions have not fared well.

“They said it would be the end of the internet as we know it. ‘You're going to get the internet one word at a time,' as Senate Democrats promised us in February of 2018,” said Pai.

He added that his “favorite” faulty prediction was that people would have to pay $14.99 a month to tweet.

Pai, who was nominated by then-President Donald Trump and confirmed to head the commission in 2017, stepped down from his position on Inauguration Day. He said that some Democrats acknowledged that their criticisms were political.

“They said we have to keep banging this drum because our base demands it,” Pai said.

When pressed on who these individuals were, Paid said he couldn't betray the confidence of prominent Democrats who had spoken to him in confidence.

At the center of the protest was Pai's push to undo the FCC's prior move to classify internet service providers such as AT&T and Comcast as Title II public utilities, subject to FCC control. That was done in order to impose more stringent oversight of companies, to ensure they cannot block or inhibit access to certain types of web services from different providers, or create pay-to-play fast lanes for certain content.

Despite Pai's controversial net neutrality overhaul, internet speeds saw an increase of more than 100% at the end of 2019 from the same period two years earlier, according to a new FCC report released in January. The average advertised internet broadband speed among 10 of the largest U.S. providers was 146.1 megabytes per second during the period of September-October 2019. Most internet service providers had speeds advertised or close to it, the FCC data showed, including big telecommunications companies such as Verizon, Comcast, and Cox.

Pai continues to believe in a “light touch” regulation of the internet that would boost competition and infrastructure investment. Some corporations once opposed to this approach have come around to it, he said.

“Some foreign folks in the corporate world have essentially conceded that this was more of a case of a regulatory arbitrage and a genuine concern over the future of an open internet,” Pai said.

Even nonpolitical actors have reached out to the former chairman, expressing their remorse for criticizing him so strongly.

“Just yesterday, as a matter of fact, someone tweeted at me saying, ‘I hated your guts because of this issue, but now I recognize I was wrong,'” Pai said.

The former Verizon lawyer says that the net neutrality debate has become “one of the greatest exploding cigars in public policy history.”

“And even now, as we are three years and a month since our decision, we still see people claiming that, ‘Oh, the internet is broken,'” Pai said.

Pai said he has no regrets about his decision to undo the net neutrality rules in 2017 and that the results speak for themselves.

“Fast forward to now, none of those fears have come to pass. In fact, the internet is faster than ever. Broadband speeds have doubled since we made our decision,” Pai said. “Millions more Americans have access to the internet.”