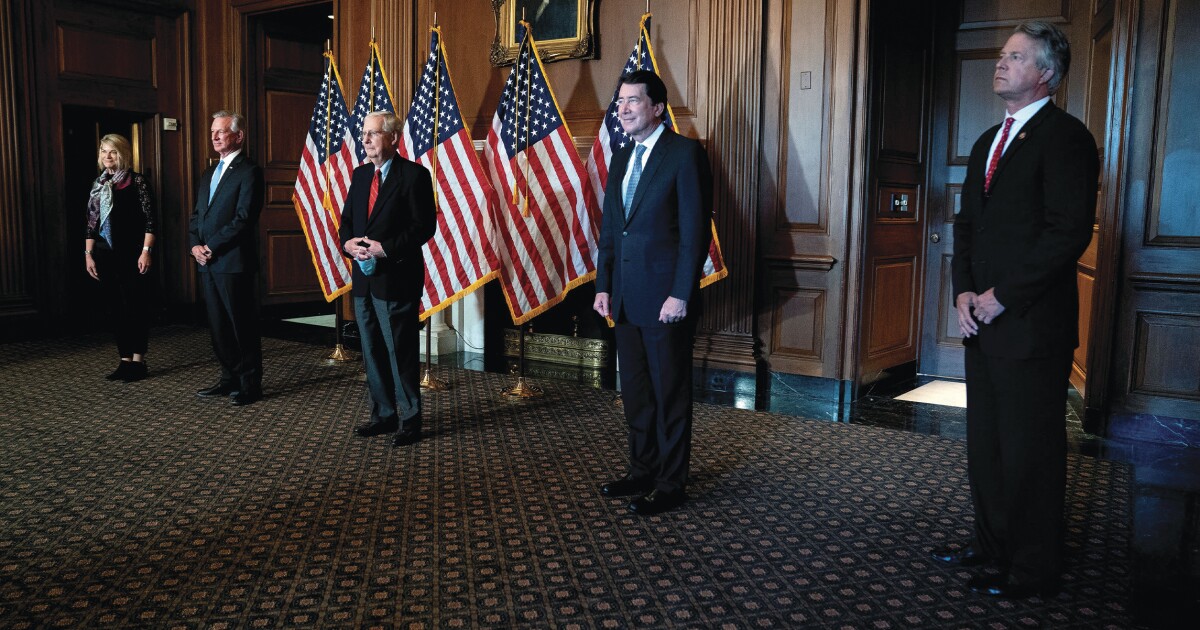 Bill Hagerty is the incoming senator-elect from Tennessee, having been elected to succeed Lamar Alexander in 2020. Hagerty is a Republican who served in President Trump’s administration as the U.S. ambassador to Japan from 2017 to 2019.

Hagerty, who is fluent in Japanese, began his career at Boston Consulting Group, culminating in a three-year stint in Tokyo, Japan. He then served as an economic adviser and White House fellow under President George H. W. Bush and served as a national finance chairman for Mitt Romney's 2008 presidential campaign. Before becoming ambassador, Hagerty spent much of his career in private equity, with Trident Capital and Hall Capital, and formed his own private equity firm, Hagerty Peterson & Company.

Born in Gallatin, Tennessee, Hagerty grew up the son of a veteran and a teacher. In high school, he raised cattle and pigs, baled hay, and earned the rank of an Eagle Scout. He received his undergraduate degree and law degree from Vanderbilt University.

Hagerty, 61, is married to Chrissy and has two daughters and two sons. He is a Christian.

The senator-elect spoke to the Washington Examiner about the 2020 election, the next coronavirus relief package, and Section 230, a law that protects internet platforms from liability for publishing third-party content.

Washington Examiner: What would be your first couple of priorities in structuring a coronavirus stimulus package if it comes to that, in January?

Bill Hagerty: First, I'm going to be very careful before getting into further stimulus discussions because we've got an unemployment rate now that's moved down below 7%. But I'm also very cognizant of the fact that we have businesses and sectors that have been so completely damaged due to no fault of their own. This virus is not the fault of these businesses that have been hurt by this virus that came from China. And so, I want the stimulus on a very targeted basis. I'm quite sympathetic to what's happened, and the areas that I would like to help are extending unemployment benefits where necessary, extending the [small-business relief] Payroll Protection Program, again, where necessary to help our small- and medium-sized businesses.

Washington Examiner: Understood. Anything else?

Hagerty: I want to look very hard at schools and what we can do to fund them as necessary to enable them to reopen safely. I'm very interested in that because if we can't get the schools to reopen, our kids are going to fall further and further behind academically. You know our schools are, regrettably, in some cases, the only place that some of our children get a healthy meal every day. And even worse, for some of our kids, it's the only safe place they have to go every day. And by the way, lots of parents don't have the ability to “work from home.” And if they can't do that, they're going to remain unemployed. So, there are many, many reasons why I think funding for schools is appropriate.

Washington Examiner: Regarding unemployment, which was one of the first things you said was important, are you open to keeping federal unemployment benefits at the level it was before it expired at about $600 per week for those struggling without jobs?

Washington Examiner: And so, what sort of unemployment spending would you be comfortable supporting instead of the $600 a week? We haven’t seen any hard evidence of the pandemic unemployment benefits disincentivizing people from returning to work on a systemic level.

Hagerty: Well, again, I'd come back to what the state unemployment benefit levels were and then look at the incremental impact of this. But I certainly wouldn't want to go as high as had occurred earlier during the pandemic. I want to find something that will help people in need but at the same time not create a disincentive to go back to work. I'm not going to put a number on it right now until I've had a chance to look to see more detail.

Washington Examiner: Another big area of disagreement has been state and local aid, which also plays a role in schools' ability to be open and local governments and all the services they offer. Both red states and blue states have had huge budget shortfalls due to the coronavirus. Is that an area that you're open to meeting Democrats on?

Hagerty: Well, I think that the Democrats have tried to use the pandemic crisis as an opportunity to go and rehabilitate state coffers. Blue states have been seriously mismanaged. And states like Tennessee have no interest in subsidizing the bad fiscal discipline, the lack of fiscal discipline in these states. I know that Nancy Pelosi from California, by the way, and Chuck Schumer from New York would love to see their states bailed out by states like mine. They'd like to see that happen.

Hagerty: I think the last thing you should do if you're trying to recover from a recession — this is what a business person instinctively would understand — the last thing you would do is raise taxes. That's precisely what Joe Biden has promised to do. What he said is he would come in and undo the 2017 tax act and the effects of that immediately. That is the absolute last thing we should do. The last thing we should do is come in and superimpose a Green New Deal on the economy and utilize regulations and more taxes, again, to stifle the economy's growth, to deepen the recession, rather than to reduce it. That's what the Democrats want to do. Policies that they want to push forward would be so disruptive to our economic recovery.

Washington Examiner: I want to ask about Section 230, the censorship protection law. This has been a big complaint among Republicans in the past few weeks with the president, the New York Post, and others being censored on Twitter. It's a burgeoning issue within the party. I wanted to hear your thoughts on Section 230 reform and the legal protections that big social media companies have at the moment.

Hagerty: It's very concerning because it seems the only conservative voices have been censored on these large platforms like Facebook and Twitter. And you've got others like the Iranian ayatollah who can talk about genocide and not be censored yet, the president of the United States is going to be censored or the New York Post, which is one of the oldest publications in the nation. This is something that's a great concern.

Washington Examiner: What sort of changes would you like to see to our legal protections to tech companies?

Hagerty: I fundamentally question whether they should operate, whether the legal exemptions from 230 should apply to them. If they want to hold themselves as arbiters of the truth, then they’re no longer functioning as a utility. So, I question the validity of the legal exemption. Overall, I'd like to spend more time with my soon-to-be-colleague Marsha Blackburn, getting into the details of it. But in my own mind, the validity of the exemption itself has been called into question, given their behavior.

Washington Examiner: Are you open to working with Democrats on areas like infrastructure, which might be a bipartisan issue, or any others?

Hagerty: Yes. I want to put infrastructure investment in the context of an investment that has to have a positive return. But I also want to be cognizant of the fact that we've run up a tremendous deficit. That is something that my children and grandchildren and your children someday and grandchildren will have to bear. So, we need to be very, very careful that any investment that we make to infrastructure has a clear payback, has got a clear return on investment.