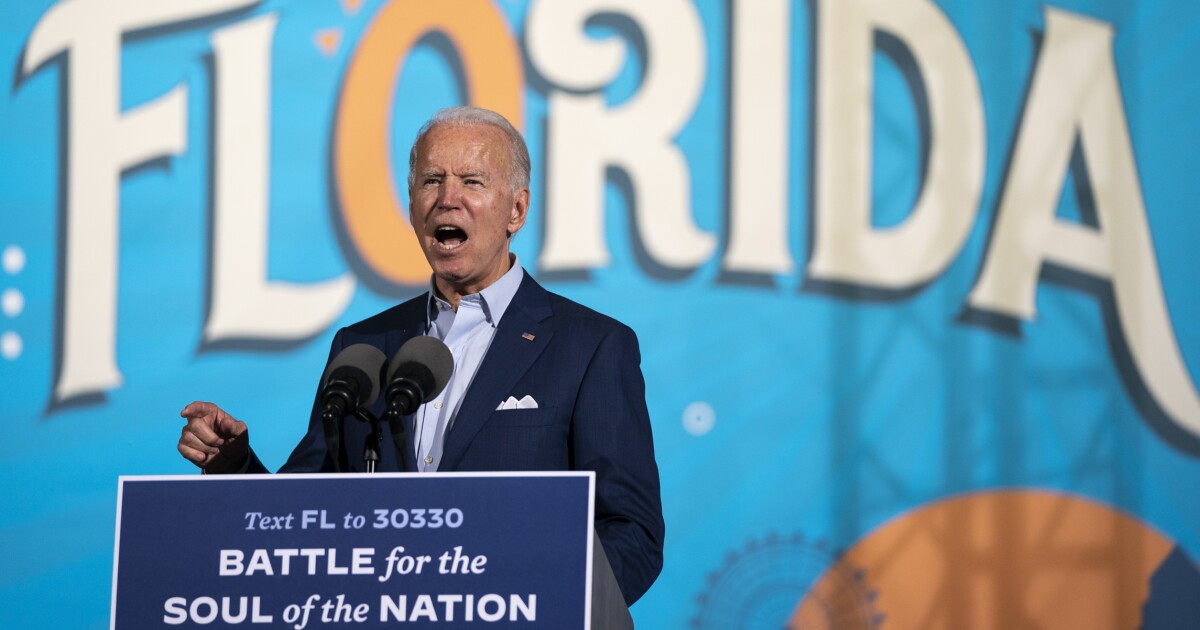 Joe Biden has said he wants to be president of all the states and doesn't see red states and blue states. But his economic policies are a de facto war against the high-growth red states of the South and the Sunbelt. We are talking about Texas, Florida, Alabama, Georgia, North Carolina, and Arizona.

The Biden plan's central idea is to impose national policies on red states that have already crippled the blue states in America, particularly states such as New York, New Jersey, Connecticut, and Massachusetts. Instead of leveling the playing field by blue states getting smart and cutting red tape and taxes, the Biden idea is to force every state to have high taxes, forced union rules, expensive green energy policies, and onerous regulations.

Consider the avalanche of Biden's policies that crush red states and, in some cases, benefit blue states. Start with the Biden plan to abolish right-to-work laws in 26 states (mostly in the South). For the past 20 years, the right-to-work states have created twice as many jobs as the blue states. Auto and steel factories, light manufacturing, and even tech firms have left the Northeast and Midwest and come to Dixie to avoid the unions. They would have to deal with the labor unions in the South just as they do now in the Rust Belt. It erodes the South's competitive advantage.

The same goes for the Democrats' $15-an-hour minimum wage. Blue states such as New York already have or are headed toward $15 wage requirements. They don't need Washington to mandate it. But the South is a lower-wage- and lower-cost-of-living region. Companies move there to cut costs. The lower unemployment rates in this region speak to the foolishness of very high minimum wage laws. Under Biden, the lower wage advantage of states such as Arkansas and Alabama disappears, and unemployment skyrockets.

Another priority for the Democrats and Biden is eliminating the $10,000 cap on state and local tax deductions on federal taxes. It is a massive tax giveaway to millionaires and billionaires in blue states with very high taxes. California, New York, and Illinois are by far the biggest winners here. The reason liberals in the Northeast are so insistent on bringing back this deduction is that it allows these states to export 40% of their high taxes onto the backs of residents of low-tax states — most of which are in the South. Texas, Tennessee, and Florida have no income tax at all.

Biden's plan to abolish oil and gas drilling would crush the economies of Texas, Oklahoma, West Virginia, and Louisiana, where energy production means millions of jobs.

Finally, there is the blue state bailout that Biden supports. This would send some $400 billion a year to bankrupt states such as New York, Illinois, California, and New Jersey. They get most of the money because the funds are allocated to states with very high unemployment. But the feds can only give money to a state such as New York by taking it from the taxpayers in a state such as South Carolina. Now, taxpayers in Tennessee have to pay for the mess in New York City, Chicago, and Philadelphia.

Add all this up, and the cost to Southern states is more than $1.5 trillion over 10 years. It's an enormous tax on red-state America.

The purpose is to handicap states such as Texas and Florida and allow blue states to catch up. Meanwhile, about 3 million people have left New York, California, and Illinois over the past decade — packing up the trailers and heading south. Florida is gaining 1,000 people a day. Texas is getting nearly 600 of these blue-state refugees.

Residents of Southern states should rise in protest against policies that will make the South look like New Jersey and Rhode Island. It makes as much sense as trying to make Hong Kong look like bankrupt Venezuela. But will the voters in Florida, North Carolina, Texas, and Arizona understand this before it is too late?

What if Musk loses the Twitter case but defies the court?