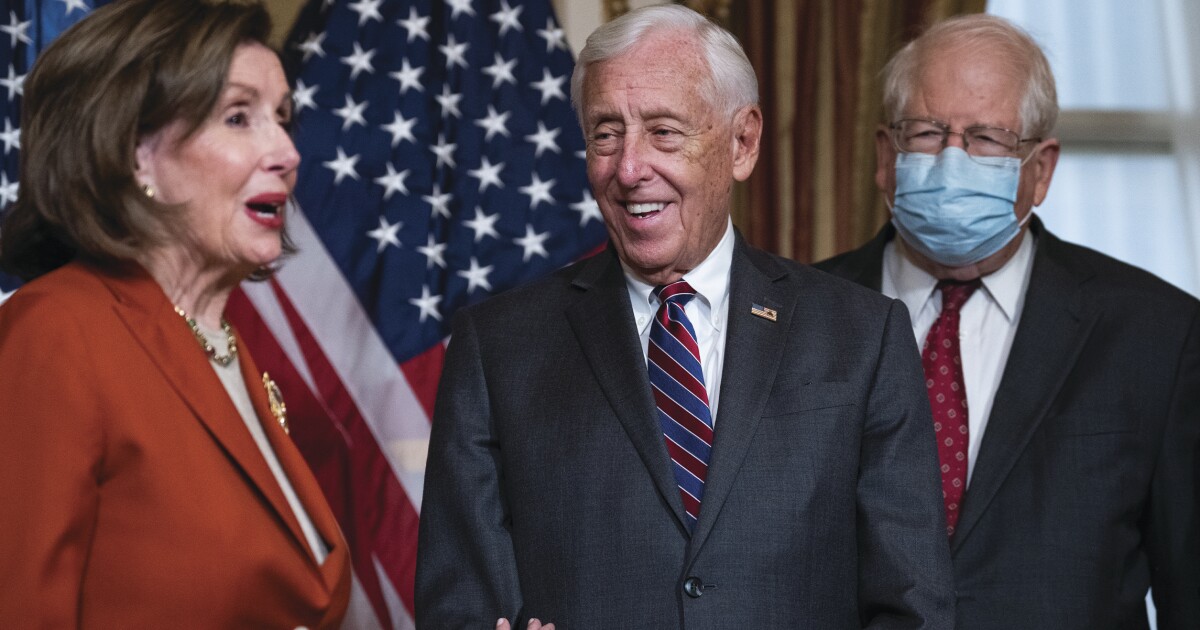 Since the beginning of the COVID-19 pandemic in March of 2020, Congress has passed and two presidents have signed into law $6 trillion in spending to treat and test for the virus and offset the economic impact of lockdowns.

In a press call with reporters this week, the No. 2 House Democrat told reporters the White House is expected to send a new emergency funding request to Congress.

“I expect there to be additional sums requested, substantial sums to be requested, to deal with and confront and try to contend with the coronavirus that has afflicted us now for almost two years,” said House Majority Leader Steny Hoyer, a Maryland Democrat.

The omicron variant has spread quickly across the nation, causing a record surge in cases and high rates of hospitalizations.

This variant is less serious, however, causing fewer deaths or severe cases. But sickness has led to worker shortages and contributed to supply chain problems.

The surge has also exposed and contributed to a significant shortage in COVID-19 tests.

Hoyer said some of the emergency funding would be dedicated to testing, preferably for free, expanding vaccinations, and providing more money for schools.

The money would also provide vaccines to other countries where vaccination rates are low.

“To the extent that there are substantial portions of the global community that are not vaccinated and still vulnerable, this global virus will continue to mutate,” Hoyer said. “And that is a danger to every American.”

The party will likely run into a buzz saw of opposition from Republicans, who believe the federal government has already spent far too much combating the virus and that the most serious aspects of the pandemic are primarily in retreat.

Republicans opposed the last round of COVID-19 aid, a $1.9 trillion bill signed into law by President Joe Biden in March.

That measure included $1,400 stimulus checks and monthly child tax credit payments of up to $300 per child.

Republicans criticized the bill as unnecessary and harmful to the economy, arguing the payments discouraged people from returning to work.

Republicans are now asking how all the money was spent.

The measure provided $47.8 billion to test and monitor COVID-19 infections and required the Department of Health and Human Services to implement a national testing strategy. Overall, Congress has passed $80 billion for COVID-19 testing.

This week, Republicans demanded to know why tests are impossible to find after Congress allotted tens of billions of dollars to provide them.

Some of the funds were diverted to dealing with the illegal immigration crisis at the southern border, Republican lawmakers said.

“Your Administration has misused taxpayer dollars to spend on items unrelated to COVID-19 and repurposed funds for the southern border crisis of your own creation,” House Ways and Means Committee Republicans wrote to Biden this week.

Republicans are also likely to balk at plans to provide schools with more COVID-19-related money.

The legislation Biden and Democrats approved last year included $125.8 billion to help schools reopen and address learning loss from long-term closures. Yet many have remained closed or re-shuttered due to the omicron surge despite the less severe nature of the variant.

The two lawmakers said the Education Department disclosed last month that only 4% of the funding had been utilized and that some of the money was dedicated to “left-wing ideological projects.”

They wrote that school closures, both intermittent and long term, had affected a million public school students.

“Democrats argued their radical spending was necessary for schools to reopen safely for in-person instruction,” McCarthy and Foxx wrote. “Republicans knew then that claim was false, and the subsequent months have proven us right.”

Senate Democrats passed the most recent rescue legislation using a procedural tactic that circumvented the Republican filibuster. It's unlikely Republicans would back another round of robust funding.

Congress is also faced with a February deadline to extend government funding, which is operating on last year's levels because the two parties have yet to agree on a long-term deal.

When asked about the timing of the bill, Hoyer told reporters there's no firm deadline.

“But it has an immediacy and an urgency that should compel us to move quickly,” Hoyer added.