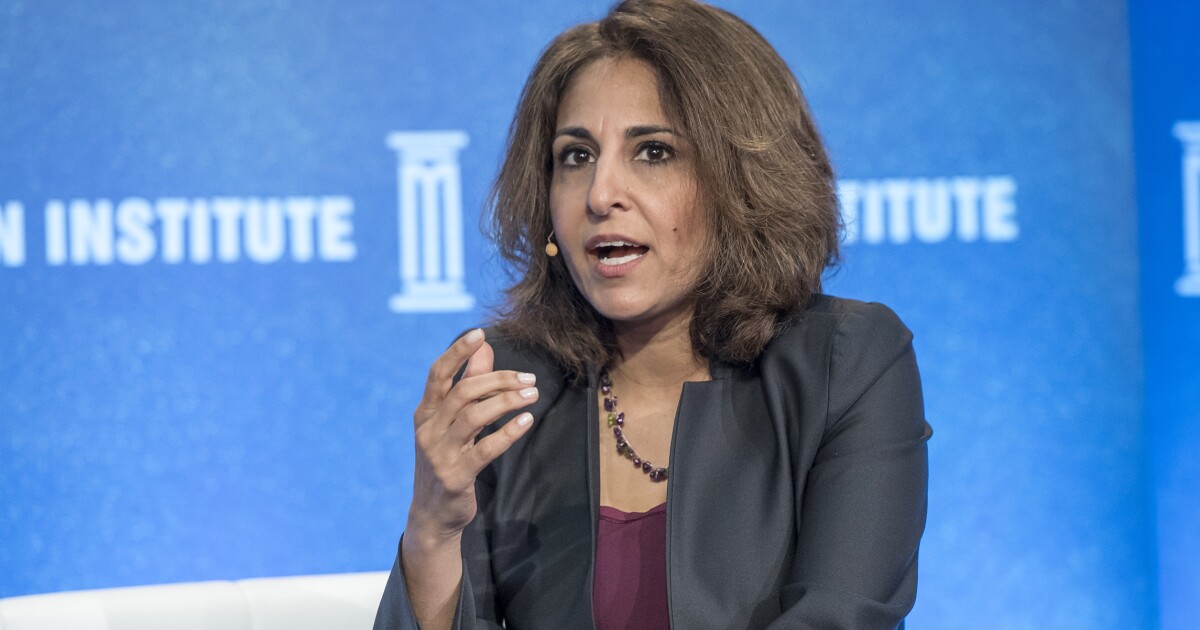 President Biden's embattled pick for White House budget chief is under fire from progressives for her previous advocacy of entitlement reform despite stating publicly that she benefited from such government programs.

Senators have voiced concerns over Neera Tanden's online rhetoric, but opposition from left-wing activists stems from the charge that she worked to implement changes to Social Security, Medicare, and Medicaid.

“I would never have had the opportunities that I’ve had in my adult life, and probably wouldn’t be sitting here today,” Tanden told the Senate Budget Committee in 2014 in testimony opposing certain benefits cuts.

Tanden pointed to her upbringing again after Joe Biden, then the president-elect, nominated her for the post in November.

“After my parents were divorced when I was young, my mother relied on public food and housing programs to get by. Now, I’m being nominated to help ensure those programs are secure, and ensure families like mine can live with dignity,” Tanden tweeted late last year. “I am beyond honored.”

Progressives point to a 2010 proposal by the Tanden-run liberal think tank Center for American Progress to cut Social Security benefits in 2012. At the time, the Obama administration favored the cuts, known as “chained CPI,” which would limit cost-of-living increases to Social Security, with Biden pushing these in negotiations with Republicans.

In a February 2012 interview, Tanden was asked by a C-SPAN caller about entitlement reform and named Social Security, Medicare, and Medicaid as possible targets for cuts, explaining that “the president has $300 million in his budget in cuts in Medicare.”

“That comes on top of cuts in Medicare for the Affordable Care Act. So, he has put specific cuts in the budget in Medicare,” Tanden said. “And they had savings in Medicaid in the past. I think the question really is: If we’re going to have a deal to address long-term deficit reduction, we need to put both entitlements on the table as well as taxes.”

Tanden said CAP had made their own proposals and cited opposition from the party's left-wing.

“We should have savings on entitlements, and the Center for American Progress has put forward ideas on proposals to reform the beneficiary structure of Social Security — some of our progressive allies aren’t as excited about that as we are,” she added. “But we’ve put those ideas on the table. We think that those are legitimate ideas that need to be part of a proposal where everyone’s at the table. We don’t just ask middle-class Americans to sacrifice. We ask all Americans.”

A CAP report two years earlier warned that “Social Security … is showing its age,” stating that proposals like lifting the payroll tax “without addressing other problems in Social Security’s benefit design would be a mistake.” The report proposed the chained CPI tax cut.

While the Obama White House later abandoned the idea, Tanden's advocacy has plagued her. Biden's involvement in the “grand bargain” was also a feature of progressive criticism during the last Democratic presidential primary.

Tanden has said in interviews that she has opposed welfare reform and rebuked claims she was actively involved in budget reform efforts.

Her name appears on several Clinton White House documents related to the implementation of reforms.

Bruce Reed, a Tanden ally and Biden's vice presidential chief of staff during the Obama administration, in a brief interview with journalist Zaid Jilani, said she played a role.

“She was obviously involved in the implementation,” Reed told Jilani in August 2016, according to a brief audio recording.

Reed came under fire from House Democrats last year for his past support for entitlement reform, with progressive Reps. Alexandria Ocasio-Cortez and Ilhan Omar signing a petition that cast him as a “deficit hawk.”

Now Biden's deputy chief of staff, Reed was credited as the architect of former President Bill Clinton's 1996 welfare reform efforts. He later led the Bowles-Simpson Commission in 2010, which crafted a sweeping deficit-reduction plan that progressives criticized because it laid out possible Social Security and Medicare cuts.

“Food stamps have been cut. Proposals to cut nutrition aid would drop children from school lunch programs. Section 8 housing and welfare aren’t keeping up with the need,” said Tanden in her Senate testimony. “I’m concerned about how the attack on these programs is going to impact people in our country because I know that I wouldn’t be here today if they hadn’t been available to me.”

Tanden's path to confirmation was made more challenging last week.

West Virginia Sen. Joe Manchin, a centrist Democrat, sent the White House into a tailspin on Friday after declaring he would vote against Tanden's confirmation.

Republican Sens. Susan Collins of Maine, Mitt Romney of Utah, and Shelley Moore Capito, also of West Virginia, centrists who met with Biden at the White House recently, said they would also vote against confirming Tanden.

If confirmed, Tanden would be the first woman and South Asian person to run the Office of Management and Budget, with White House officials suggesting in remarks to Politico that harsher criticism for her was the result of racial prejudice.

For now, the White House is standing behind Biden's pick, with press secretary Jen Psaki telling reporters Tuesday, “There's one candidate to lead the budget department: Her name is Neera Tanden.”

Democrats will need 50 votes to secure Tanden's nomination, a prospect made more challenging by the evenly divided Senate. Vice President Kamala Harris could cast the tie-breaking vote, if needed.

Psaki backed Tanden on Twitter Monday and said during her briefing that day White House officials still think Tanden could be approved by the Senate.

“Neera Tanden=accomplished policy expert, would be 1st Asian American woman to lead OMB, has lived experience having benefited from a number of federal programs as a kid,” Psaki tweeted Monday. “Looking ahead to the committee votes this week and continuing to work toward her confirmation.”

The Senate Budget Committee is set to vote on Tanden's nomination on Wednesday, with several alternative candidates floated as possible replacements if she fails to secure the necessary votes.