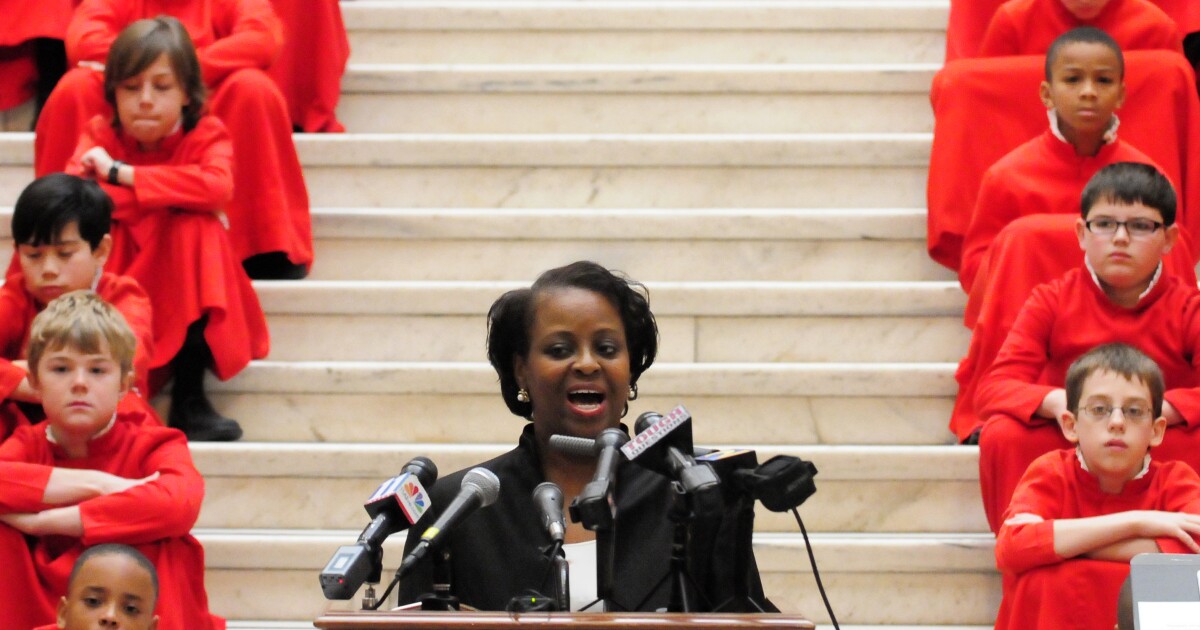 President Joe Biden’s nominee to run the Export-Import Bank is the second official he has picked to help compete with China who also serves as a strategic adviser for a group that advocates for more U.S.-China investment and has repeatedly partnered with organizations linked to the Chinese Communist Party.

Reta Jo Lewis, Biden’s pick to run EXIM who is awaiting a full Senate vote, is listed as a “strategic adviser” for the United States Heartland China Association, an organization “committed to building stronger ties” with China that regularly partners with organizations tied to the CCP’s United Front Work Department — China's foreign influence arm, which Xi Jinping described as a “magic weapon.”

Lewis's biography on the USHCA website touts her role promoting “subnational” links between the United States and China. Mitch Landrieu, who is also a USHCA adviser, was picked by Biden to be the infrastructure czar, overseeing $1.2 trillion in spending.

Former Democratic Gov. Bob Holden is the CEO of USHCA, and his LinkedIn page also says  he “helped bring the first Confucius Institute ” to Webster University.

USHCA has repeatedly partnered with the China-U.S. Exchange Foundation and the China Center for International Economic Exchanges, both of which have CCP connections.

USHCA has repeatedly partnered with the Chinese People’s Association for Friendship with Foreign Countries. The State Department said in 2020 that CPAFFC was “tasked with co-opting subnational governments” and “has sought to directly and malignly influence state and local leaders to promote the PRC’s global agenda.” Then-Secretary of State Mike Pompeo accused  CPAFFC of being part of the United Front and said it had “undermined” the U.S-China Governors Forum, announcing the U.S. was “discontinuing participation” in it.

Lewis co-wrote an article in January where she argued that “the Department of State should also reinstate the U.S.-China Governors Forum.”

Earlier this month, the Foundation for Defense of Democracies think tank reported contended that “Beijing understands that subnational political leaders respond to different incentives than do federal officials and authorities — and that those incentives may create favorable conditions for China’s influence campaigns.”

Lewis spoke at the 2012 China International Friendship Cities Conference in Chengdu, where she said she “would like to express my appreciation” to the CPAFFC, adding, “I am proud to be here to say that both Washington, D.C., and America’s subnational governments are interested in fostering better relations with China’s provinces and cities.” She also touted the memorandum of understanding signed by Sister Cities International and CPAFFC.

Pompeo noted in September 2020 these programs also “fall under the authority” of CPAFFC. A number of Republican senators introduced the Sister City Transparency Act in March to address the problem of Chinese influence at the state and local levels.

Despite these warnings, USHCA has been full steam ahead promoting the sister city efforts, including a panel in mid-November.

In her 2012 speech, Lewis noted then-Vice President Xi Jinping’s travel to Los Angeles with then-Vice President Biden “coincided with an explosion of city-to-city and state-to-province ties” and “a surge in U.S. local governments setting up trade offices in China.”

Then-Secretary of State John Kerry sent Lewis to the U.S.-China Governors Forum in Tianjin in 2013, where Xi met with U.S. governors.

During a USHCA panel in June 2020, Lewis bragged about her subnational agreement work, adding that the U.S.-China agreement “was just a high honor for me” and gave her the chance to travel to China.

And this July, USHCA spoke to the international affairs class at Missouri Girls State, with Holden telling the class that he “saw China as a potential partner to lift the economy of the region” while Lewis “discussed her work with the U.S. State Department on subnational level issues.”

Lewis has pushed for the establishment of an Office of Subnational Diplomacy — essentially reviving her since-eliminated State Department position. Her think tank blog post in 2019 pushing for the law claimed that “a recent example of successful subnational engagement occurred in May at the Fifth U.S.-China Governors Collaboration Summit” in Kentucky. She wrote a similar opinion piece for The Hill in December 2019.

Lewis is also listed as a board member of the Greater Washington China Investment Center, whose “services” include “access and introductions to city, state, and federal leaders in the United States and China.”

Lewis’s opening statement before the Senate Banking Committee in October said she would “fully implement the provisions of EXIM’s 2019 reauthorization” including “strategic competition with China.”

The Senate Banking Committee advanced Lewis by a voice vote in early November. Republican Sens. Pat Toomey, Bill Hagerty, and Cynthia Lummis were recorded as voting against her.