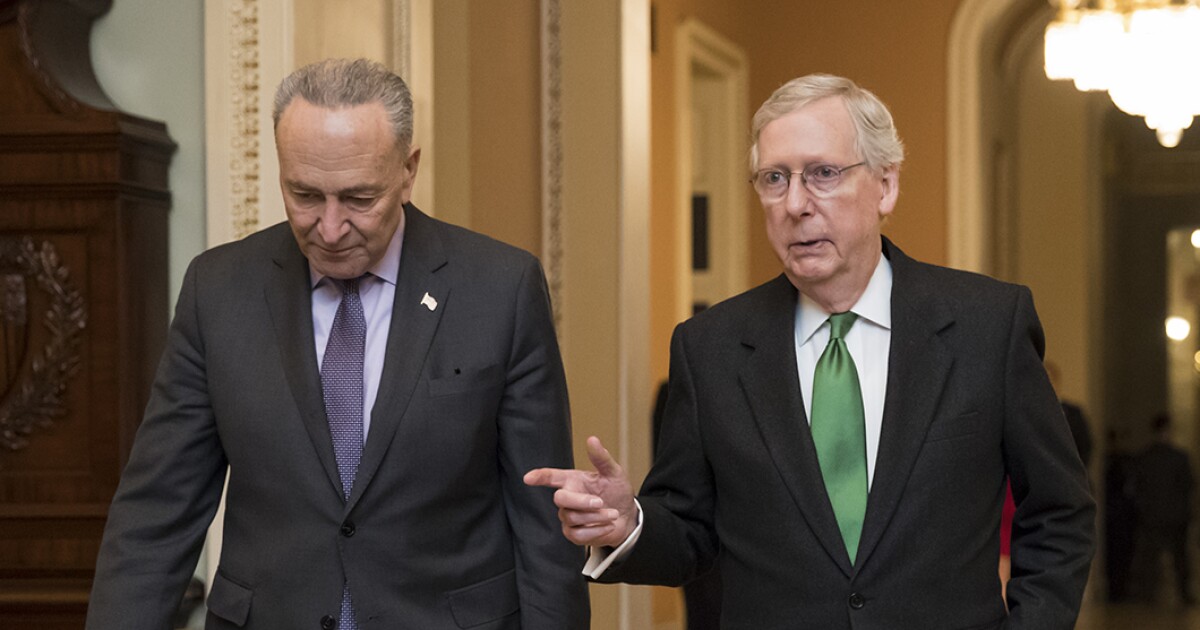 Republican and Democratic lawmakers Tuesday announced a deal ending weeks of gridlock over legislation to raise the nation’s borrowing limit.

The House and Senate will vote this week on a measure that will allow Senate Democrats to pass an increase in the debt limit without needing any Republican votes.

The accord comes ahead of a Dec. 15 deadline and follows weeks of negotiations between Democrats who run the Senate and Republicans who have refused to provide any votes for a long-term debt limit increase.

“We always said we wanted a process that was simple, not risky, not convoluted, and didn't put us through lots of different votes,” said Senate Majority Leader Chuck Schumer, a New York Democrat. “And Democrats were always willing to carry the burden. That's what's going to happen.”

The agreement allows both parties to escape blame for a legislative impasse on the debt ceiling that may have forced the United States to default on its loans , which would be economically disastrous.

Treasury Secretary Janet Yellen warned Congress the federal government would run out of money to pay its bills after Dec. 15.

The deal allows Republicans to avoid voting directly for an increase in the borrowing limit, which they say is tied to rampant and reckless spending by Democrats.

Republicans are staunchly opposed to the latest Democratic spending bill — a $1.75 trillion social welfare and green energy package that will add to the debt. Most Republicans also opposed a $1.2 trillion infrastructure measure, as well as a $1.9 trillion COVID-19 aid bill signed into law by President Joe Biden earlier this year.

“I believe we've reached a solution to the debt ceiling issue that's consistent with Republican views of raising the debt ceiling for this amount at this particular time and allows the Democrats to proudly own it, which they're happy to do,” McConnell said.

The legislation to raise the debt limit hasn't yet been introduced. It will follow House and Senate votes this week on a measure to fast-track the bill and allow 51-vote passage in the Senate, instead of the usual 60 votes. It's expected to raise the debt ceiling by about $2 trillion and would allow federal borrowing to continue until after the November 2022 elections.

Republicans said 10 GOP lawmakers would provide enough support to pass the fast-tracking measure, which is expected to come up in the Senate on Thursday, according to McConnell.

The House introduced the legislation earlier Tuesday and attached it to a measure that would stop impending cuts to Medicare reimbursement rates for healthcare providers.

McConnell is likely to face criticism from conservatives over the deal. Some wanted Republicans to block a debt limit increase, which would force the government to limit spending and make it more difficult for Democrats to focus on the $1.75 trillion social welfare and climate change bill, which Schumer said he hopes to pass by Christmas.

McConnell said Republicans “don’t agree with the way the majority operated this year” by passing trillions in spending over the objections of the GOP. He defended the deal that will ultimately give Democrats the votes they need to raise the debt ceiling.

“I think this is in the best interest of the country by avoiding default,” McConnell said.