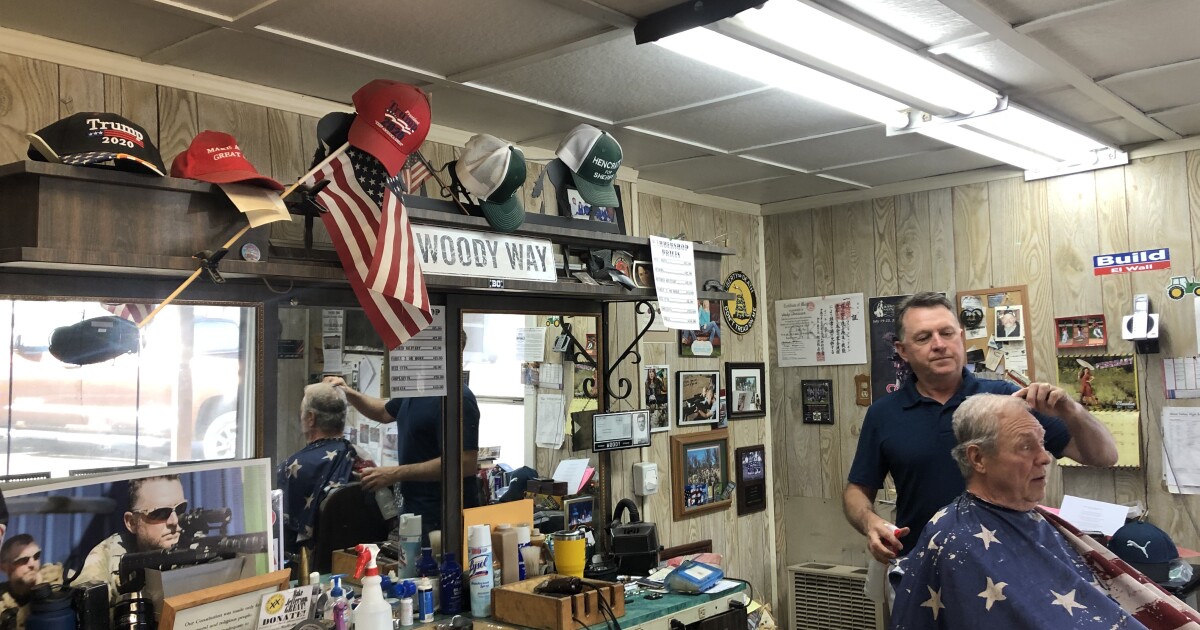 COTTONWOOD, CALIFORNIA — In Woody Clendenen's barbershop, a standard haircut costs $15. Seniors get a discount for $12, and liberals are charged $40.

At least that's what the sign at his local Cottonwood shop in Northern California‘s Shasta County says. His small business is donned with Trump 2020 gear, support to create the new state of Jefferson, and copies of the Constitution for customers to read or take.

He's got regulars who stick around just to talk politics and feel a sense of normalcy during the COVID-19 pandemic. Most of them are maskless and aren't told to follow any health precautions when they're at Cottonwood Barbershop.

Though California's often considered one of the bluest states in the country, in the rural Northstate, most locals share a similar philosophy, embracing the independent spirit of the wild, wild West.

“We're craving freedom. You feel like a free person when you talk to people in here,” said Redding resident James Gregory White, who was getting his hair cut.

White started going to Clendenen's shop early on in the pandemic because the owner made the choice never to shut down, despite Gov. Gavin Newsom implementing some of the strictest lockdowns in the country since the first COVID-19 outbreak last year.

His defiance prompted urban dwellers and people from all over the state to flock to his shop, which, at one time, was one of the only places giving haircuts in all of California.

“I will never in my life let any government agency tell me when I can work,” Clendenen told the Washington Examiner.

Clendenen, who leads the local company of the California State Militia, takes pride in his rebellion, helping to collect signatures for the recall movement against Newsom. He says if anything, his open resistance brought in more customers, and he has no concerns about potential reprimands from Sacramento.

That's just how people are in California's rural north, says Clendenen. In Cottonwood, home to roughly 3,000, every other local business seems to promote signs that they're “protected by the Second Amendment,” and masking is a personal choice.

“It's not a place that would tolerate much government interference. We're not going to tolerate them coming to our businesses and making them close down,” Clendenen said.

Shasta County remains in the state's most restrictive purple tier, indicating the county is seeing a widespread level of COVID-19. As a whole, California has had more than 3.4 million cases and more than 45,000 deaths.

In the purple tier, most nonessential businesses are expected to close.

But that's not easy for some in the Cottonwood business community. Bruce Bennett, manager of Wendy Lou's Gas Station and Mini Mart, said he couldn't afford to close even if he had to, and he would put up a fight if the state asked him to.

Jaymi Smith, Wendy Lou's assistant manager, said their gas station is the only place most people can get propane fuel, needed for the vast amount of people who work in agriculture up north.

“We never once considered shutting down. That’s not an option,” Smith said. “Fuel, propane, it's all essential for everyone’s day-to-day living around here.”

Hundreds of miles from the deep-blue cities of California, many in the north don't even affiliate with being part of the state that some say has alienated them from getting proper representation in Sacramento.

That's in part why many northerners identify with the state of Jefferson movement that seeks to break from California and create a 51st state, named for the third U.S. president.

Though the guests at Clendenen's shop discuss their dreams of leaving California for good, many residents have historical ties to the area that go back to the Dust Bowl in the 1930s, when people migrated to the state for economic opportunity. Many also have family ranches and land in the north they're not going to give up easily.

Carlos Zapata, who owns the Palomino Room restaurant in nearby Red Bluff, refused to shut down his restaurant during the pandemic. Zapata, who went viral online after delivering a vocal speech to the Shasta County Board of Supervisors over local lockdowns, said rebellion is part of the spirit of the north.

Clendenen said people up north have little in common with the central and southern part of the state and holds on to hope that one day California could be split in two.

“We don't fit in at all in California,” Clendenen said. “We don't have much in common with people that live in the Bay Area or LA. Our value systems are different. They don't like us anyway, so I don't know why they don't just let us split off.”

Until then, resistance seems to be the only option, at least in Cottonwood, which is operating largely as if it were still 2019 before the pandemic.

Steve Inns, who owns a local appliance shop in town, echoed Zapata's sentiment that a lot of Northern California holds on to the revolutionary legacy of being a part of the American frontier.

“You've got a lot of cowboys out here,” Inns said with a smile.

Cottonwood's downtown streets still have skid marks from a “Back the Blue” car show in September that brought in thousands. The town also drew the ire of some local health officials last year when it held a rodeo last May, despite restrictions on large gatherings. None of the reported COVID-19 cases traced back to the event.

Smith, who attended the car show, said the event was therapeutic, and even law enforcement joined in on the gathering.

“The car show we had last year was the absolute best gathering event that we ever had here in Cottonwood,” Smith said. “It was absolutely wonderful and beautiful to see our community come together the way we did.”

Early on in the pandemic, most law enforcement agencies in Northern California announced they wouldn't be enforcing any COVID-19 orders if someone was in violation of a public health order.

Jeremiah LaRue, the sheriff for Siskiyou County, said he felt the health guidelines should be up to personal responsibility, especially in small communities where people have a generally good relationship with local law enforcement.

“I don’t want my local people to feel that the sheriff’s department is out to get them,” LaRue said.

LaRue said he didn't want to operate like the LAPD, which was directed by Mayor Eric Garcetti to patrol city streets to put a stop to large gatherings.

And though last summer Newsom threatened to strip local governments of funding if they didn't enforce coronavirus orders, LaRue said there was no direction from the state on how to go about it.

“It’s a really impossible challenge, and there’s no money,” LaRue said. “There’s no assistance from the government, and it’s really like an unfunded mandate if it is the request of the governor to enforce these things.”

Redding Police Chief Bill Schueller said his department wanted to take an education-only approach from the very start of the pandemic. Schueller also said he had his own constitutional concerns about some of the state's demands, like when a 10 p.m. curfew was implemented last year for all nonessential workers.

“People have the right to come and go as they please,” Schueller said. “I'm not going to go knock on people's doors because they have one extra car in their driveway and their neighbor called. It's just not a job we should be doing in law enforcement.”

At least in Northern California, breaking state rules seemed to have helped local businesses, at least the ones that wear defiance as a badge of honor.

“The best thing I could have ever done is stand up for myself,” Zapata said. “Business has been thriving.”

Bennett, the gas station manager, said there's a general consensus in the town of Cottonwood that the state lockdowns were overwhelming, and he owes it to his community to stay operating as normal.