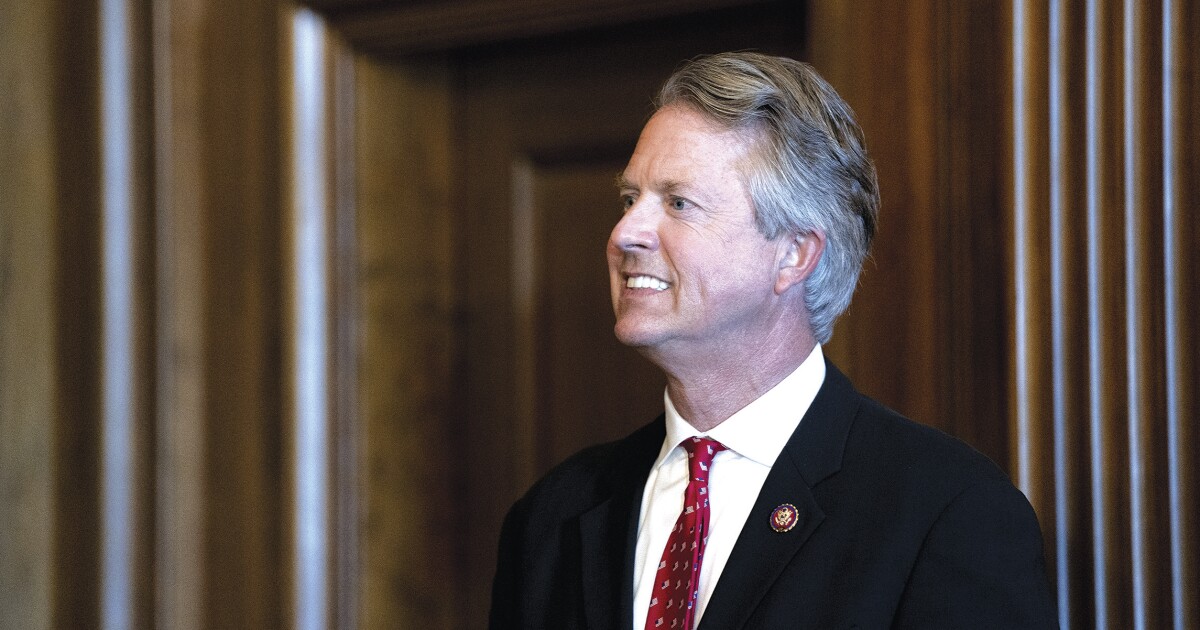 Roger Marshall is the Republican senator-elect from Kansas, having been elected to succeed Sen. Pat Roberts in 2020. He has served as the representative for Kansas's 1st Congressional District since 2017.

Marshall is a physician who served in the Army Reserve for seven years and practiced medicine in Great Bend, Kansas, for more than 25 years. As an OB-GYN, Marshall delivered more than 5,000 babies. Marshall was also a business owner for 25 years. His family continues to have business interests in healthcare, agriculture, community banking, and the oil and gas industry.

As a fifth-generation child growing up on a farm in Butler County, Kansas, Marshall became the first in his family to attend college. He received his bachelor’s degree from Kansas State University and received his medical doctorate from the University of Kansas.

Marshall, 60, lives in Great Bend with his wife, Laina. He has four children and two grandchildren.

The senator-elect spoke to the Washington Examiner about the 2020 election, the next coronavirus relief package, and what common ground he has with Democrats on economic issues.

Washington Examiner: First of all, I’m curious about your first thoughts and initial reactions on becoming a senator-elect and meeting some of your new colleagues yesterday.

Roger Marshall: Well, on the one hand, of course, we're just so honored, so excited. We've got some big boots to fill. At the same time, though, we’re still waiting on the Georgia Senate seats to fill one way or the other, but I feel very optimistic about that, and then the challenges with the presidential election, so there's a lot of uncertainty out there today as well. So I’m frustrated that we're not hitting the ground, solving problems. And with all these pieces of uncertainty, it's really hard to move forward on something like, what does the next COVID relief package look like? So anyway, I'm running in my mind and just thinking about what to do next. I guess I'm not very good at stopping and celebrating.

Washington Examiner: The stimulus package that you just alluded to, how would you go about crafting it? And what would be your priorities?

Marshall: Based on talking to hundreds, maybe thousands of people in Kansas I visited with, No. 1 is liability protection. Whether you're a small-business owner or, you know, a superintendent of schools or school board member, we need liability protection. Next, we need another bite of the apple for some folks for the Paycheck Protection Program, the most successful federal program I've ever seen rolled out. We also need some type of gap stop money for unemployment insurance benefits, but I’m happy to say that the unemployment rate in Kansas is down to under 6% already. But the aerospace industry, hotels, restaurants, some of these industries are still hurting. So some of those folks still need some help with the Paycheck Protection Program and unemployment insurance for their employers.

Washington Examiner: So how much would you be willing to spend through a package?

Marshall: That $500 billion number that Republicans have been talking about looks pretty good to me. I think that's a good number for me to start with. And the devil’s in the details in terms of what's in the $500 billion. But I ran a business before, and we all have a budget to stick to. And if I had to put down a budget number, that would be a good place to start.

Washington Examiner: That’s a good place to start. So you are open to spending significantly more than that for coronavirus relief then?

Marshall: No, no, I'm not open to much more than that. You know I'm from the business world, not the government. So you know, $500 billion, plus or minus 10%, something like that.

Washington Examiner: So it's safe to say that you're not much in support of helping state and local governments, many of which are facing incredible shortages right now. That's not something that you're particularly open to?

Washington Examiner: Any particular level of unemployment aid you’re in support of? Like an additional $300, $400, or $500 a week through the federal government?

Marshall: This last relief package amounted to paying people about $25 an hour, and that’s what [House Speaker Nancy] Pelosi still wants. And that was paying people more to stay at home than to go back to work. So I’d want maybe about half or two-thirds of what it was before, of the $600 a week that we had.

Washington Examiner: What would you do that the first couple of priorities of yours that you think you could work with Democrats on when it comes to helping Americans in a financial or economic sense?

Marshall: Well, I think it starts with sound economic policy. Hopefully, they agree that by cutting taxes, we grew the economy, and by rolling back regulations, we grew things. So I hope that Democrats are committed to a strong economy with those same basic principles.

Washington Examiner: But I think we both know very well that Democrats are not going to be in favor of cutting taxes or pulling back regulations. Are there one or two areas where you do see an opening to maybe work with them and have some common middle ground?

Marshall: I think there is a middle ground on those issues. I don't expect them to cut taxes more, but I think they could keep the current tax cuts from the [2017 tax cut] in place and make those changes permanent rather than temporary. And I think we've got to really pay attention to these regulations. I was in the private sector when Dodd-Frank hit and when [Obamacare] hit and the Clean Water Rule and everything else. Those regulations just killed our Kansas economy. So I hope that they understand that and that we can maintain the status quo here. I think there's opportunities in environmental conservation and in some healthcare opportunities and things like that.

Washington Examiner: And what about infrastructure? That's kind of a big one that a lot of folks in politics are saying could be the first big piece of legislation and obviously has huge economic ramifications.

Marshall: Yes, I do see that as a great bipartisan opportunity. And certainly, we need more roads and bridges, better roads and bridges. We need high-speed internet, all those types of things in Kansas. The challenge is how we're going to pay for it. And we're certainly ready and willing to have those discussions.

Washington Examiner: And any sort of amount that you think might be fitting, maybe a trillion dollars or a trillion and a half? And how would you pay for it?

Marshall: I don't have a number in mind. At the end of the day, I don't want to raise people's income taxes or the property taxes or all the things out there. I think it's going to have to be some type of a user fee. That would be the large chunk of it.

Washington Examiner: What do you think about our economy right now, in terms of whether you think it needs to be opened up any further than it is or that we're fine as is and we should kind of continue to a wait-and-see approach? Many conservative scholars and leaders have been pushing to reduce health restrictions and allow more commercial activity.

Marshall: I think that's a state-by-state, county-by-county decision, rather than the federal government being any more involved. Again, the vaccine will be a game changer, and I’m optimistic that we're going to see that going forward as well. I think that those decisions should be made at each local level. And it's hard to sit up here in D.C. and describe what should be happening in each state. We know the virus obviously attacks different parts of the country at different times of the year. So there's just no way in Washington [that] we should be trying to micromanage those types of decisions.

Washington Examiner: Anything else you would like to add regarding how we should be structuring the economy from your future perch in the Senate?

Marshall: My interest is in lower taxes and less regulations. So as long as we do those things, the American economy will take care of itself.