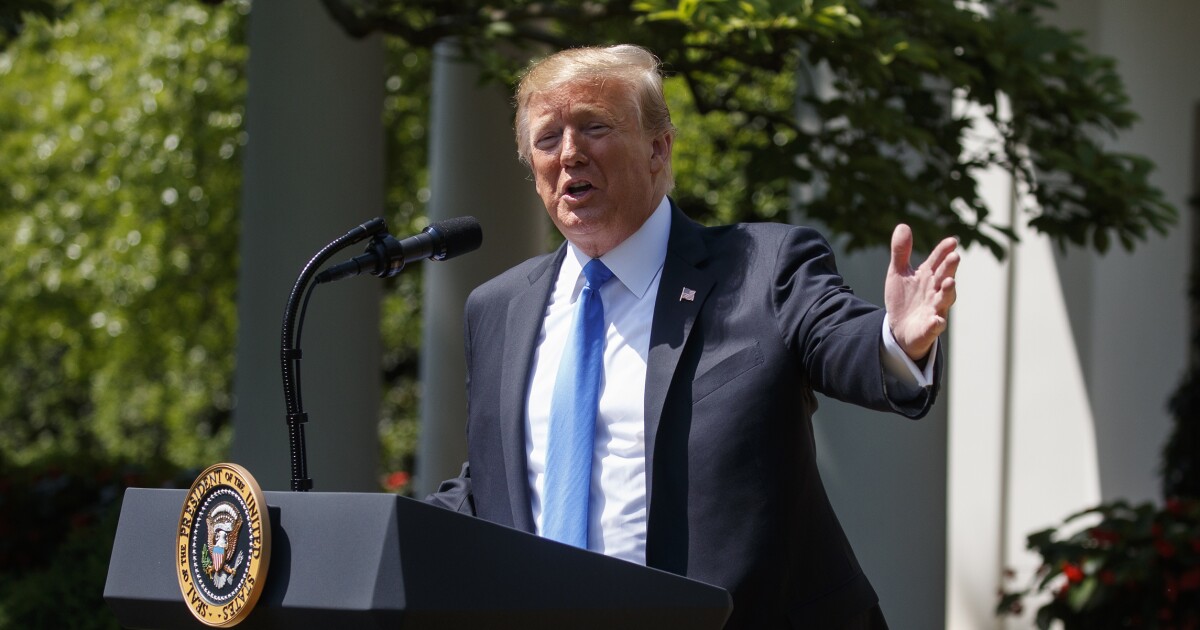 President Trump has framed his case for reelection on the fact that unemployment hit a 50-year low on his watch before the pandemic. He argues that it was his policies that lowered joblessness and that he will do it again in a second term.

Democrats, though, argue that Trump benefited from the conditions set by President Barack Obama.

At stake in the argument is Trump's first-term legacy as well as the presidency.

There's no question that the Trump years proved better for employment than mainstream economists expected. The nonpartisan Congressional Budget Office, for example, in 2016, projected that job creation would slow and that the unemployment rate would settle at about 4.9%. Instead, it fell to 3.5% in 2019. The difference between the forecast and reality is approximately 6 million more jobs.

Democrats agree on this much: A critical reason for the low unemployment rate was Federal Reserve Chairman Jay Powell’s decision not to aggressively increase interest rates and instead pursue greater total spending from 2017 to 2019, a decision that economists now believe allowed a stronger cyclical recovery. Powell was appointed to the Fed by Trump, although the president has been highly critical of him at times, saying that Powell should have cut interest rates further than he did.

Republicans argue that despite Trump’s occasional gripes with Powell, the president had a positive influence by pushing him not to get in the way of the economy and to keep interest rates reasonably low.

“Thanks to Trump policies and Powell, we smashed all predictions for job growth,” said Tomas Philipson, the former acting chair of Trump’s Council of Economic Advisers.

Decreased business costs from Trump’s aggressive deregulatory agenda also allowed new jobs to be created, said Philipson, who is now an economics professor at the University of Chicago.

In Democrats' telling, though, the credit should not go to Trump.

“Trump inherited a growing economy with momentum,” said Jared Bernstein, one of Biden’s top economists. “The Federal Reserve let that momentum take the unemployment rate down to its lowest rate in 50 years. And that's a great accomplishment. But it's not Trump's.”

“Trump inherited a certain economy. If you want to give him credit for not screwing it up until he got hit with the pandemic that he refused to deal with, that's fine. I’ll give him that,” said Bernstein, who is a member of Biden's economic transition team.

Bernstein, who served as chief economist to Vice President Biden between 2009 and 2011, admitted that the budget office, the Fed, and President Obama’s CEA were incorrect in their 2016 unemployment projections for the following years.

He said, though, that many liberal economists, including him, wrote in 2016 that the unemployment rate could go below 4% if the Fed allowed the economy to grow and wasn’t unnecessarily worried about inflationary pressures.

At the same time, Bernstein acknowledged, in 2016, that low and middle-income workers had “little to show from this expansion” during the Obama administration and that it was important that such workers “have a chance to reap the benefits of running a truly tight labor market.” The tight labor market he described did end up occurring under Trump, before the pandemic.

Economists generally agree that it's difficult to explain, in the short run, what causes the economy to behave the way it does. A multitude of factors influence the economy, and many of them are non-political.

Outside of extreme events, such as during a depression or a pandemic, presidents don't have as much influence on the performance of the economy as the public perceives, many economists argue.

Nevertheless, historically, presidents from both parties have taken credit or blame for economic booms and busts.

“It’s entirely expected, and right for the Trump administration to take credit for a strong economy before the pandemic. Any administration would do it,” said Tedeschi, who is now an economist with macroeconomic advisory firm Evercore ISI.

Tedeschi also said that Trump’s 2017 tax cut provided a “massive economic stimulus when we had room to grow,” causing employment to grow faster than it would have otherwise. He said, though, that the 2017 Tax Cuts and Jobs Act was a “tax cuts for the sake of a tax cut” and that if employment was the focus, better legislation could have been crafted.

Brian Riedl of the conservative Manhattan Institute said that it's not easy to give Trump full credit for lowering the unemployment rate because he did not push through any legislation that was directly tied to decreasing unemployment. Nevertheless, he added that the economy and job growth significantly “overachieved” from 2017 to 2019.

“Trump took office during the top of the business cycle, we should have been heading into a recession, but we didn’t. We certainly overachieved from where we were in the business cycle,” said Riedl, who was chief economist to Republican Sen. Rob Portman of Ohio from 2011 to 2017.

However, he added that factors outside of politics, such as the rate of technological change, innovation, oil prices, and business investment, often play significant roles in the growth of the economy and jobs.

“I can’t say exactly why the economy overachieved, but either way, the unemployment rate kept coming down, even though it wasn’t supposed to. It was an amazing thing to watch,” said Riedl.