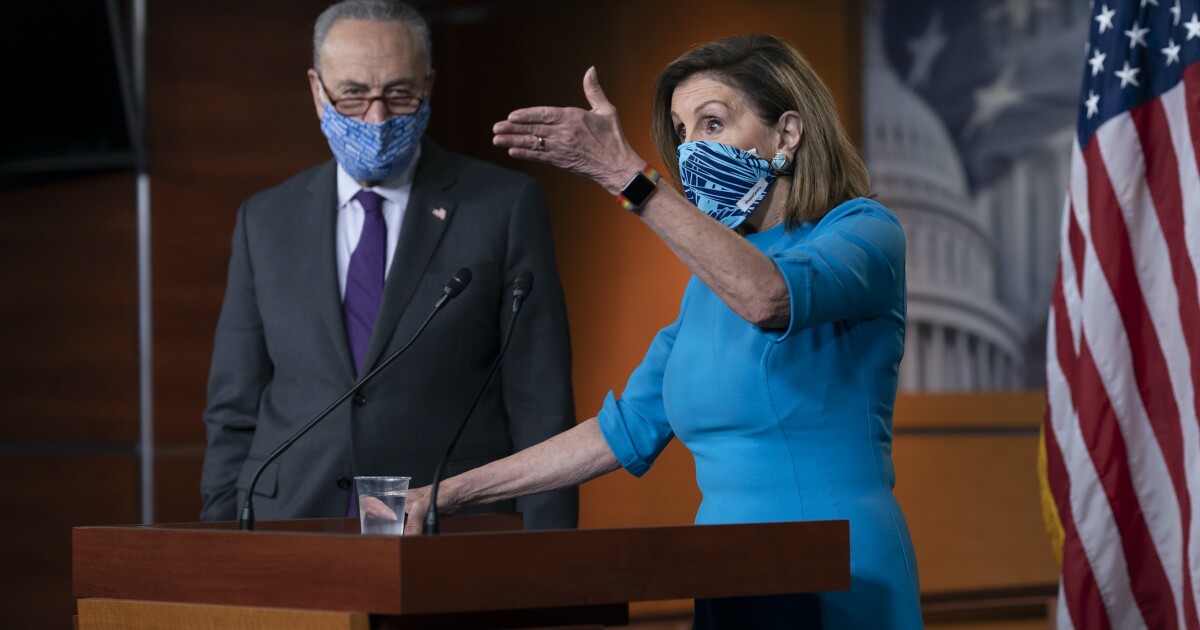 The top Democrats in the House and Senate have signaled support for a new, bipartisan coronavirus aid package as congressional leaders responded to intense pressure to pass a funding bill by the end of the year.

House Speaker Nancy Pelosi, a California Democrat, and Senate Minority Leader Chuck Schumer, a New York Democrat, said the $908 billion measure House and Senate lawmakers introduced on Tuesday should serve as the basis for a compromise bill, even though it is less than half of the spending Democrats were seeking.

“In the spirit of compromise, we believe the bipartisan framework introduced by Senators yesterday should be used as the basis for immediate bipartisan, bicameral negotiations,” Pelosi and Schumer said.

The Democratic leaders made the announcement as lawmakers ramped up pressure on top leaders in both parties to end months of stalled talks and strike a deal on a new round of aid. Coronavirus cases and hospitalizations are surging, which has triggered the return of lockdown measures and increased economic and health needs.

Fed up with the partisan stalemate on an aid deal, a large, bipartisan group of House and Senate lawmakers Tuesday announced their own proposal that meets the two parties in the middle.

The measure has the backing of the 50-member, bipartisan House Problem Solvers Caucus, as well as several senators from both parties. The proposal is larger than a $500 billion measure Republicans are seeking by far less costly than a $2.2 trillion bill Pelosi has proposed in recent weeks.
It includes many of the “must-have” ingredients each party has demanded, including some of the state and local funding desired by Democrats and lawsuit liability protections for businesses, schools, and healthcare facilities that Republicans favor.

Much of the funding comes from the last round of coronavirus aid that has not yet been spent, which appeals to GOP lawmakers concerned about the growing deficit and lack of accountability in spending.

Democrats like the time frame: The measure would provide aid until the end of March, when both parties anticipate another round of aid under a Biden administration.

In their announcement Wednesday, Pelosi and Schumer said, “We and others will offer improvements” to the proposal, which would provide nearly $230 billion in additional loans to small businesses and a $300-per-week unemployment insurance supplement.

Pelosi and Schumer cited “the urgency of meeting the needs of the American people” in their decision to back the bipartisan plan as a starting point.

They said a measure needs to move quickly to provide additional money to state and local governments for the distribution of new coronavirus vaccines.

Pelosi had up until Tuesday been negotiating with Treasury Secretary Steven Mnuchin. Pelosi and Schumer sent a new, undisclosed offer across the Capitol to Senate Majority Leader Mitch McConnell, a Kentucky Republican.

McConnell said Tuesday he plans to bring up a GOP aid package. The proposal largely mirrors the $500 billion measure Republicans voted for twice this year, but that was blocked by unanimous Democratic opposition.

Pelosi and Schumer Wednesday called on McConnell “to sit down with Democrats to finally begin a true, bipartisan effort to meet the needs of the country.”

The members of the Problem Solvers Caucus celebrated the Pelosi-Schumer announcement.

“This is a much-needed step in the right direction and a clear indication that the framework we put forward yesterday is the best path forward to getting immediate relief out to our families, small businesses, and communities,” co-Chairmen Tom Reed, a New York Republican, and Josh Gottheimer, a New Jersey Democrat, said. “With the Problem Solvers Caucus and our Senate partners working together, as we have for weeks, we are confident we can continue to build on this momentum and get a deal done quickly.”