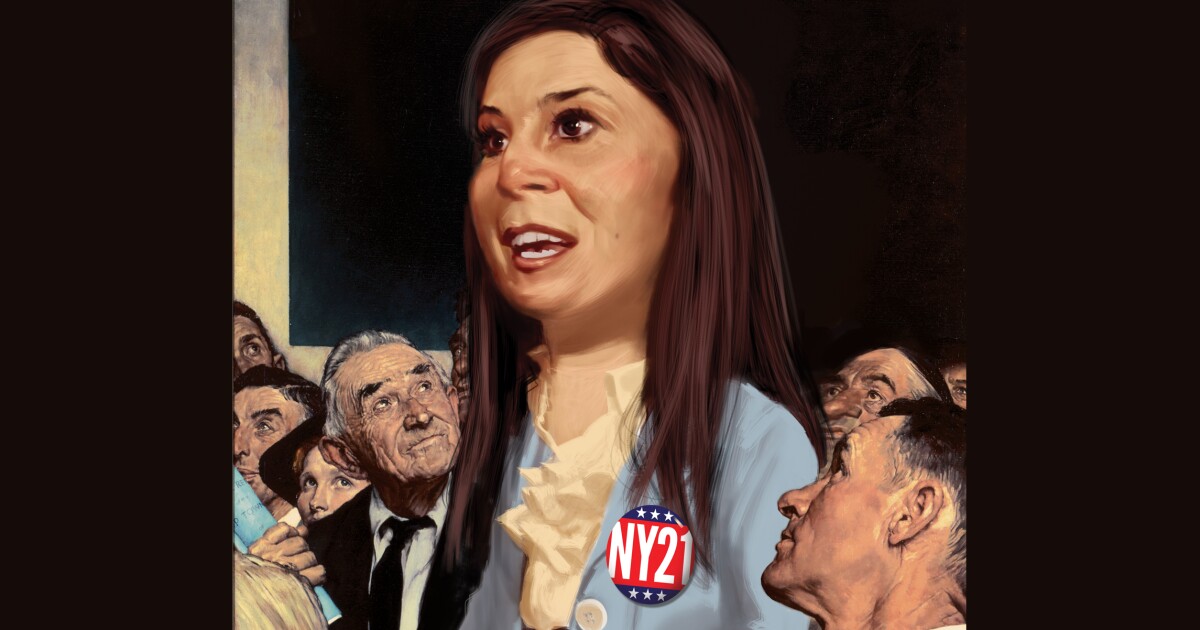 The day after President Trump endorsed Elise Stefanik, the North Country New York congresswoman discussed with the Washington Examiner the future of conservatism, the importance of community and localism in shaping the direction of the Republican Party, and where the movement goes if and when the president is no longer in the White House.

The vivacious representative, the first in her family to graduate from college, said she has stayed determined to be her own person and represent her district’s values in Washington. It has made her a darling of populist conservatives and a major target across the aisle.

WASHINGTON EXAMINER MAGAZINE: Where do you see conservatism going in the future?

ELISE STEFANIK: So, my beliefs not only were shaped from my upbringing but, particularly, serving the past three terms. I represent a district that voted for Obama twice and voted for President Trump. What I’ve found, and we’ve [found] … not only at the congressional level, but working with county, state, and local elected officials, conservatism stands for small but effective government. It stands for supporting local ideas. And not this perception that you have to go to D.C. for any policy solutions.

The best policy solutions are in communities and closest to the people. And I think President Trump has really tapped into that and expanded the electorate that votes for Republicans, who felt left behind by President Obama, who felt, in many ways, spoken down to by “the elite commentators, the cocktail circuit,” that’s really out of touch with the working class.

I think the biggest shift is, 20, 30 years ago, when I was a kid, I think there was this assumption that the Democratic Party spoke for the working class. That is not the case anymore. The Republican Party stands for workers in this country, stands for jobs and economic opportunity. The people that I represent, and I think vote Republican nationally, are not those who live on Twitter and care about what the commentators are calling this thing day to day. They’re focused on their families. They’re focused on their economic well-being and opportunity. And they’re focused on their love of American culture. And that’s not a bad thing. That’s a good thing.

WEX: Do you think conservatism is shaped not just by a party platform, but perhaps a community’s needs and people?

STEFANIK: Well, I’ll do it through the lens of my own congressional race here. I’m running; it’s a rematch. She served as a county legislator in St. Lawrence County, where, according to voter registration, it should be Democrats. They took a 20-plus-million-dollar balance in their county budget, brought into $3 million in the red. Since then, Republicans and the people, most importantly, of that district, of that county, stood up and said, “This is not right. These are hard-earned taxpayer dollars. We do not want to see more tax increases. We do not want to see this fiscal failure.”

And ever since I was elected in 2014 and since then, it’s been trending more conservative and Republican because people stood up. They understood that the Democrat tax-and-spend policies at the county level had an impact on their lives.

WEX: And so, you’re essentially saying that conservatism starts at a school board meeting, that it’s something that goes up rather than trickles down.

STEFANIK: Absolutely. And that’s what President Trump has tapped. He does not have a disdain for everyday people’s ideas. He understands that everyday people’s ideas and suggestions are what makes this country great. Rather, if you look on the other side, [you’ll see] the demeaning of people that are speaking from the heart. They’re not career politicians. They don’t live in D.C. They don’t work in politics. But they have ideas for their community. They care about economic well-being. The Democrats and the chattering class have disdain for working people in this country.

I sort of made a false assumption going into this race when we initially polled Bernie Sanders and Joe Biden. This is early this year, before it got worked out. I had falsely assumed, OK, Joe Biden is probably going to do much better among [the] working class, just because that was the kind of strategy they were running. That is not the case in my district. People have felt that the Democratic Party has left them.

The other trend I would highlight is the fact that the Democratic Party seems to only speak for urban America, and highly affluent families and people that are highly educated in the ivory tower. I represent a rural district. But we’re part of the country and part of the state where we have the highest number of veterans out of any congressional district in New York state. We have manufacturers, farms. I mean, we make things in this district. We grow things that feed New York state, that feed the country. And Democrats had forgotten how important that is to the concept of America.

WEX: Did you ever perceive that you would be part of a populist movement … and sort of a leader in it?

STEFANIK: You know, I personally have had sort of an eye-opening experience. It’s interesting. When I went to college, I was the first one in my immediate family to graduate from college. I remember what my dad said when we were shopping for some of my college stuff before moving me to Cambridge. He said, “I don’t know the best advice to give you, because I didn’t have the opportunity to go to college, but I know what’s most important is remember your values and where you came from. And we’re so proud of you.”

When I was in college, it was really striking for me just personally to see how monolithic viewpoints are that are taught in the classroom, that are discussed among students. I think my own personal path, I loved my experience as an undergraduate at Harvard, but it’s become more and more apparent to me that it’s very much out of touch with everyday people. And as I’ve got in office and spent so much time in my district, I mean, I go home every weekend, every district workweek. I live in upstate New York. I love the values here. I love the fresh air, being outside. We love our neighbors. It’s very different than the judgment and the demeaning and the assumption that Democrats often make against Trump voters, saying they’re voting for Trump because of X, Y, and Z.

So, my own personal experience, I don’t think I would envision I would have been part of conservatism, localism. But I’ve certainly lived that just seeing the disconnect between my experience in college, and as a young staffer in D.C., versus the amount of time I’m in my home community now.

WEX: What advice would you give a young person, someone who is center-right, as they go off to college, where people have become increasingly less tolerant of people who are center-right. How do you tell them how to navigate that peer pressure, as well as their instructors and culture in general?

STEFANIK: I think you have to really make sure that you stay connected to your family, friends, people that shaped you growing up and keep your two feet on the ground. I feel really just lucky that I have very grounded parents. We’re starting to hopefully have our own family. I’ve been married for a couple of years. Having that commitment to your community and appreciation and respect for where you come from, I think, is important. And when you’re in your early 20s and in college, it can get easy to be wrapped up in college life. That’s fine, but don’t forget where you came from. Don’t forget the values that got you to where you are.

I would also say if you’re in a room and all the students agree, there’s something wrong with that picture because it’s not reflective of reality. People have a diversity of views in this country. That’s what makes a really interesting and a world leader when it comes to a healthy, diverse, functioning democratic republic. I kind of touched upon that.

WEX: Do you think conservative populism, this new coalition, goes on well after President Trump’s presidency?

STEFANIK: One-hundred percent, absolutely. And I myself have been criticized from “elite establishment Republicans.” I mean, I’m someone who worked in the Bush administration. I’m proud of that. And I worked for the Romney-Ryan campaign, for Paul Ryan. But I am responsible and have been shaped by my district. That is who I represent. And that assumption they make that President Trump has caused this is wrong. President Trump has tapped into this yearning among the American people to not accept the status quo of failed policies of Washington, not just for decades, but really for two generations, multiple generations. And I think President Trump is going to win. I think so when you ask the question, what about post-Trump? I think we’re going to have President Trump for four more years. I think the siloing of the media and the disconnect is even greater than it was in 2016. I see it in my own district. And I think it’s going to go long beyond President Trump.

One thing, just the context of my district. Again, it voted for Obama twice. It voted for President Trump. It’s a bellwether. So goes my district goes the presidential. Trump is polling higher than he ever has before in this district despite the incessant attacks, not just from the national media, but even from the local media. … And we’re going to win. We’re going to win big. It’s going to be the biggest margin of any Republican in the Northeast in my race. Again, the assumptions from the editorial boards or the chattering class is very disconnected from the people, and what makes this country great is the American people.