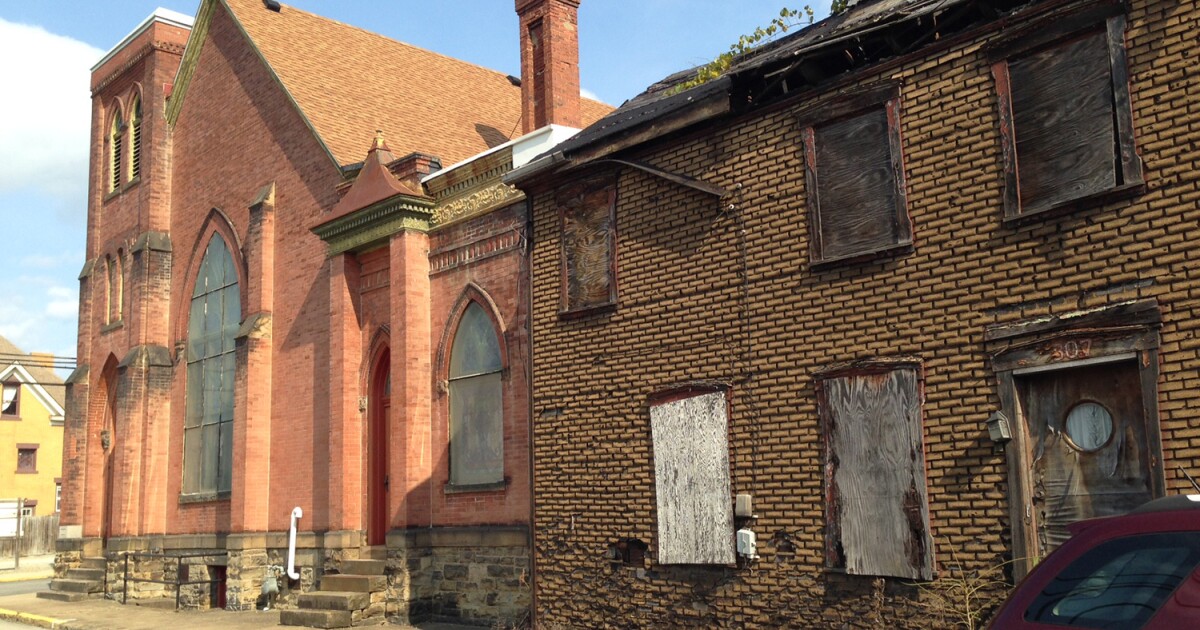 UNIONTOWN, Pennsylvania — Why don’t you leave?

That’s a question you get a lot if you’re from a place like this Fayette County city — an old steel town, auto town, coal town, or any formerly industrial small city. These are the kinds of places people call “the middle of nowhere.”

“Move, for God’s sake!” was the kind advice National Review’s Kevin Williamson gave to people living in economically suffering and socially collapsing places. “Get the hell out.”

“These people haven’t been left behind,” explained one liberal writer at Vox.com. “They’ve chosen not to keep up.”

People in the United States are moving less than we did before, and this is widely seen as a problem by economists and sociologists left, right, and center.

Many of those who live in Uniontown or Garbutt agree: They get out, or they at least wish they could. For the elite (“the mobile, global, and educated front row,” as author Chris Arnade puts it), staying in a place that doesn’t offer great economic opportunity and that is full of pitfalls such as drugs, crime, and poor public schools, the idea of staying put, seems insane.

But enough people do stay by choice that anyone who wants to understand our country needs to ask why. That is, if you’re not from here, it’s worth seriously taking time to consider the reasons why people stay.

“I would never leave,” Bob, a semi-retired 62-year-old electrician, told me at Smitty’s. Uniontown is an hour or more south of Pittsburgh. When his job used to drag him every day up to Pittsburgh, or even north of Pittsburgh, his boss suggested Bob move closer to the city. “I said, ‘F— you. I ain’t leaving.’”

This question irritated Bob, but he humored me with some reasons.

He pointed around to the scene inside Smitty’s, the venerable, dimly lit establishment nearby. Its ceiling tiles are painted in a checkered pattern of Steelers’ colors. The Tiffany-style pendant lamps hanging over the bar are antiques, Bob would explain later. The walls are covered in decorations sports-related, beer-related, and Pittsburgh-related. It really is a beautiful scene inside.

And there’s tons of room here, especially at lunch on Wednesday. All five customers can sit at the bar, which has three sides, and easily (even accidentally) comply with social distancing rules.

Every time I’ve been to Smitty’s, I’ve found a welcoming clientele and staff, good beer, and delicious food.

True, the Pittsburgh area is probably the friendliest region of the U.S. — and I say that as someone with a New Yorker’s sense of friendliness. The Smitty’s crowd and staff have always treated me well despite me obviously being an outsider.

Bob was positing that bars in cities or too close to big cities are all too crowded with strangers. That’s not my experience, even before COVID-19, but he was making a broader point. He values space and quiet. “Fifteen minutes,” he says, “I could be sitting in my tree stand. It’s quiet. That’s why I live here.”

He was put off by the rapid growth in the suburbs north of Pittsburgh. “I went up to Wexford,” he said. “There used to be nothing there but cow pastures. … It was all grass. Now, it’s no grass.” Who would want to live where there is no grass?

This is actually the same complaint that white, college-educated Gen Xers in Brooklyn, New York, and Austin, Texas, make about the recent influx of newcomers. We’re losing open space. It’s getting too crowded, too loud.

If you could make sure the place where you live doesn’t grow too fast or change too rapidly, would you? If you’ve ever said, “Man, Carroll Gardens used to be so much better,” maybe you’re wishing for some of what Bob still has.

When I asked Bob about Uniontown’s real problems, including drugs, he acknowledged that they are real. “If you wanna get into trouble, I can tell you where to go,” he said, chuckling.

But importantly, trouble doesn’t come looking for you in a place such as Uniontown. As long as he stays in familiar lands, where he knows which places to avoid, Bob’s fine.

It reminded me of what Cassie, the Smitty’s bartender, told me a little over a year ago about raising her children in Uniontown. “If you want to keep your kid away from stuff, you can,” she told me. “But then, there’s parents who just go play, go do whatever, and they just let their kids run around outside, and they find the other kids whose parents might be on drugs, and that kid knew what sex was when he was in kindergarten. If you just don’t allow it, it’s fine.”

Anywhere you might live has problems you hope to avoid. It’s just that the problems of Uniontown, and of blue-collar shrinking cities and rural areas, seem to attract more notice, mockery, and scorn, Bob argues.

Pointing at the local news on the bar’s TV, where a child is being interviewed above the chyron “HAS MULLET,” Bob says, “Nobody talks about Uniontown unless it’s to say something bad. Fourteen people could get murdered overnight in Pittsburgh, but the news channels will still drive down here and tell a story about a guy who killed his wife with a turkey.”

I took it as a serious criticism of the press. Specifically, I took it as a moment to reconsider the work I have done highlighting the collapse of community and its after-effects in a place such as Uniontown. I agree I haven’t focused enough on the positive. Fayette County really is a beautiful place, with friendly people and great food. There’s a reason I keep coming back. I brought some of my children to Uniontown for a vacation in 2019. To this day, my sons still talk about the food at Smitty’s.

(Bob mentioned a turkey murder twice more, but my search for news coverage of such an event did not turn up anything.)

Angie, a woman at the bar, suggests she might leave “if it weren’t for the kid.” “The kid” is her sister’s teenage son. The father hasn’t been around in over a decade, and the boy needs two parents, so Aunt Angie is mother No. 2.

Dave, whom I met at Smitty’s in 2016, explained that he stayed in Uniontown because his elderly mother was there. She needed Dave to take care of her, and he needed her (and her Social Security income) in order to have a roof over his head.

Last August, when I met E (a black man in his 20s who grew up in nearby Brownsville), he explained that he was on the lam. Sitting on a front porch on a Saturday morning with a few friends, he was skipping parole. He’s still serving out probation in Florida, in fact, but he couldn’t help but come back to Uniontown, even though it is a parole violation. Last time he came back up here, E told me, his parole officer caught his picture in the Pittsburgh-Tribune Review while he was cooling off in a local creek on a hot day.

So, I asked E, “If you’re legally required to be in Florida” — he even had what he called “a nice home” down there — “why are you in Uniontown, which you believe doesn’t ‘want you to thrive'?”

When he complained, “I gotta go back to Sarasota,” I asked if it’s really that bad. “It’s beautiful down there. I just don’t want to go back.”

I kept pressing him.

That’s when an older friend on the front porch named “T,” probably in his 60s, piped up and spoke for the whole crowd on that porch. “Once a hood n—–, always a hood n—–.”

It’s hard for many of us to understand, because we can probably point easily to the value of where we live. College-educated professionals often live in cities that have high wages. You probably picked your college as the one that offers you the greatest value. You probably moved to the place where you could get the best job.

That’s a good thing in a lot of cases. People need to be attached to where they are. Communities, to thrive, need lots of rooted people, just as ecosystems do best when there are plenty of rooted trees. If your population is mostly the unrooted, if everyone is transactional, then you won’t ever have the social cohesion, sense of purpose, and belonging that people need.

But E got a black eye the night before after messing around with a girl who was way too young. His strongest argument for staying in Uniontown was his stated access to commitment-free sex. And recall his description of the town: “Good if you want to get shot, get stabbed, or get high. … This town don’t want you to thrive.”

Maybe the front-row people have a point, and a lot of the residents here would be best off getting up and going.

But that means leaving behind the people who simply can’t leave: Dave and his mother, Angie’s sister and her child. If you’re willing to leave behind your neighbors most in need, can you ever consider yourself a good neighbor, no matter where you end up?

If you still can’t imagine such a stubborn attachment to a place, regardless of measurable value, maybe this reflects a gap in your own experience. Somehow, maybe, there's a love you never acquired. Maybe it is you who comes from nowhere.