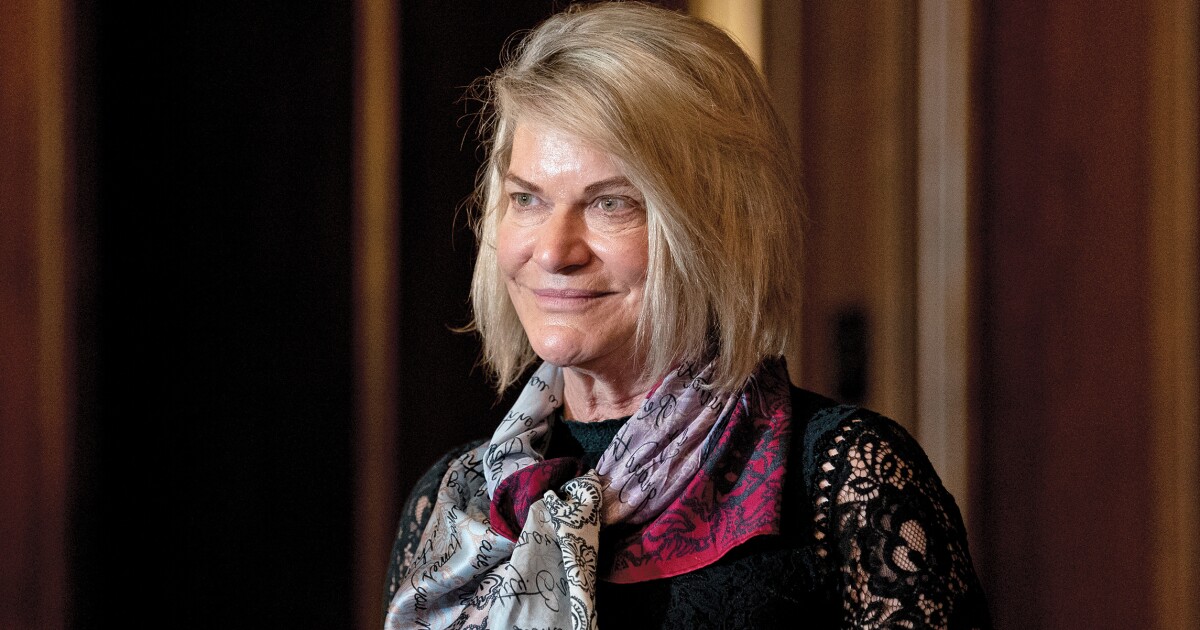 Cynthia Lummis is the Republican senator-elect from Wyoming, having been elected to succeed Mike Enzi. She will be the first woman to represent Wyoming in the Senate.

First elected to the House in 2008, she served as the representative for Wyoming's at-large congressional district from 2009 to 2017. Prior to her tenure in Congress, she served as a state representative and state senator in Wyoming and was state treasurer for almost a decade. Cynthia was a founding member of the conservative House Freedom Caucus.

Lummis, 66, received her bachelor's degrees in animal science and biology from the University of Wyoming, as well as her law degree. She operates her family’s cattle ranches in Wyoming with her brother and sister. Cynthia and her late husband, Al Wiederspahn, have one daughter, Annaliese, and a grandson.

She will become the first senator to own cryptocurrency, having bought Bitcoin in 2013 after being advised to do so by her son-in-law.

The senator-elect spoke to the Washington Examiner about the 2020 election, her passion for educating the public about Bitcoin, and Kanye West’s unexpected adventures in her state.

Washington Examiner: What do you make of the fact that there have been a number of congressmen who have accepted the results when it comes to their own elections in the House and Senate but haven't accepted the results on the presidential side, but it's the same ballots for both races, right? So, why are we accepting some results but not others?

Cynthia Lummis: It is. And I totally get it. It must be because it was the presidential ballots that were the closest races. I have wondered myself, and I don't know the answer to this. What about that Michigan Senate race involving John James? Wasn't that close enough to rise to the level of recounts audits litigation in the same way that it has been with President Trump?

Washington Examiner: But almost nobody at the Senate level or the House level seems to be asking for recounts or going through litigation, as far as I know.

Lummis: I truly have the same question. And I don't know the answer.

Washington Examiner: Delving right into legislation, what would be the first one or two bills that you would like to introduce next year, especially things that the other side might be open to as well?

Lummis: Well, there's a couple things that I think the other side might be open to. One is I want to learn more about the postal retirees investment fund. As I've been told, postal retirees have a very, very narrow list of investments that are made, and they should have a fully diversified asset allocation to invest in. Otherwise, they're not able to maximize the growth in their retirement funds. And so, that's something that I think should be very bipartisan.

Washington Examiner: That doesn’t sound too controversial. Anything on a more national scale that others might be interested in, a little more big picture?

Lummis: Yes. I want to start informing and educating members of the Senate about Bitcoin.

I really do think that Bitcoin is a good store of value. I think that very few people know about it, how it works, and how it can work right alongside fiat currency.

Washington Examiner: Do you think it can play a role in the lives of everyday Americans, though? What sort of role do you think it could play for someone that's not maybe a big investor or a large businessman?

Lummis: Well, I think early on, it could be an asset class right alongside the other assets I described. Within an investment portfolio, whether it is a Federal Employees Retirement System, whether it's 527 plans around the country, there are different compensation plans. And I think that Bitcoin should be considered and available as part of a diversified asset allocation. You know cash has inflation built into it, and that's not the case with Bitcoin. Only 21 million Bitcoin will ever be mined. And so, it is a finite resource, and scarcity helps create value, and now that it's being used as an international means of exchange, it has a long enough history, I believe, to prove the concept around the creation of Bitcoin and that it's ready for prime time now.

Washington Examiner: Do you think it is stable enough for the average American to have it a part of their daily portfolio? I know it's, like, swung between $1,000 just today, for example. Despite these huge fluctuations, can people park some money in there with some confidence?

Lummis: I believe it should be a slice of a fully diversified asset allocation. I don't want all my money in Bitcoin. I don't think you should put all your money in anything, just like I don't have all of my assets in cash. Over time, cash loses its value. But certainly, it should be part of a fully diversified asset allocation, even for individuals.

Washington Examiner: You don't see any national legislation being introduced in the next year or so related to cryptocurrency. That's not a top priority, correct?

Lummis: I think it's known that, for the next two years, it would be premature to consider any federal legislation. So, we probably won't have new day-to-day cryptocurrency trading in the next two years by virtue of the federal government.

Washington Examiner: We've had a much stronger recovery than many had expected, many economists had predicted. However, I’m curious to know how those who are most vulnerable in Wyoming have been impacted? Those who are unemployed or financially struggling.

Lummis: Well, I would point first to the Wind River Indian Reservation. That is where poverty, coupled with COVID, has intersected in the most negative way. For example, one transient Indian [that] came through the reservation area had symptoms of COVID, and the only transportation for him to the Indian Health Service was by way of the back of a pickup. So, these are the kinds of challenges that the Eastern Shoshone and Northern Arapaho Indian tribes are facing in Wyoming. So, if I were pointing to a population that is the most in need of attention, it would be the Wind River Indian population, which is both Shoshone and Arapaho tribes. So, that's where I'd start. We have had pretty good success with keeping our COVID numbers low through the first wave in the spring. But the second wave in the fall has been more devastating for us.

Washington Examiner: A lot of Republicans like yourself are not in favor of a federal unemployment boost. Is there anything else that you think needs to be done or should be done for those who are unemployed or struggling to put food and rent on the table?

Lummis: Yes. It appears, at least for me right now, that the federal component of benefits to the unemployed could be allowed to expire and that state unemployment benefits are adequate to cover the needs.

Washington Examiner: You really think the state benefits are adequate in Wyoming, for example?

Lummis: Yes. I do. But if we have a COVID spike and stay way up and have extraordinary measures that need to be taken once again to close businesses, that'll be a different story. But under current circumstances, I believe that state benefits are adequate. During the time that federal benefits were paired with state benefits, we were creating a situation where it might have made more financial sense for people not to work rather than to return to work. That was really hard on our small businesses.

Washington Examiner: I have a couple of pop culture questions for you. What do you make of Kanye West being in your state? What has it been like having him there? Has that been weird or strange at all?

Lummis: You know, it's been terrific. He and Kim Kardashian put their kids in the schools in Cody, and they began to get involved with music students in the Cody High School. In some exercises, Kanye West led them through it. They are kind of regulars in downtown Cody at the restaurants. They bought a home there. They are working on understanding how you deal with sage grouse habitat and all kinds of things that I'm sure Kanye West never thought he would have to do. So, I would say he's been a force for good in Wyoming.

Washington Examiner: He hasn’t attracted undue attention or people being annoyed by him or any of his usual colorful antics, so to speak?

Lummis: Right, no. I think the answer is you'd be amazed at how seamlessly he has settled in Park County, Wyoming, and been embraced there and been supported there. And he brought in that fabulous choir to perform at the Buffalo Bill Historical Center one Sunday because he does those Sunday services, and it was absolutely stupendous. You know, this is very much a traditional values state. So, his embrace of some of those traditional values, and specifically Christian values, resonates here. You'd be amazed at how someone that looks like, based on his career, [that] Wyoming may not be the most natural fit, it really has been.

Washington Examiner: What do you make of his presidential run and if he took votes away from President Trump, for example. What are Kanye voters like?

Lummis: I can't think of any common themes, really, but they tend to be mavericks. They tend to be young, I would say that. It was kind of fun to see. But of course, this is a Trump state. Trump won Wyoming by more than 70% of the vote. Wyoming supported President Trump more than any other state in the nation.