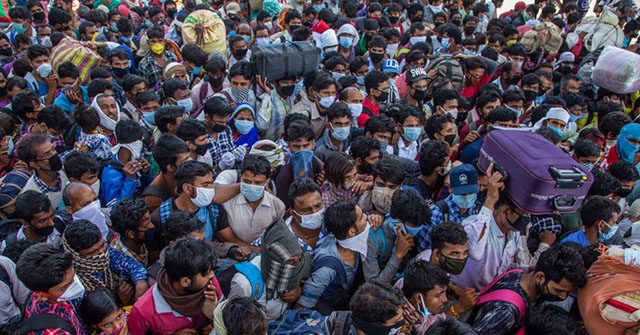 More than two-thirds of people in India aged above six years have antibodies against the Chinese coronavirus, the Times of India reported on Friday, citing a new analysis by the state-run Indian Council of Medical Research (ICMR).

“Two-thirds of the general population above the age of six, or 67.6 percent were found to have SARS-CoV-2 antibodies in the latest national serosurvey,” ICMR Director General Balram Bhargava told reporters at a press conference on Tuesday. India’s population is estimated at 1.4 billion.

SARS-CoV-2 is the name of the virus that causes the disease known as “COVID-19,” or the Chinese coronavirus. A “serosurvey,” or serology survey, involves testing blood samples for the presence of antibodies, which are specific proteins made in response to an infection that typically support immunity against future infections. Coronavirus antibodies form roughly two to three weeks post-infection.

The ICMR conducted its fourth national serology survey to test for Chinese coronavirus antibodies from June 14 through July 6. The state health body analyzed blood samples from a total of 36,227 people — including 28,975 adults and children and 7,252 healthcare workers — in 70 districts across 21 Indian states. ICMR based its latest analysis on the same geographic locations used for its previous three rounds of serology surveys.

In ICMR’s first serology survey, conducted May-June 2020, the seroprevalence for Chinese coronavirus of the tested population was 0.7 percent, the Press Trust of India (PTI) noted on Tuesday. Seroprevalence refers to the presence of antibodies in a blood sample.

“In the second survey in August-September 2020, it was 7.1 percent; in the third serosurvey conducted in December-January, 2021 it was 24.1 percent,” according to PTI.