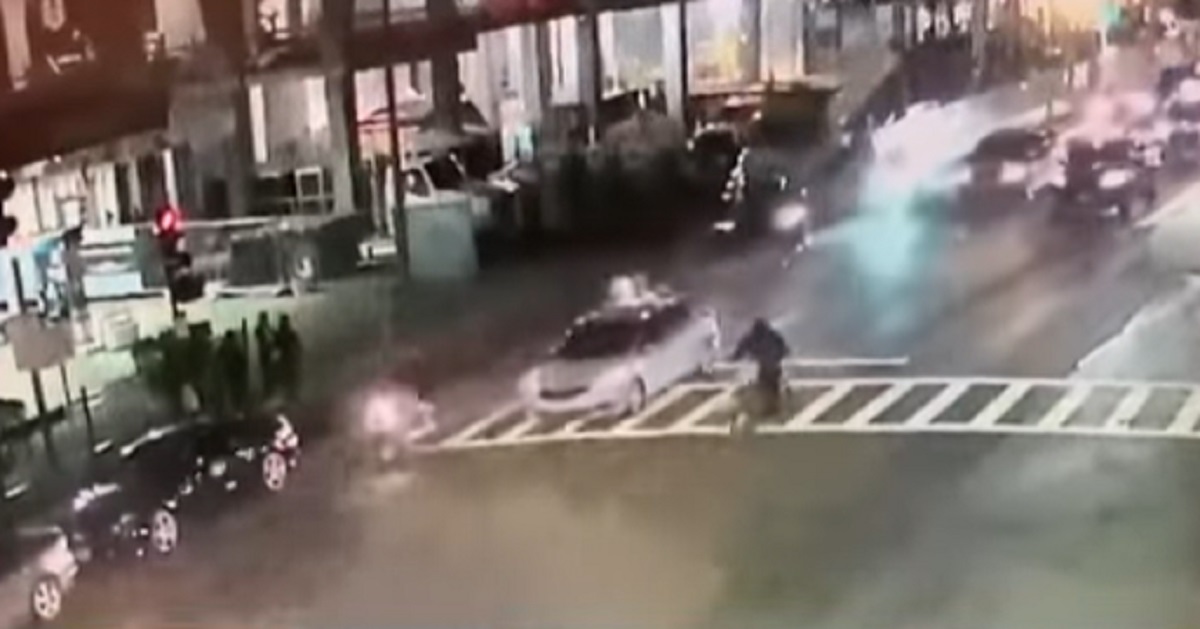 An 82-year-old man who survived a savage attack by an ATV gang has described the experience as a living “nightmare.”

“He was going to pick up a turkey. That’s all he was doing. A simple errand at 7:30 at night,” his daughter said in an interview with WCVB-TV.

“You wouldn’t think that it would be a dangerous time for someone to be out.”

Police are asking for the public’s help in identifying members of a group riding 30 to 40 ATVs and off -road motorcycles who were responsible for the incident in Boston on Nov. 18.

The attack began near Boston’s iconic Fenway Park, WCVB reported. The victim’s car was forced onto the curb where several of the riders began smashing the windows. The victim then drove over the Bowker Overpass to Storrow Drive. He was headed for a police station. The ATV gang followed.

According to police, the driver continued onto Soldiers Field Road in an attempt “to drive evasively to get away from the suspects.”  The victim got stopped in traffic on the Cambridge Street off-ramp in the Allston neighborhood. One of the riders attacked the man when he rolled down a window to plead with motorists in another vehicle to call 911, according to investigators.

The victim eventually got free of traffic and drove his battered car to a gas station. It was there he got out of the car and collapsed, as reported by WCVB. Boston EMS then arrived on the scene and transported the man to St. Elizabeth’s Medical Center.

He had recently undergone heart surgery.

Do you think this would have happened if the victim had been armed?

“The only thing he could do was protect his heart,” the daughter told reporters. “That’s why he’s got such a large bruise on his arm.”

“He wasn’t doing anything wrong,” the daughter said. “He’s simply traveling somewhere and then he gets attacked, and it’s heartbreaking for us to know that it’s not safe for our 82-year-old father to be out by himself.”

The daughter said she was, “Discouraged at humanity in general to know that someone — or more than someone — can get together and beat on a defenseless elderly man.”

The question, “Who does that?” has become all too common. I see stories like this almost every day, it seems, and wonder if they are becoming accepted as normal.

When police departments are defunded and violent criminals are set free, a civilization based on law, order and respect for human dignity — Western civilization — is in grave danger.

The question then becomes, “Who will stand up for what is right?” Who will protect the elderly from violent thugs?

Who will stand up to protect women from being raped?

As Breitbart has reported, an illegal alien in Pennsylvania stands accused of raping a woman on a train on Oct. 13.  Passengers on the train recorded the rape on cellphones instead of intervening.

Other examples are too numerous to document here.

Author Robert E. Heinlein wrote in the novel “Beyond This Horizon”: “An armed society is a polite society. Manners are good when one may have to back up his acts with his life.”

What might have happened if the elderly victim in Boston had been armed? What if the woman on the train in Pennsylvania had a gun? Cowards have been known to flee when confronted for their crimes.

If nobody will stand to protect human dignity, must men and women protect it themselves? The Second Amendment suggests as much.

The right to self-defense may be the most fundamental civil right of all. It is a God-given right protected by the U.S. Constitution.

Human dignity must be protected at any cost.