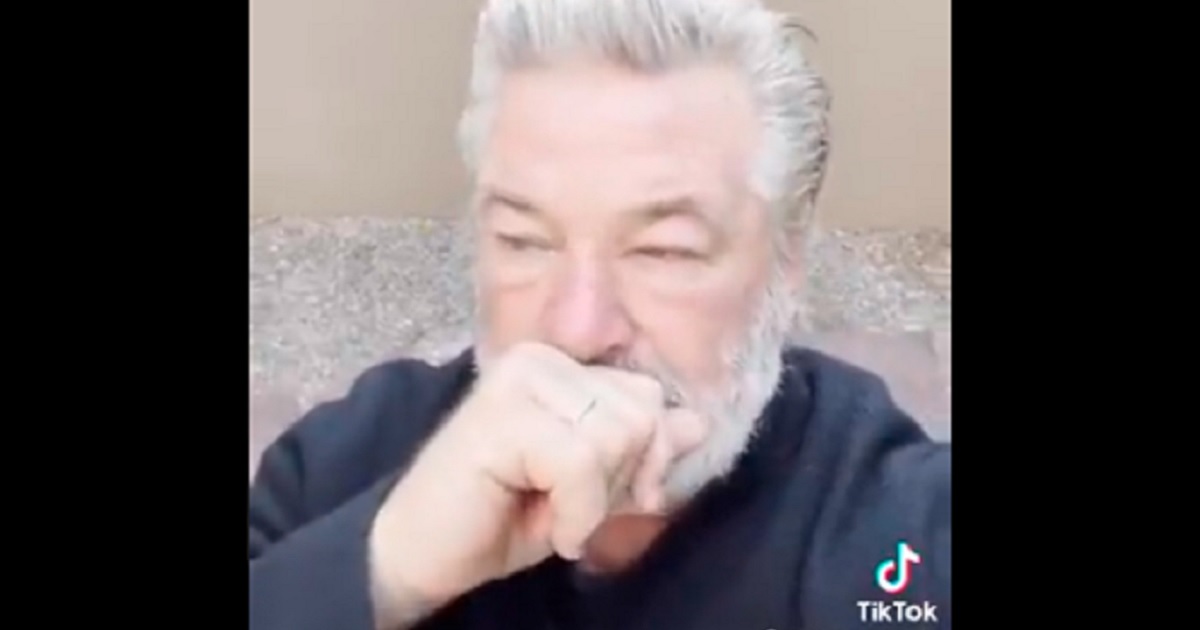 On Thursday, Alec Baldwin accidentally fired the gun that killed cinematographer Halyna Hutchins on the set of his movie “Rust.” Just a week before that incident, he was lecturing the public on safety.

“In my opinion, this is most certainly a war against this vaccine [sic], this a war,” Baldwin said in an Oct. 17 TikTok video.

Alex Baldwin one week ago on TikTok pic.twitter.com/v4sjMlN2iz

While it is true that Americans had to make sacrifices during World War II, that is hardly the same thing as forcing people to accept the injection of a vaccine into their bodies. Nonetheless, Baldwin continued with this line of thinking.

“People are being asked to make sacrifices in order to prevail in a time of war,” he said. “We are at war with the virus and its variants that keep producing, and we must make the necessary sacrifices to win that war.”

(Considering Baldwin shot the video in New Mexico on the location of the “Rust” production, it appeared he considered coronavirus infection to be the biggest threat to worker safety on the set. Events were going to prove how wrong that was.)

In addition to the ridiculous nature of comparing rubber shortages to forced medical decisions, Baldwin’s logic is flawed. There is not sufficient evidence to confirm that a 100 percent vaccination rate would win “the war” against COVID-19, especially given the number of breakthrough cases — cases where those who are vaccinated contract the disease.

While Baldwin had no problem patronizing Americans and telling them how selfish they are for choosing not to get vaccinated, he apparently did not take the time to look into other forms of safety. Namely, Baldwin’s actions last week with a firearm show a blatant disregard for basic gun safety.

Should Alec Baldwin have learned more about gun safety?

This is a perfect example of how the leftists have fetishized COVID safety theater but completely ignored proximate dangers that they could do something about — like stopping gang violence in Chicago, ending no cash bail in NYC, or — I don’t know — checking to make sure a gun you’re handed is actually safe

The California Department of Justice lists six basic safety rules for firearms. The first three tell the user to: “Treat all guns as if they are loaded,” “Keep the gun pointed in the safest possible direction,” and “Keep your finger off the trigger until you are ready to shoot.”

During the incident, Baldwin seemed to break each of these three rules, the U.K. Daily Mail reported.

The outlet reported that search warrants reveal assistant director Dave Halls gave Baldwin the gun and told him it was “cold.” Baldwin began to practice his cross draw before firing the gun, killing Hutchins and wounding director Joel Souza.

Even if Baldwin believed the gun was cold, he still should have treated it as loaded, pointed it in a safe direction, and kept his finger off the trigger. These steps would likely have prevented Hutchins’ death.

This is not to say Baldwin is criminally liable for what appears to be a tragic accident. However, if he is going to lecture the public about safety, he might be wise to do a bit more research on the matter himself.

Baldwin has long been a proponent for gun control, as Fox News reported. In 2018, he joined a celebrity coalition called No Rifle Association.

Baldwin himself also suggested in 2018 that then-NRA spokeswoman Dana Loesch was responsible for firearm-related deaths.

“I see that @DLoesch wants to ‘take back the truth,’” he wrote in a Twitter post. “And she doesn’t care how many dead bodies she has to step over in that pursuit. The Second Amendment is not a moral credit card that buys you all the guns you want. That law needs to be rethought.”

I see that @DLoesch wants to “take back the truth.”
And she doesn’t care how many dead bodies she has to step over in that pursuit.
The Second Amendment is not a moral credit card that buys you all the guns you want.
That law needs to be rethought.

Now that Baldwin himself accidentally caused a firearm death, one can only hope people have more compassion than he showed with Dana Loesch.

Stacey Abrams Insists She ‘Did Not Challenge the Outcome’ of 2018 GA Gov Race, Her Words Prove Otherwise