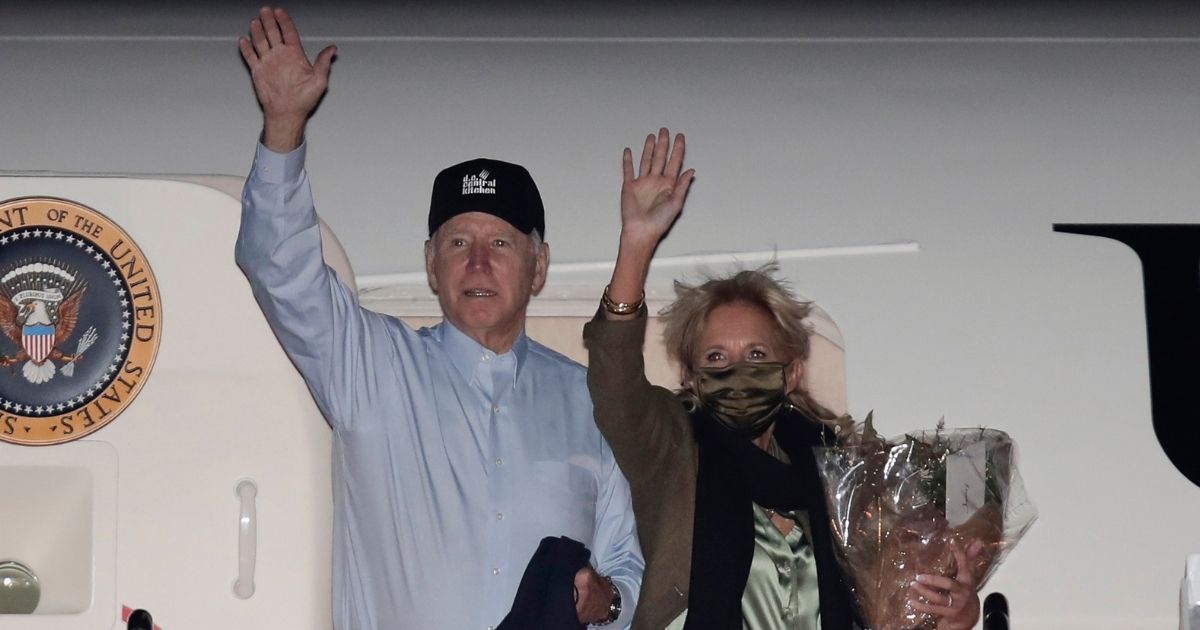 As Americans gather with family and friends to enjoy a significantly more expensive Thanksgiving, President Joe Biden and his family are headed off to the exclusive estate of a billionaire friend.

The Farm Bureau reported that the typical Thanksgiving meal is up 14 percent from last year, while turkeys are now roughly $1.50 per pound or a 24 percent increase.

Other items that have seen a noticeable rise in price include dinner rolls, up 15 percent, and frozen pie crusts, 20 percent more.

While you are in Nantucket, enjoying your meals at a billionaire’s compound, here are the prices that Americans are paying for their Thanksgiving dinner—the most expensive one in history. pic.twitter.com/M2Lr7g9Qyl

On Wednesday, before leaving for the 13 acre, $20 million estate of billionaire David Rubenstein on Nantucket Island off the coast of Massachusetts, Biden encouraged his fellow Americans to keep “perspective” on the nation’s current economic challenges, according to the New York Post.

Biden is partying in a sprawling $30 million Nantucket estate this weekend, but he thinks Americans struggling to afford food need “perspective.”

“[It’s] important to maintain perspective about where our economy stands today. The fact is, America has a lot to be proud of. We’re experiencing the strongest economic recovery in the world,” the president said in a speech on Tuesday.

Do you think Biden's Thanksgiving plans make him looked detached?

Not to sound ungrateful for the progress the country has made since the COVID shutdowns of the spring of 2020, but Biden’s statement is actually false.

As the U.S. weathers its worst inflation in 31 years, the Real Clear Politics average of polls finds Biden’s approval of the handling of the economy underwater: 37.9 percent approve, while 55.7 percent disapprove.

It should be noted the president’s exit from D.C. to Nantucket for Thanksgiving is something of a family tradition.

The Bidens have spent most of their Thanksgivings, going back to the 1970s, on the island located about 30 miles off the coast of Cape Cod.

“They stayed at Rubenstein’s compound before — once in 2014 when Biden was vice president,” according to the Post.

The estate reportedly has a pool, a tennis court and a private dock.

Rubenstein co-founded the private equity firm, The Carlyle Group, and his estimated worth is $4.6 billion, according to Forbes.

The average price of a home on Nantucket is approximately $2 million.

On Wednesday, Fox News White House correspondent Peter Doocy asked White House Press Secretary Jen Psaki what message it sends for Biden to be jetting off to a billionaire’s compound, while middle-class Americans struggle to pay for their much pricier Thanksgiving meal.

Doocy: “What message does it send to the middle-class Americans President Biden says that he’s trying to help who are struggling this wk to cover the cost of the most expensive Thanksgiving ever that [he] is going to take a few days off at a billionaire’s compound in Nantucket?” pic.twitter.com/HEHujl2Do5

Psaki answered that the administration is pushing for more relief — read more inflationary government spending — for people, and that turkeys are not much more expensive than last year.

“This is a time to put politics aside, spend time with your loved ones and talk about what you’re grateful for,” she added.

True enough. She nailed the reason for the holiday — gratitude — I would add for God’s blessings.

However, when Biden’s policies of massive government spending and curtailing energy production are, in large part, the cause of the nation’s current inflationary spike, it’s worth noting that the president’s trip to stay with his billionaire buddy does make him look detached from the reality of many Americans this Thanksgiving.

Ohio School Lunchroom Monitor Caught on Camera Bullying and Forcing a 9-Year-Old Student to Eat Food Taken Out of the Garbage As Principal Stood...