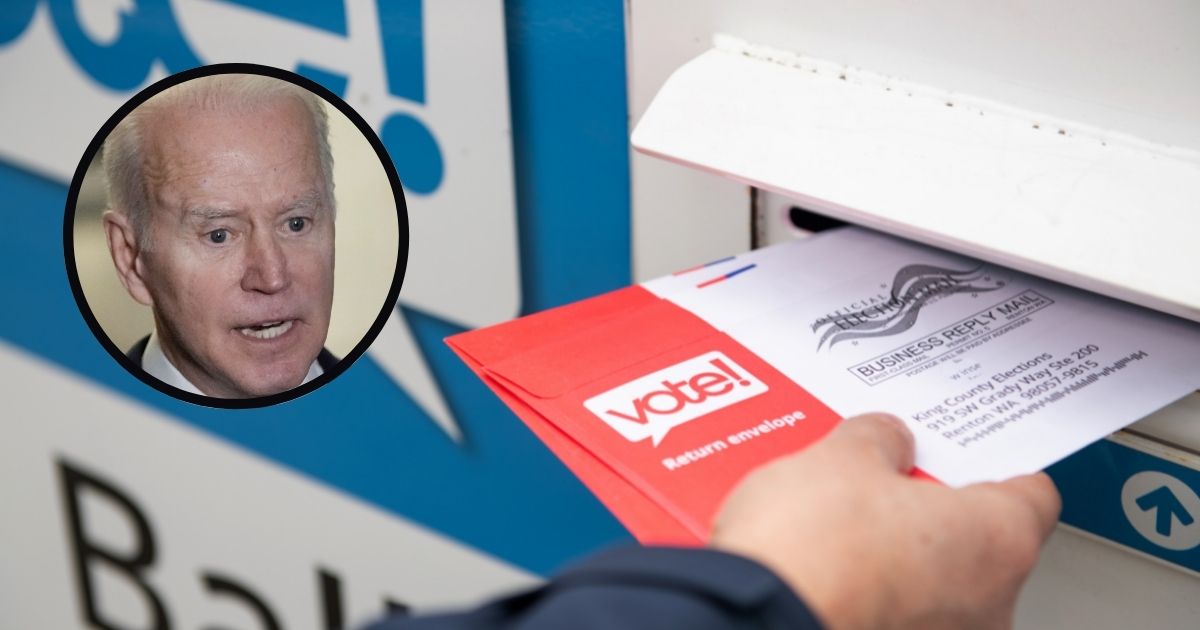 In a speech full of invectives against Republican Georgia lawmakers, President Joe Biden accused GOP politicians of trying to suppress the vote by limiting the number of ballot drop boxes.

In a Tuesday speech in Atlanta, Biden said Republicans are “putting up obstacles” to voting and thereby enacting “Jim Crow 2.0.”

“For example, voting by mail is a safe and convenient way to get more people to vote, so they’re making it harder for you to vote by mail,” the president said.

Georgia has adopted no-excuse mail-in voting, meaning anyone can ask for an absentee ballot to be sent to their home. You simply have to provide identifying information or a copy of approved forms of identification, such as a driver’s license or free voter ID card, to obtain a ballot.

So mail-in voting in Georgia is easy and available to all.

“Dropping your ballots off to secure drop boxes — it’s safe, it’s convenient and you get more people to vote. So they’re limiting the number of drop boxes and the hours you can use them,” Biden said.

Well, Georgia did not have any drop boxes before the 2020 election cycle. They were introduced as part of the state’s response to the coronavirus pandemic, The Atlanta Journal-Constitution reported.

The outlet also highlighted that 60 percent of absentee ballots in Fulton, DeKalb and Cobb counties in the Atlanta metropolitan area were delivered to drop boxes rather than mailed.

Biden called on Congress to pass the Freedom to Vote Act, “which would prevent voter suppression so that here in Georgia there’s full access to voting by mail, there are enough drop boxes during enough hours.”

Voting law adopted in Georgia last year limits the use of drop boxes to early voting locations and hours and caps the number of drop boxes at one per 100,000 active voters in the county.

The result was that the number of drop boxes in the three counties decreased from a total of 87 in 2020 to 20 during November’s election.

“Many people liked that the boxes were open 24 hours a day in 2020 and right up until the closing of the polls,” Cobb County Elections Director Janine Eveler told the Journal-Constitution.

However, concerns also arose about potential voter fraud stemming from the widespread and unprecedented use of drop boxes in Georgia.

Raffensperger’s office received a detailed complaint in November from the conservative voter integrity group True the Vote stating that it had “assembled evidence that scores of activists worked with nonprofit groups to collect and deliver thousands of absentee ballots, often during wee-hour operations, to temporary voting drop boxes distributed around the state during the pandemic.”

That would be known as ballot harvesting, which happens when someone other than the voter delivers a ballot to be counted. This practice is illegal under Georgia law, which requires absentee ballots to be either mailed in or personally delivered unless the voter is disabled, in which case a family or household member can deliver the ballot.

“True the Vote’s complaint offered Raffensperger’s office access to what are characterized as detailed phone records and surveillance video it said would show as many as 242 people repeatedly made trips to the drop boxes to deliver ballots in what it described as a mass ‘ballot trafficking operation,’” Just the News reported.

“The group said it bought commercially available geospatial mobile device data showing the locations of suspected ballot harvesters’ cell phones in the vicinity of the ballot drop boxes at the times people appeared on the surveillance footage stuffing multiple ballots into a drop box,” the outlet added.

True the Vote alleged in its complaint that surveillance video evidence suggests that “242 people engaged in a total of 5,662 ballot drops, an average of 23 runs per alleged harvester.”

The footage shows numerous instances of large numbers of ballots being stuffed into ballot boxes, True the Vote stated. Additionally, more than 40 percent of the alleged drop-offs occurred between midnight and 5 a.m., the group alleged.

Just the News further discovered last week that some of Georgia’s largest counties — including Fulton and Cobb  — no longer possess video surveillance footage of the drop boxes. DeKalb County said it believes it still has the footage, which can be obtained through an open records request.

True the Vote and other groups did obtain video footage a year ago at the start of their investigations into potential ballot harvesting. “Officials estimate that footage covers about 15% of all of the drop boxes in the major urban areas around Atlanta,” according to Just The News.

Georgians are right to be leery of having unmanned drop boxes available at all hours of the day and night.

Biden may call it “Jim Crow 2.0,” but what Georgia’s new election laws actually do is ensure the integrity of the vote.

A version of this article originally appeared on Patriot Project.