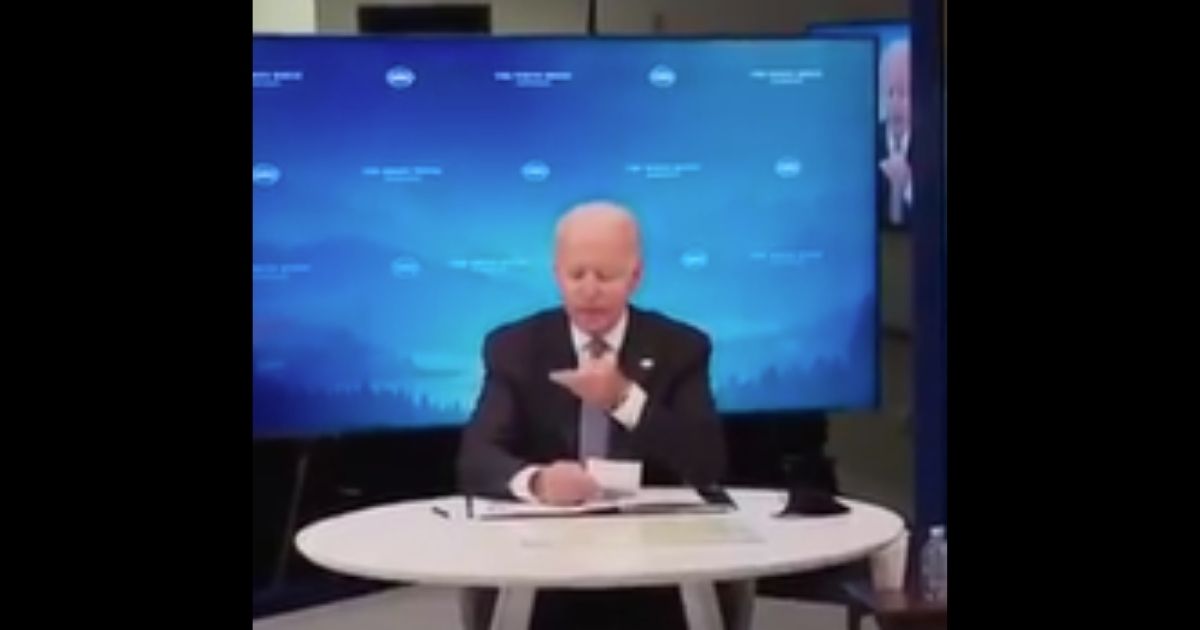 In fact, the president may have just given us his grossest gaffe yet.

Upon being handed a note by one of his handlers during a Friday meeting, President Joe Biden wiped something off his chin and appeared to eat it.

After a staffer gives Joe Biden a note saying, “there’s something on your chin,” Biden wipes his chin.

Then appears to put whatever was on his chin in his mouth? pic.twitter.com/VvN17i4IWY

Associated Press photographer Andrew Harnick managed to capture a photo of the note handed to Biden.

It read, “Sir, there is something on your chin.”

President @JoeBiden holds a card handed to him by an aide that reads “Sir, there is something on your chin” while meeting with governors to discuss wildfire prevention on the White House Campus in Washington, Friday, July 30, 2021. (@AP Photo/Andrew Harnik) @POTUS @AP_Images pic.twitter.com/uvjgsmQtnU

Is this the president of the United States of America or a middle school student?

As Biden’s time in office has progressed, his social etiquette has done the opposite.

There are numerous videos of Biden touching, sniffing and even kissing young girls during his time as vice president.

If that wasn’t disturbing enough, in this clip, Biden not only touches a young woman but smells her hair, kisses her, whispering something into her ear, only to tell her “see you back home, I hope” after visibly creeping out her and who I assume is her mother. pic.twitter.com/WrFLWmAPFJ

Biden Insults Millions of Unvaccinated Americans: ‘You're Not Nearly as Smart as I Thought You Were'

He has also lashed out at reporters on multiple occasions.

“If you don’t understand that,” Biden tells a reporter pushing him to explain how it was a constructive meeting with Putin if he still denies human rights abuses and cyber attacks, “you’re in the wrong business.”
pic.twitter.com/M4QmK7hKYd

Biden just absolutely snapped on camera when Peter Doocy calls out his conflicting statements in May on fully-vaccinated Americans not needing to wear a mask. pic.twitter.com/AqS5IchehY

Inappropriately touching children’s faces, snapping at reporters, and now wiping what is presumably partially eaten food from his chin before eating it in front of a room full of people.

This is not the sort of behavior one would expect from a mentally competent adult.

This man needs a medical evaluation.

Uvalde Teacher Texts Husband ‘Help’ During Shooting; He Interrupts His Haircut to Request 1 Weapon from the Barber