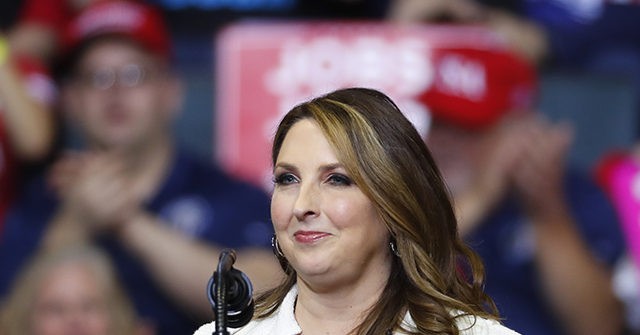 Ronna McDaniel, chair of the Republican National Committee (RNC), on Friday addressed the decision to prohibit GOP nominees from participating in Commission  on Presidential Debates (CPD).

McDaniel told “Hugh Hewitt Show” host Hugh Hewitt that the “divorce is not final” yet and likely won’t be “until August or spring at the earliest.”

“The divorce is not final,” McDaniel explained. “We do have some hoops to go through. We’ve got to get the RNC members to pass a rule change. So that won’t actually happen officially until August or spring at the earliest. We just, we have some things to do, but the Debate Committee that the RNC had voted unanimously that we want to remove ourselves from the Commission on Presidential Debates.”

McDaniel then railed against the CPD, saying it has “no interest in working with the Republican Party” and has “a total monopoly.”

“I think for us, it’s that the commission had no interest in working with the Republican Party, which represents 74 million voters,” she explained. “And what they’ve done is they’ve set up a system where we’ll only work with the nominee. But by the time the nominee is in place, which is after the convention in 2024, the debates are all set. So they have total control and a total monopoly.”

“And there were three things that were really egregious in 2020,” McDaniel continued. “They picked a moderator that worked for Joe Biden. They started debates after a million votes had been cast. We asked them to start debates before early voting starts. And I think the third is they had members of their commission that were vocally disparaging the Republican candidate and allowed to stay in their role. And so, this has been a cushy job for decades. They have a total monopoly. And we said can you just guarantee us that you won’t pick a moderator that worked for the Democrat candidate? They won’t even say yes to that.”