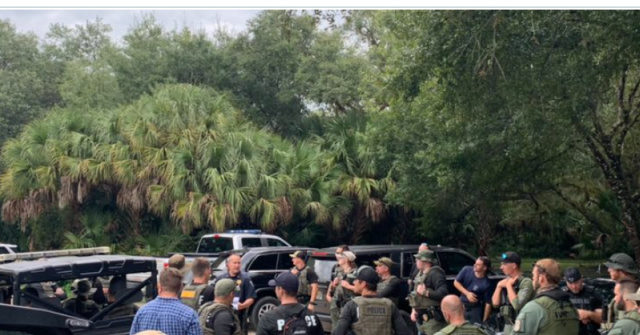 Authorities are searching in a “vast” Florida preserve after the family of Brian Laundrie, the boyfriend of Gabby Petito, who went missing while the pair were on a cross-country journey, said his location was also unknown.

“Be advised that the whereabouts of Brian Laundrie are currently unknown,” the family’s attorney stated Friday. “The FBI is currently at the Laundrie residence removing property to assist in locating Brian. As of now the FBI is now looking for both Gabby and Brian.”

The young man has not been seen since Tuesday, police and the family’s lawyer noted, according to ABC News.

North Port Police said early Saturday officers are searching “the vast Carlton Reserve,” which is a 24,565-acre preserve north of his home, for Laundrie.

The department also shared a photo of officers gathered for the search:

The North Port Police Department, FBI, and agency partners are currently conducting a search of the vast Carlton Reserve for Brian Laundrie. His family says they believe he entered the area earlier this week. More details when available. pic.twitter.com/I5x7DvQ3Jt

“His family says they believe he entered the area earlier this week. More details when available,” the post read.

The pair had been traveling across the country since June and documenting the trip online. However, “Laundrie returned home to North Port, Florida, on Sept. 1 without his girlfriend, according to police,” the ABC report said.

The young woman’s parents reported her missing on September 11 because they had not heard from her in two weeks.

The bodycam footage showed officers responding to a 911 call about a domestic incident between the two:

In response to the announcement that Laundrie’s location was unknown, a lawyer for the Petito family said, “All of Gabby’s family want the world to know that Brian is not missing, he is hiding. Gabby is missing.”

In a statement shared via Twitter on Friday, the North Port Police Department said it understood the community’s frustration regarding the case.

“For six days, the North Port Police Department and the FBI have been pleading with the family to contact investigators regarding Brian’s Fiancé Gabby Petito. Friday is the first time they have spoken with investigators in detail”:

“It is important to note that while Brian is a person of interest in Gabby’s disappearance, he is not wanted for a crime. We are not currently working a crime investigation. We are now working a multiple missing person investigations,” the department concluded.

‘What if Trump’s Grip on the GOP Isn’t as Strong as It Seems?’