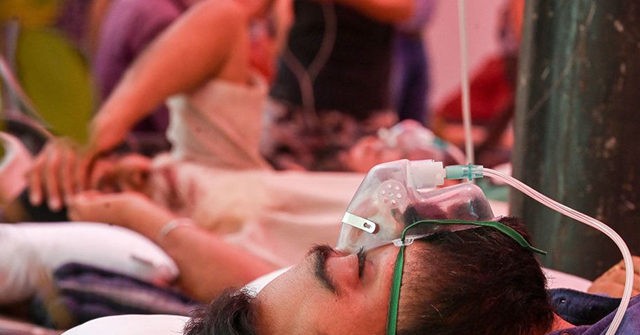 New statistics released by India’s federal government suggest the Chinese coronavirus death toll for some states was nearly nine times greater than officially documented during a period spanning March 2020 to January 19, 2022, the Hindu reported on Sunday.

According to the newspaper’s January 23 report, “6,14,211 claims of compensation for deaths due to COVID-19 [Chinese coronavirus] were filed in 20 [Indian] States against the reported death toll of 4,29,872 in those States.”

Southern India’s Telangana state “reported only 3,993 deaths but received 28,969 compensation claims,” according to the Hindu, meaning its coronavirus death toll may have been over seven times greater than officially reported.

The Hindu cited data published by the Hindustan Times on January 20 based on federal health records released by India’s Supreme Court on January 19.

“India’s cumulative COVID [Chinese coronavirus] deaths by September 2021 were 6-7 times higher than reported officially,” according to the findings of a study published by the online academic journal Science on January 6.

India is bracing for a deluge of Covid-19 cases, with authorities of various megacities bringing in restrictions. (Arun SANKAR/AFP)

The study, funded by the Canadian Institutes of Health Research, based its analysis on two Indian government data sources and one independent source. The non-state source used “mortality reported in a nationally representative telephone survey conducted by CVoter, an established, independent, private polling agency, which launched the survey on a non-profit basis to help track the pandemic,” according to the report’s authors.

The study found that “estimates of 3.1 to 3.4 million deaths from the independent COVID Tracker survey represent a national COVID death rate per million population ranging from about 2300 to 2500, or approximately 6- to 7-fold the officially reported rate on Sept 1, 2021.”

The report’s researchers documented the largest gaps between officially reported coronavirus death tolls and those suggested by independent sources such as the CVoter telephone poll “in the poorest states in central India and larger gaps among women than among men.”

The study’s authors suggested Indian state health officials had failed to sufficiently register coronavirus-caused deaths since the pandemic’s outbreak in March 2020, greatly affecting the national death toll from the disease.

“The spread of infection to rural areas in 2021 is one factor, but there might also be differences in the pathogenicity between the original virus (Wuhan) in 2020 and the mix of alpha and delta variants accounting for most of the 2021 viral wave, or other biological predictors of severe infection which changed between these two waves,” the researchers speculated.