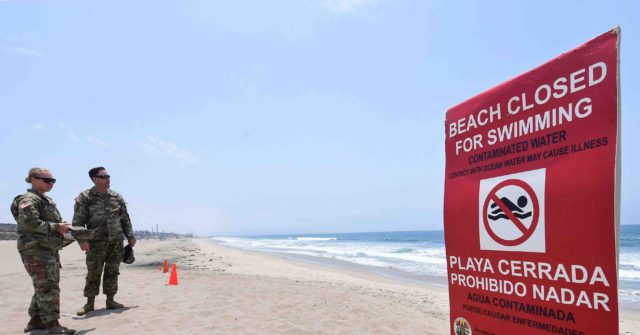 The Los Angeles Times reported Friday that the damaged Hyperion sewage treatment plant near LAX has been releasing “partially treated wastewater” into the Pacific Ocean since mid-July, unbeknownst to the public.

As Breitbart News noted earlier this month, the same facility released 17 million gallons of sewage into the ocean:

Meanwhile, in Southern California, beachgoers and local residents are furious after a major sewage treatment facility in Los Angeles discharged 17 million gallons of untreated sewage into the Santa Monica Bay, without adequate warning.

The Times reports that “debris, including wood chips, concrete, paper and grease,” had clogged the plant’s filters, leading to a discharge. Local lifeguards told Breitbart News that they had not been informed until several hours after the event.

The new report from the Times‘ Robert J. Lopez reveals that dangerous effluent has continued to be released from the damaged plant, in excess of allowed toxicity levels:

More than two weeks after a flood of raw sewage inundated the Hyperion Water Reclamation Plant and triggered a massive discharge into Santa Monica Bay, the damaged facility has continued to release millions of gallons of partially treated wastewater into the Pacific Ocean, in violation of its environmental permit, The Times has learned.

Responding to repeated inquiries from The Times, Los Angeles city sanitation officials confirmed that the facility has violated multiple state and federal water pollution limits since an emergency discharge sent 17 million gallons of raw sewage into the waters off Dockweiler and El Segundo beaches July 11 and 12. The surge of wastewater sent workers fleeing for their lives and has left the plant in a damaged state.

Residents who live near the plant, as well as environmental experts, say city sanitation officials should have informed the public that the facility has been releasing partially treated wastewater into the ocean.

Mayor Eric Garcetti made environmental restoration a key priority when he took office in 2013, obtaining federal funds for cleaning up and beautifying the Los Angeles River.

He did not appear to have a comment on the latest revelations about Hyperion as of Friday evening, though he had issued recent press releases about DACA, COVID-19, and “reimagining public safety” (while defunding police.)