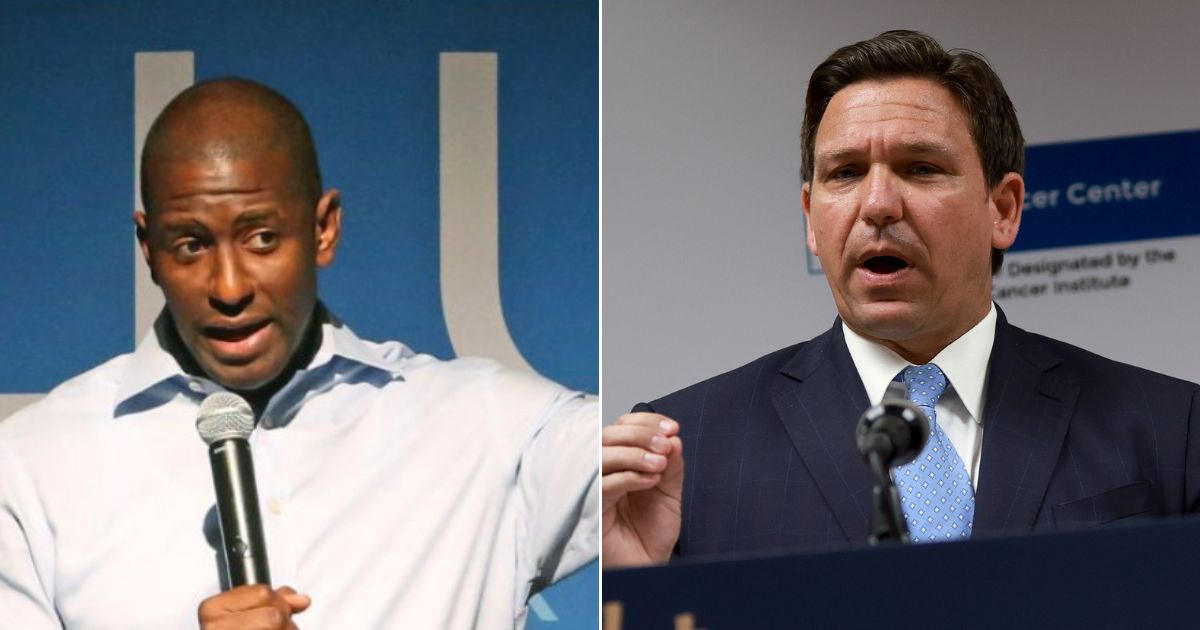 The former Democratic gubernatorial candidate was indicted Wednesday on 21 federal charges including conspiracy and 19 counts of wire fraud.

In the aftermath of Gillum’s indictment, rather than going after Gillum, DeSantis actually pointed the finger at the mainstream media for making Gillum’s candidacy possible.

When asked by an activist last week if he felt “vindicated” following the recent developments of Gillum’s legal troubles, according to Fox News, DeSantis called out the mainstream media, rather than criticizing Gillum directly.

DeSantis pointed out how the mainstream media had fawned over Gillum and said that they “propped him up,” Fox reported.

“Well, you know… I would ask a lot of the media that propped him up whether they have any type of mea culpa on that,” DeSantis said Thursday, according to Fox.

“I mean, there were clearly a lot of issues there. If you looked under the hood, you saw it, but what was presented to the public was that this guy was like the Second Coming.

“I mean, never has a candidate been elevated, I think, that way by media outlets, certainly in the last 10 years or so,” DeSantis continued. “And I can tell you – if I had not won in 2018, this state would be in much worse shape and that’s not even a question.

Do you think Ron DeSantis will run for president in 2024?

I asked @GovRonDeSantis if he feels vindicated after being called a LIAR and a RACIST for calling out @AndrewGillum for being under FBI investigation in 2018. His response is SAVAGE! 🔥 pic.twitter.com/wS2tkw35cg

This response from DeSantis is remarkable considering that during the heated gubernatorial race, Gillum’s campaign was harsh to DeSantis and even  accused him of being racist.

“First of all, he’s got neo-Nazis helping him out in this state,” Gillum said, referring to a white supremacist group that was running robo-calls against Gillum in the state (DeSantis’ campaign disavowed the calls, according to CNN).

‘Revival is Coming': Cruz Heads to Milwaukee to Fix Biden's Mess – And You Can Join Him

The jibe got headline treatment in the mainstream media outlets like ABC and CNN.

In a news release, the Department of Justice outlined its case against Gillum and Sharon Leggman-Hicks, whom CNN described as a “longtime associate” of Gillum.

“The Indictment alleges that between 2016 and 2019, defendants Gillum and Lettman-Hicks conspired to commit wire fraud, by unlawfully soliciting and obtaining funds from various entities and individuals through false and fraudulent promises and representations that the funds would be used for a legitimate purpose. The Indictment further alleges the defendants used third parties to divert a portion of those funds to a company owned by Lettman-Hicks, who then fraudulently provided the funds, disguised as payroll payments, to Gillum for his personal use,” the release stated.

If Gillum is convicted, sentencing on the charges ranges from five years to years each, according to the release.

Considering Gillum’s harshness towards DeSantis and his crimes during the campaign that tried to bring DeSantis down, it would have been understandable with DeSantis sharply responded to Gillum’s downfall.

Instead, however, DeSantis took the “high road” and kept his comments and criticism classy as he criticized the mainstream media rather than just heaping blame on Gillum.

DeSantis was not just being classy with his comments, though. He was also pointing out the heart of the issue — the real problem — by calling out the mainstream media’s favorable treatment of Gillum during the 2018 campaign.

DeSantis won the governor’s race by a narrow margin — just over 30,000 votes out of over 8 million cast.

Floridians had special reason to be grateful for that result after a 2020 incident in which Gillum was found in an “inebriated state” by police in a Miami hotel room with two male companions and baggies of suspected methamphetamines.

One of the men appeared to be suffering a drug overdose.

Gillum announced he was going into rehab shortly after that incident, according to The Associated Press.

Gillum last week denied wrongdoing in the DOJ case and claimed the federal charges against him are politically motivated, according to The Hill.

(As commentator Charles W. Cooke pointed out on National Review after Gillum’s statement, political motivations are hard to discern when the Justice Department under Democratic President Joe Biden indicts a former Democratic celebrity like Gillum. Biden not only endorsed Gillum in 2018, Cooke noted, he campaigned for him, too.)

Gillum may have played dirty during his election campaign, but it was the mainstream media that shined the bright spotlight on him and made him a darling, even though it was known that the FBI was investigating activities surrounding Gillum’s tenure as Tallahassee mayor, as Fox News reported.

The glowing treatment very nearly made Gillum the governor of Florida instead of DeSantis.

The mainstream media played the part of an enabler and DeSantis was more than right to call that out, instead of just beating up on an old opponent.