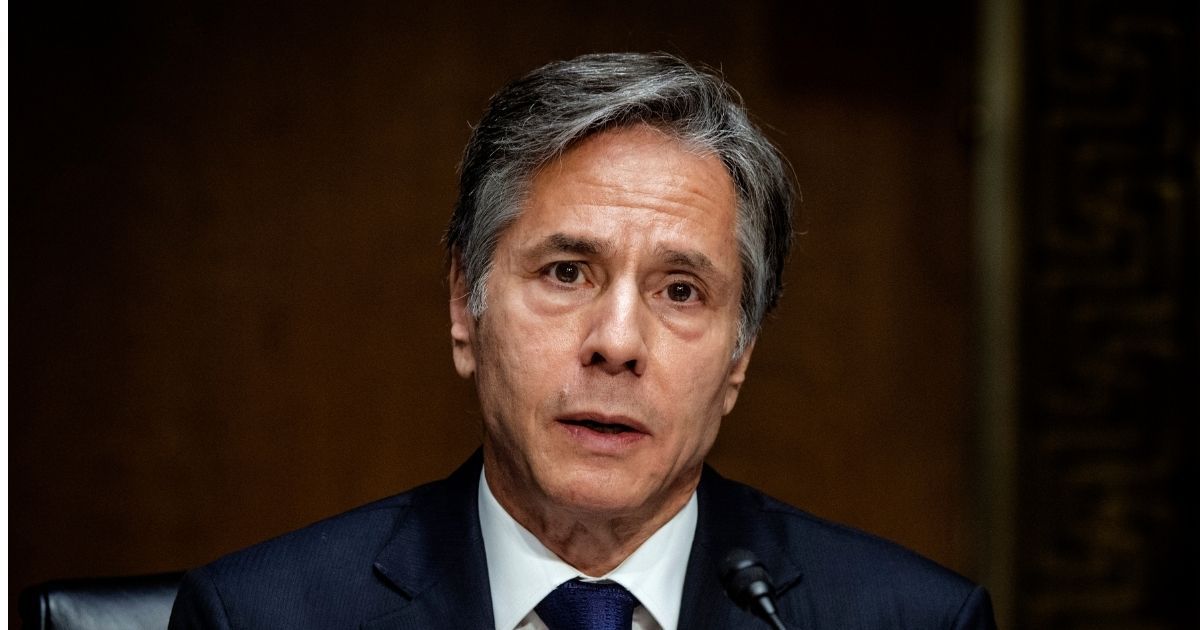 Republican Rep. Brian Mast of Florida confronted Secretary of State Antony Blinken as he testified in front of the House Foreign Affairs Committee on Monday, telling the Biden administration official he didn’t want to listen to his “lies” while demanding answers about the withdrawal of U.S. forces from Afghanistan.

Blinken appeared before the committee via video call for a postmortem following President Joe Biden’s abrupt end to the 20-year war in an exit that went horribly wrong.

As American forces followed their orders to leave by Aug. 31 — handing the country back to the Taliban and stranding Americans in what’s sure to become increasingly hostile territory — 13 service members and hundreds of civilians died in an Aug. 26 terrorist attack near the Kabul airport where evacuations were taking place.

While one tragedy piled atop another, a leaked transcript from a July 23 call between Biden and then-Afghan President Ashraf Ghani hinted that the administration knew even then that they were in dire straits.

Biden allegedly asked the nation’s leader to “project a different picture” and downplay the severity of the situation — a fact that Mast wanted Blinken to answer for if the fudged intelligence led to the poor decisions that botched the operation.

“Mr. Secretary, as the leaked transcript as you referred to it says, did President Biden work with the coward exiled president of Afghanistan to manipulate the intelligence about the Taliban?” the Florida Republican asked right out of the gate.

Blinken reiterated the official narrative that Biden and his Afghan counterpart thought “the issue was not whether Afghanistan had the capacity to withstand the Taliban, it’s whether it had the will and the plan to do so.”

Mast pressed him on this line, asking whether Blinken were saying that the transcript “is a lie, it’s false, it’s incorrect, he did not work to tamp down the intelligence on the Taliban?”

Do you think Blinken should take the blame for the Afghanistan debacle?

As Blinken doubled down, Mast was incredulous, asserting that “everybody looking for an explanation about what happened and how everybody got it so wrong, how your administration got it so wrong needs to look at that as the most likely explanation, asking the president to manipulate the intelligence of what was actually going on with the Taliban.”

Then Mast, who lost both of his legs while on a tour of duty in Afghanistan, held up photos of each of the 13 service members killed in action on Aug. 26, naming each of them and telling Blinken their families “deserve to know” what happened.

After making it through each of the deceased men and women, Mast focused his ire back on Blinken.

“I do not believe whatsoever what you’re saying about the administration not working to manipulate that intelligence,” Mast concluded. “To me, that is the most logical explanation of how so many in the intelligence community got this so wrong about what was going to happen in Afghanistan.”

As Blinken began to answer, calling Mast “dead wrong,” the Republican lashed out at him again.

The two men continued talking over each other with Mast repeating that he didn’t want to listen to Blinken’s “lies” as the committee chair, Democratic Rep. Gregory Meeks of New York, banged his gavel several times to get Mast to stop speaking.

Other Republicans similarly blasted Blinken, with Tennessee Rep. Tim Burchett saying there was “blood on [his] hands” while South Carolina Rep. Joe Wilson demanded Blinken’s resignation, according to NBC News.

Blinken argued the drawdown had to proceed because of former President Donald Trump. (Whenever Democrats are cornered, they blame Orange Man.)

“Had he not followed through on his predecessor’s commitment, attacks on our forces and those of our allies would have resumed and the Taliban’s nationwide assault on Afghanistan’s major cities would have commenced,” Blinken said.

Regardless of the reasons to proceed with a plan that was clearly doomed from the start, it’s undeniable that the withdrawal from Afghanistan has been an awful mess from start to finish, and the American people deserve answers as the disaster continues to unfold.

Of course, the Biden administration has no intention of taking the blame but Republicans are not going to let up.

Someone needs to answer for the 13 dead service members who lost their lives in a terrorist attack that likely wouldn’t have happened had the military stayed put.

One decision after the next — announcing a withdrawal date and then agreeing to leave even earlier, trusting the Taliban, abandoning post before evacuating civilians — has caused unnecessary bloodshed and made America less safe.

It’s time the administration was held accountable for these decisions, whether they were the product of incompetence or faulty information — or whether it was because Biden was manipulating intelligence and officials like Blinken looked the other way.