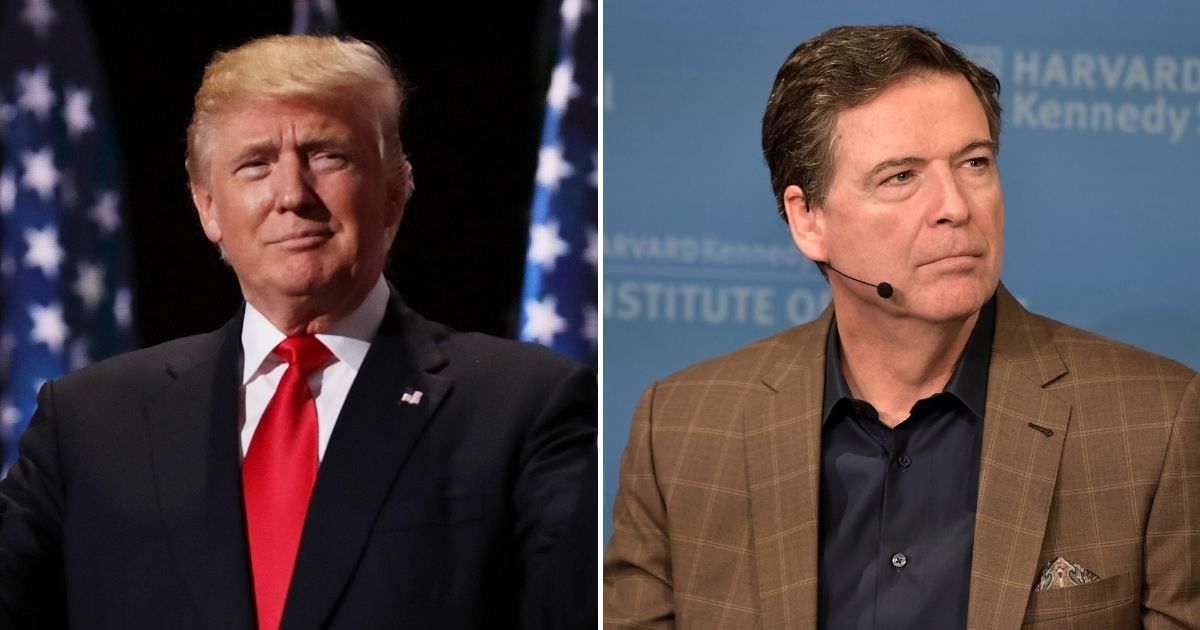 Trump made the assertion while appearing as a guest on the Fox News program “Life, Liberty & Levin,” which aired Sunday night.

The 45th president was on the show to talk about his new photo book “Our Journey Together.”

“Don’t forget, I fired Comey. Had I not fired Comey, you might not be talking to me right now about a beautiful book about four years in the White House, and we’ll see about the future,” Trump said.

Trump: Don’t forget, I fired Comey. Had I not fired Comey, you might not be talking to me right now about a beautiful book about four years in the White House and we’ll see about the future. pic.twitter.com/5hL9RfFaA6

Trump reiterated later in the interview, “If I didn’t fire Comey, they were looking to take down the president of the United States.”

“Some people said, ‘He made a mistake when he fired Comey.’ And now those same people said it was the most incredible, instinctual moves that they’ve ever seen,'” Trump continued.

“I don’t think I could’ve survived if I didn’t fire him, because it was like a hornets’ nest. When I fired him, they all went crazy against each other.”

Trump: If I didn’t fire Comey, they were looking to take down the President of the United States… I don’t think could’ve survived if I didn’t fire him pic.twitter.com/AHxYyPBZA6

A little over a week after Trump dismissed Comey in May 2017, Deputy Attorney General Rod Rosenstein appointed special counsel Robert Mueller to take over the FBI’s Russia investigation.

A few months earlier, in January 2017, Comey had briefed then President-elect Trump about the infamous dossier compiled by former British intelligence agent Christopher Steele, which helped fuel the Russia probe.

CNN reported at the time the document contained allegations that the Russian government had compromising personal and financial information about Trump.

Special Counsel John Durham, who is investigating the origins of the Russia investigation, has indicted three people so far.

In September, Durham indicted attorney Michael Sussman for allegedly making false statements to the FBI. Sussman was a partner at Perkins Coie during the 2016 presidential race but resigned in September after the DOJ’s indictment.

Last month, the special counsel charged Igor Danchenko with five counts of making false statements to the FBI regarding information he compiled and gave to Steele, who used it in writing the dossier.

Danchenko is a Russian national who worked at the liberal Brookings Institute in D.C.

During his Levin interview Sunday, Trump described Steele as a “nut job,” who passed along a “totally fabricated” story to the FBI.

The former president also offered a stern critique of the late Sen. John McCain of Arizona in giving credibility to the unsubstantiated dossier by delivering it to Comey.

“He sent a copy to the FBI,” Trump said. “Great Republican he was, right? ‘Let’s take down the Republican president.'”

“He sent a copy of a fake report. If you did a movie, nobody would believe it,” Trump added.

The Arizona Republic reported in March 2019 that court documents offered details into McCain’s role, which Trump highlighted in a tweet.

“So it was indeed (just proven in court papers) ‘last in his class’ (Annapolis) John McCain that sent the Fake Dossier to the FBI and Media hoping to have it printed BEFORE the Election,” Trump wrote at the time, according to the news outlet. “He & the Dems, working together, failed (as usual). Even the Fake News refused this garbage!”

McCain defended his actions in his 2018 memoir, “The Restless Wave” co-authored by Mark Salter, saying he had an “obligation to bring to the attention of appropriate officials unproven accusations I could not assess myself.”

“I discharged that obligation, and I would do it again,” McCain further stated. “Anyone who doesn’t like it can go to hell.”

In a Fox News interview last month, Trump stated that Durham is laying the “early building blocks” of his investigation.

“We all sort of knew that happened,” he said, “and now we have facts, and I think they’re only going to get deeper and deeper — and it all leads back to the Democrats, Hillary [Clinton] and the dirty lawyers.”