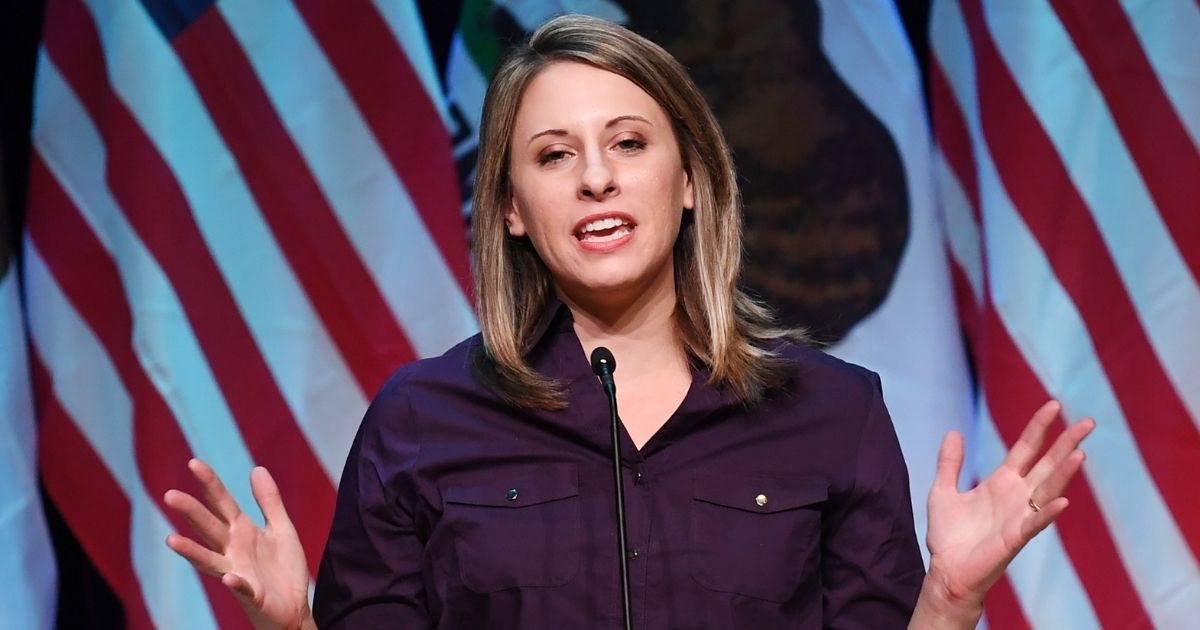 Former Democratic Rep. Katie Hill gained quite a lot of notoriety for herself during her short time in office after it was revealed that she not only had a polyamorous “throuple” with a young staffer and her now-ex-husband, but was sleeping with another staffer once that ill-fated affair turned sour.

Well, it turns out that as the sex scandal broke, she was sleeping with a reporter who was covering the scandal in Hill’s favor.

For those of you keeping track at home, that’s three entirely separate people with whom Hill was engaged in unethical sexual relations.

That’s a lot of shady hanky panky for one congresswoman.

The U.K.’s Daily Mail published a story that pointed out Hill told Vanity Fair as part of a glowing piece on her “next chapter” that she is expecting a baby with partner Alex Thomas.

The story included several glamour shots of the 21-week-pregnant Hill and a shirtless Thomas, whom she described as a “rebound” after her marriage soured, and her “rock” throughout the scandal.

Of course, as he was supporting her through the trying time when she was exposed for having both unconventional and unethical sexual affairs, Thomas was reportedly covering the story and hotly defending Hill without ever revealing that he was her latest bedfellow.

This was a relationship, by the way, that Vanity Fair noted began just weeks after she separated from her now-ex-husband Kenneth Heslep, with whom she had engaged in the “throuple” involving a 22-year-old campaign staffer.

Although it was the nude photos of Hill with Morgan Desjardins that were widely circulated in October of 2019, her ultimate resignation from Congress came after an ethics probe was launched into her second alleged affair with a male staffer to her congressional office, so there’s a lot of potential overlap here as far as whom she was sleeping with and when, it’s worth noting.

Have you lost trust in the establishment media?

Hill told Vanity Fair that she and Thomas met at a congressional softball game in 2019, and that they later took a vacation together in August of that year, according to New York Magazine.

Then, in October when the sex scandal began to surface, Thomas covered the story for Playboy with no apparent disclosure as to the nature of his relationship with Hill.

Hill would go on to sue the British tabloid as well as other journalists, who were provided with nude photos of Hill by her then-estranged husband, but a California judge determined that, as she was an elected official, it was in the public’s interest to know about her affairs and that the reporting had been covered by the First Amendment.

She has been ordered to pay $400,000 as a result, which has nearly bankrupted her, as she told Vanity Fair.

Hat Tip: Hunter Biden's Art Dealer Could Be Cozier with the First Family Than Anyone Thought

It seems not only did Thomas cover his girlfriend’s sex scandal as though he were a totally unconnected, objective reporter, going as far as to reach out to Red State telling the outlet he was “looking to” cover the story himself, but he also erroneously reported about the source of the story.

At the time, Thomas falsely claimed that the National Republican Congressional Committee (NRCC) was “shopping around” the images of Hill before the story initially broke.

“SOME NRCCxKATIE HILL S**T IS GONNA HIT THE FAN IN THE NEWSLETTER THIS WEEK, BOYS. SUBSCRIBE,” he wrote in a since-deleted tweet directing followers to his newsletter, which he made clear was not associated with his Playboy work.

After the organization denied Thomas’ claims, however, the Mail reported he was forced to concede that the NRCC “might have never had their hands on the photos.”

In March of 2020, The Washington Free Beacon reached out to Thomas to ask about his relationship with Hill, but he did not respond. He and Hill had been seen attending a book party in Manhattan together the month before, but at the time, Thomas denied any personal relationship with his now-baby mama.

“It’s baffling that someone who has sex with the subject of his glowing puff piece articles making now-retracted accusations against our organization is a credentialed member of the press,” a spokesman from the NRCC told the Free Beacon at the time.

What’s significantly less baffling is why a growing number of Americans have a very difficult time believing what they read in the mainstream media, all things considered.

Hill was literally in bed with several people at one point or another, which might have been her own private business if it didn’t involve her campaign and congressional staffers, but based on her own account, she was also both literally and figuratively in bed with a reporter at the time.

It’s hard to say which is the bigger breach of public trust — but of course, to hear Hill tell it to Vanity Fair, she’s the ultimate victim here, naturally.

Of course, there’s nothing to say that Hill and Thomas can’t move on with their lives and try to make something of their relationship and their new journey together as parents.

However, no matter how much skin they show in Vanity Fair (did the world really need to see more scantily clad Katie Hill?) or how sympathetic the magazine portrays them to be, the complete and utter lack of mea culpa for the layers of wanton ethics are sickening.

This is exactly the kind of garbage that Americans are getting completely sick of, made all the worse by the fact that the media is continuing to treat Hill as though she did nothing wrong and was the innocent victim of cruel, patriarchal Republicans, or something.

It is the American public that has been victimized by a cultural climate that has such twisted moral standards that Thomas didn’t think twice before diving into covering his girlfriend’s sex scandal as though he was an impartial reporter with no expectation of recourse — and has still apparently experienced absolutely no accountability for his unthinkably bad behavior.

This is the glorious “free press” we’re supposed to trust to tell us the truth about establishment Washington, D.C.?