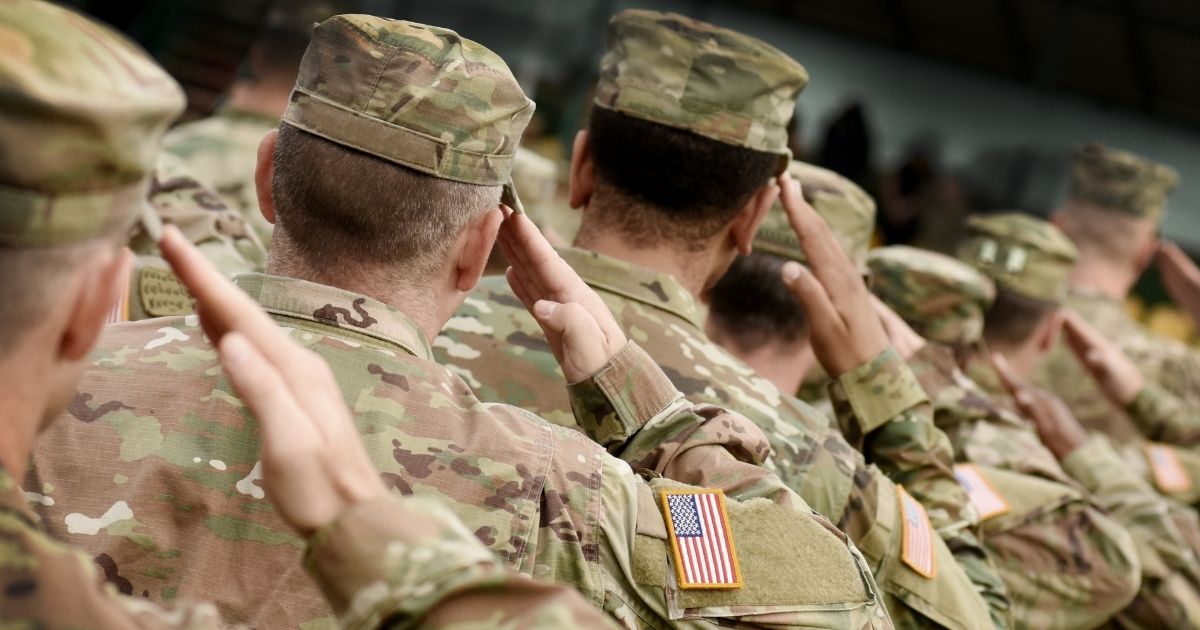 Many of us are sick of the tyrant in the White House, but how many would have the courage to give up a prestigious career and comfortable retirement because of it?

Lt. Col. Paul Douglas Hague did just that, proving once again that those who serve in the military are the bravest among us.

He resigned from the Army — forfeiting his pension by cutting short a 19-year career — in protest of the Pentagon’s sweeping vaccine mandate and the “Marxist takeover” of the military.

Hague’s resignation garnered attention after his wife tweeted images of the letter he sent to his superiors.

After eighteen years of active duty service in the US Army, my lieutenant colonel husband has resigned

He’s walking away from his retirement

The memo is dated Aug. 23 — the day the Pentagon announced that all service members would be required to get the shot — but Hague told Fox News her husband sent it a week later.

Should service members be required to get the COVID-19 vaccine?

Hague said there were several reasons for her husband’s departure. “He didn’t resign over a vaccine,” she said in response to social media users who asked why he didn’t protest the other vaccines required to serve in the military.

“He said he felt the vaccine was being used as a political tool to divide and segregate Americans. He then went on to list many other reasons for his resignation — none of which have anything to do with vaccines,” she said.

Hague’s letter indeed lists several reasons for his resignation, though he led with his objections to the COVID-19 vaccine mandate.

“First, and foremost, I am incapable of subjecting myself to the unlawful, unethical, immoral and tyrannical order to sit still and allow a serum to be injected into my flesh against my will and better judgment,” Hague, who is based in Fort Bragg, South Carolina, wrote.

“It is impossible for this so-called ‘vaccine’ to have been studied adequately to determine the long term effects,” he added. “It simply has not existed for enough time and any claim otherwise is blatantly ignorant and likely an outright lie driven by negligent political agenda.”

While the COVID-19 vaccines have officially been deemed safe and effective, it’s undeniable that they are too new for long-term studies and have been used as a political football.

Hague went on to explain that he would not contribute to the “fall of this great nation and its people — those very Americans whom I swore to protect the liberty of at all cost” he said.

“We are being used as tools to boost the numbers of vaccinated people in order to further distance and alienate those who, knowing the personal risk of the disease, have freely decided to remain unvaccinated,” Hague charged.

Beyond the vaccine mandate, Hague said he cannot serve any longer due to his “complete lack of confidence in the presidential administration and secretaries directing the military — as demonstrated by the sudden and rash, at best, but pushing traitorous withdrawal from Afghanistan.”

Hague also cited an “ideologically Marxist takeover of the military and United States government at their upper echelons,” knowing that he was walking away from the Army just shy of earning his pension but confident that he would ultimately be upholding his oath.

Since the military is now “neither serving this great nation, nor upholding the constitution,” he said it was his wish as a civilian to “join those who have served before my in pledging my Life, my Fortune, and my Sacred Honor to continue resisting the eternal and ever-mutable forms of oppression and tyranny — both from enemies outside our nation’s borders, and those within.”

If a man like Hague — who dreamed of serving in the military and who had nearly earned his pension — can simply walk away, it’s time to take notice of the state of our armed forces.

As the U.S. military becomes more woke and less war-ready, the men and women in uniform have to follow orders from leaders more interested in turning them into social justice warriors than, well, actual warriors.

Today’s military bigwigs give veterans who lost limbs in service to their country a backseat to those who mutilate themselves for the sake of their gender delusions.

If that wasn’t discouraging enough, service members had to stand by and watch as Afghanistan was effectively surrendered to the Taliban because President Joe Biden cared more about claiming credit for ending the war than he ever did about the actual mission.

On top of all that, they’re being forced to submit to vaccinations that have been blatantly exploited to divide Americans.

Servicemen and women uphold their duty to the president regardless of political affiliation or personal affinity. However, Hague’s resignation shows that even those who bleed red, white and blue can only take so much of the military’s hard push to the left and over the rainbow.

Biden could have a dangerous situation on his hands if more service members take a stand against vaccine mandates and the woke takeover.

If patriots like Hague decide to quit en masse, it’s possible the only ones left to defend the country will be pregnant airwomen and post-op gender-confused soldiers — and nothing would please our enemies more.

The Western Journal has published this article in the interest of shedding light on stories about the COVID-19 vaccine that go largely unreported by the establishment media. In the same spirit, according to the most recent statistics from the CDC’s Vaccine Adverse Effect Reporting System, 7,653 deaths have been reported among those who received a vaccine, or 20 out of every 1,000,000. By contrast, 652,480 deaths from COVID-19 have been reported by the CDC, or 16,101 out of every 1,000,000. In addition, it must be noted that VAERS reports can be filed by anyone and are unverified by the CDC. Thus, as the agency notes, “reports of adverse events to VAERS following vaccination, including deaths, do not necessarily mean that a vaccine caused a health problem.” The decision to receive a COVID-19 vaccine is a personal one, and it is important to consider context when making that decision. — Ed. note

Interview with an American Exorcist — Join Me with Monsignor Stephen Rossetti