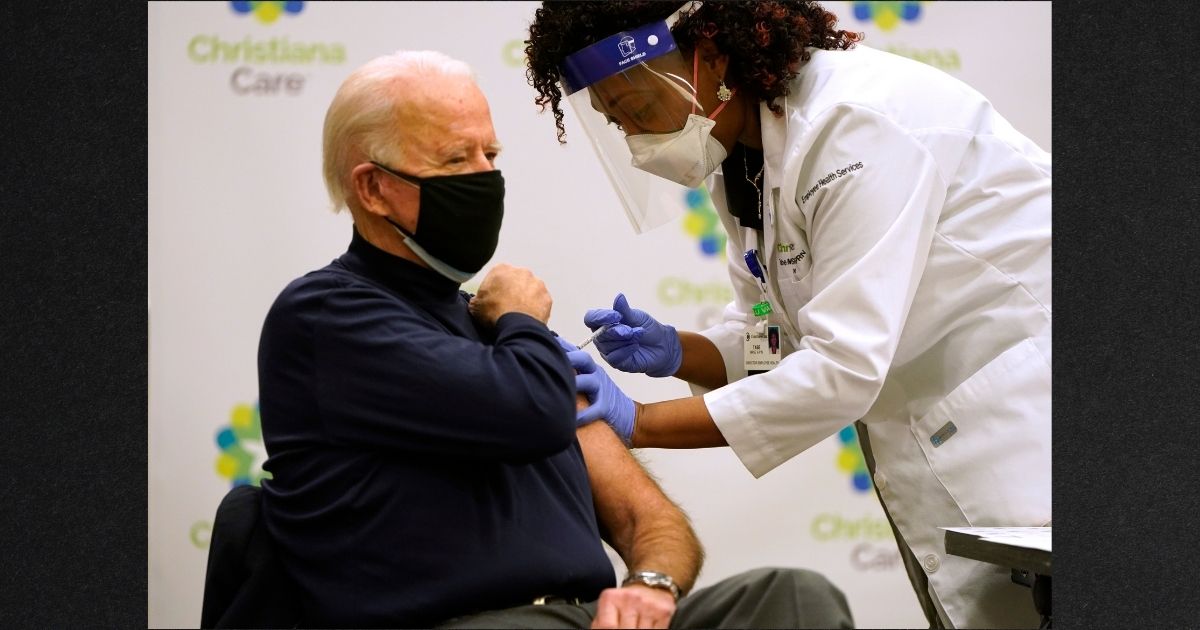 President Joe Biden’s latest attempt to rewrite the history of the Trump administration‘s response to COVID-19 crashed and burned Friday.

In praising Biden, the official White House Twitter account insisted that when he was sworn in, “there was no vaccine available.”

When President Biden took office, millions were unemployed and there was no vaccine available.

In the last 15 months, the economy has created 8.3M jobs and the unemployment rate stands at 3.6% — the fastest decline in unemployment to start a President’s term ever recorded.

As noted by media fact-checkers, including fact-checker Glenn Kessler of The Washington Post, that would have meant that Biden, who received his first dose of the vaccine before taking office, would not have done so.

Anybody got the customer service line for the new disinformation board? https://t.co/z8fmO8dH4s

“There was no vaccine available” is very clearly false. More than 3 million Americans were fully vaccinated and more than 18 million had at least one dose by Biden’s Inauguration Day. Biden himself was fully vaccinated.

Who’s manning the @WhiteHouse Twitter account? Delete this false tweet. Biden himself has said 8% of seniors had gotten the vaccine on the day he took office. Biden was one of them. —> https://t.co/ojDmn1DNIQ https://t.co/V7z07DHQ90

Former President Donald Trump launched what he dubbed Operation Warp Speed in the early days of the pandemic to develop vaccines faster than anyone at the time thought possible.

As noted by the Wall Street Journal this year, “The Trump administration’s Operation Warp Speed delivered three Covid-19 vaccines in record time. Yet liberals are giving the program its due only now, amid President Biden’s Covid-19 stumbles.”

ABC had noted in May of 2021 that “Biden leans heavily on Trump’s ‘Warp Speed’ but won’t give credit,”

With a mountain of facts staring it in the face, even CNN had to call theWhite House’s Friday tweet fiction.

“It’s just not true that ‘there was no vaccine available,’ at the time Biden took office,” CNN wrote. “About 3.5 million people were fully vaccinated against Covid-19 and about 19 million people had received at least one vaccine dose as of Biden’s inauguration day on January 20, 2021, according to statistics published by the US Centers for Disease Control and Prevention.”

CNN said that as former President Donald Trump was leaving office, “The US was already administering an average of more than 1 million doses a day at the time.”

Paul Mango, former deputy chief of staff for policy at Health and Human Services, said the Trump administration created the playbook for the nation’s response.

“To say that there was no plan — it’s just completely disingenuous,” said Mango.

CNN noted that Biden’s grandiose claim of lowering unemployment was neither entirely false nor complete.

“And though the tweet said that ‘when President Biden took office, millions were unemployed,’ there are still millions of people unemployed today despite the improved jobs situation. There were about 5.9 million unemployed people in April 2022, according to the US Bureau of Labor Statistics,” CNN wrote.