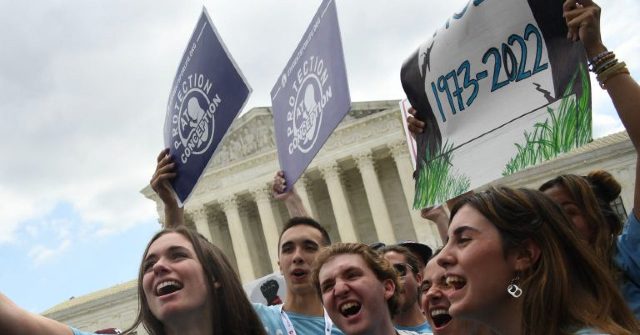 Rasmussen Reports found that 50 percent of voters agree with the Supreme Court’s decision to overturn the moral and legal atrocity that was Roe v. Wade, while only 45 percent disagree.

So, yes  — surprise, surprise — once again the media are lying to you about public opinion.  This was already pretty obvious over the weekend when the multitudes did *not* take it to streets, only the mentally ill did.

Additionally, unlike the garbage being released by the corporate media, this is a trustworthy poll.

To begin with, unlike media polls, Rasmussen has an excellent track record. But in this case, there’s an even bigger reason, and that’s the way Rasmussen worded the question…

“The Supreme Court recently overturned the 1973 Roe v. Wade decision, so that each state can now determine its own laws regarding abortion. Do you approve or disapprove of the court overturning Roe v. Wade?”

That is the only correct and accurate way to poll on this issue.

The fake media would have the public believe that abortion is now outlawed across the fruited plains.

What happened last week was the most lower-case “D” democratic thing imaginable. Instead of nine unelected judges deciding a social issue by judicial fiat, the decision is now left to We the People through our elected representatives. That’s how it should be. That’s how it always should have been. In fact, we were the only country in the world that said abortion was a constitutional right. Every other country used democracy to decide its abortion laws, which is why most civilized nations have restrictions on abortion after 12 or 20 weeks.

Once people understand that abortion has not been outlawed (although it should be) and that it is now up to the states, they side with democracy.

For those who will argue this poll is skewed, get this: fifty-two percent of those polled said they are “pro-choice,” while only 41 percent said “pro-life.”

Put another way, Rasmussen found a sample of the country that reflects what we’ve seen in other polls on the pro-choice/pro-life question, then asked about the Supreme Court decision in an honest way— and lo and behold, look at the result.

You see, the corporate media used fake polls as one of their dishonest methods to keep Roe v. Wade in place. The media then used those polls to say Roe was not only wildly popular, but that overturning it would cause a second Civil War. At best, it would destroy the Republican party, they said.

Well, the court is no longer fooled by these tired and transparent media tactics, nor are Republicans like Donald Trump.

The internal numbers on this Rasmussen poll are revealing… Forty-one percent of black voters approve of overturning Roe, while only 55 percent disapprove. Shockingly, even 25 percent of Democrats approve. Independents, however, are opposed 58 to 35 percent.

Rasmussen also polled on how abortion compares to other issues like inflation, gas prices, and the coming recession. Seventy-seven percent of Independents say it’s important.

The question is how that number lines up with other issues. Well, here you go….

Coming Up Today:@JoeBiden daily presidential job approval % is – down.

With 75% Concerned, 54% Very Concerned, Abortion Rights will move up into the #6 position in the upper All U.S. Likely Voters section of our list. pic.twitter.com/yMfizyvF2s

So not too high…

Keep in mind that as the days and weeks pass, the passion around the abortion issue will diminish. What will not diminish are Biden’s gas prices, his inflation, his struggling economy, violent crime, his open border, and Trans Nazis aggressively using public schools to target small children for sexual abuse.