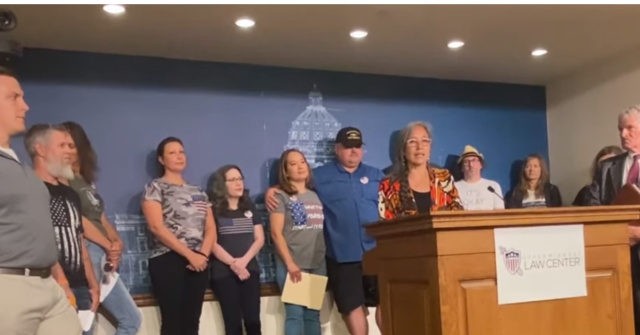 Minnesota citizens are making the claim Critical Race Theory (CRT) is overwhelming their workplaces and schools as three new legal actions are filed – one lawsuit and two formal complaints that might become lawsuits – arguing the Marxist ideology promotes racism and divisiveness.

During a press conference Monday (video below) at the Minnesota Capitol, Doug Seaton, president of the Upper Midwest Law Center, who is representing the plaintiffs in all three matters, said:

We’re seeing that everywhere these days … favoritism and disadvantages based on race and skin color, as you will see in our clients’ presentation. The CRT push is subverting the missions of all of their organizations. They are in educational organizations, health care and treatment organizations, and counseling and care organizations, and these are all being subverted by the propaganda of CRT.

“They’re all linked and this involves propaganda at the Lakeville schools, at the Hennepin Healthcare System, known as HCMC in the past, and at Minnesota DHS [Department of Human Services],” he said, adding:

It’s our clients’ position that the organizations and shared ideology of Black Lives Matter, CRT and the “1619 Project” are opposed, not part of, the Civil Rights movement. The historic Civil Rights movement has focused on equal treatment under law for all advancing people based on their merit and on the content of their character, as Martin Luther King famously put it, not the color of their skin. But, CRT, et al, believes and promotes the opposite. Racial division, hostility to free speech, the rule of law, free institutions, and equal civil rights for all – they are opposed to these things. This is no surprise to those of us who have studied these organizations and their Marxist and anti-American origin … they encourage racial hostility, re-segregation.

In the case filed in U.S. District Court in the District of Minnesota, Lakeville taxpayers Bob and Cynthia Cajune, and Kalynn Wendt, whose young daughter Novalee spoke at school board meetings that were recorded and went viral, argue the school district’s “Inclusive Poster Series” included displays with the Black Lives Matter slogan.

The caption under the BLM posters read:

At Lakeville Area Schools, we believe Black Lives Matter and stand with the social justice movement this statement represents. This poster is aligned to School Board policy and an unwavering commitment to our Black students, staff and community members.

District taxpayers like the Cajunes reportedly asked for alternative ideological viewpoints to be presented alongside the posters. They were told that the district “does not approve of All Lives Matter or Blue Lives Matter posters in the classrooms or other areas of the school, and teachers/school staff are not allowed to wear shirts with these sayings to school.”

Seaton asserted the district’s response has created a “hostile education environment,” one that amounts to “viewpoint discrimination.”

The parties in the other two matters must first present their claims to the U.S. Equal Employment Opportunity Commission (EEOC) prior to proceeding with a lawsuit.

In one case, Dr. Tara Gustilo, who was chair of OB/GYN services at Hennepin Healthcare System, was “demoted essentially because of her polite opposition to the Critical Race Theory that’s saturating her organization,” Seaton said.

“I see a racist and divisive ideology of race essentialism taking over our nation and my institution,” Gustilo said during the press conference. “Further, there seems to be this growing intolerance for people with different opinions or ideas and it seems that this tribalistic ideology is fostering that kind of intolerance.”

Gustilo argues a program she helped to launch that focused on understanding various traditions and cultures of the local community “began to morph into racially segregated care.”

“I noticed that members of the department instead began to transform the program from one that simply sought to respect and appreciate the various cultures to one of segregated care based on race,” she claims.

In the other EEOC complaint, Joe Norgren, employed for 27 years at the Minnesota Security Hospital, claims he was forced to retire early due to hostility he experienced related to his “refusal to subscribe to CRT and abandon [his] religious beliefs.”

Norgren, a Native American, said he had been required to participate in trainings titled “How to be Anti-Racist” and “Understanding Gender Identity and Expression.”

He participated in the first training, which he said taught that America is the “source” of “racist ideas.” When he asked for a religious exemption to the second training, his request was denied.

“While I felt uncomfortable answering, because he was my supervisor and I was on shift, I responded that I believed there were only two genders and two sexes, based on everything I read and researched on DNA and biology,” Norgren writes in his complaint. “As we continued to discuss and disagree on this topic, he told me I could be fired for the way I think or talk.”

The case is Cajune v. Independent School District 194, and has not yet been assigned a docket number in U.S. District Court for the District of Minnesota.