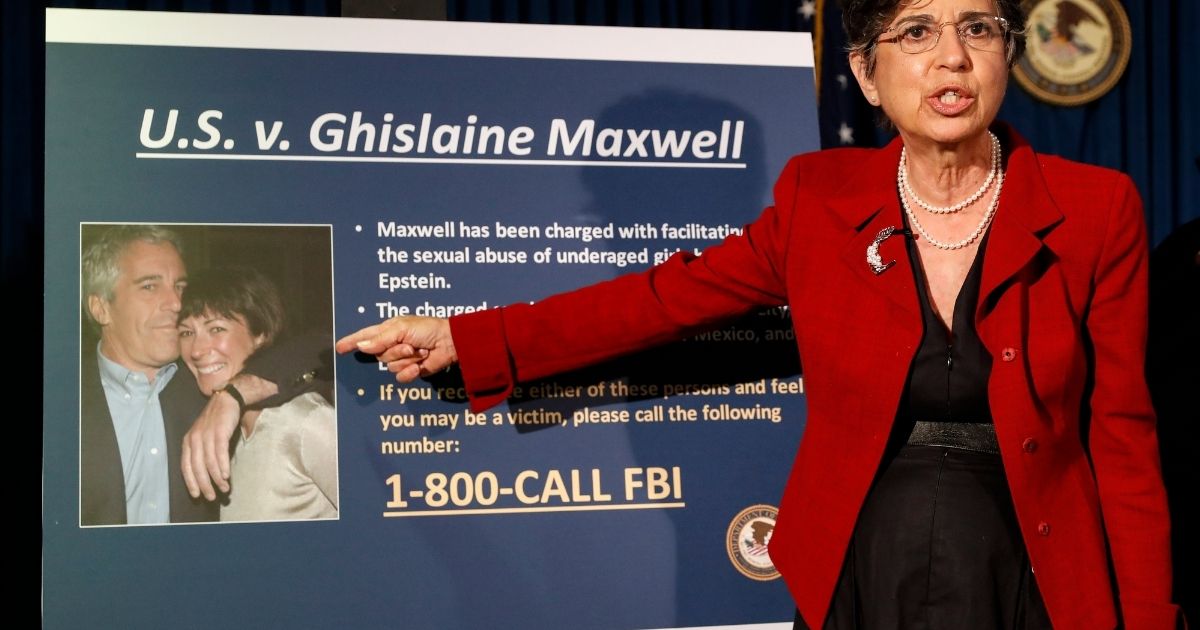 Convicted pedophile Jeffrey Epstein lived large in a sprawling mansion in Palm Beach, Florida, which he plastered with nude pictures of young women and girls, according to FBI photos entered into evidence in the sex-trafficking lawsuit against his former girlfriend, Ghislaine Maxwell.

Prosecutors submitted dozens of never-before-seen photos that paint a damning portrait of one of Epstein’s numerous properties where he allegedly sexually abused women, including underage girls, the Daily Mail reported Monday.

British socialite Maxwell, the daughter of notorious left-wing conman Robert Maxwell, is accused of procuring young girls — some as young as 14 — for Epstein and his celebrity friends between 1994 and 2004, essentially acting as a pimp for Epstein’s sex trafficking.

At his New York City townhouse, Epstein had a freaky portrait of a smiling Bill Clinton wearing a blue dress hanging on the wall. The dress looked exactly like the blue dress that Hillary famously wore to the 2009 Kennedy Center Honors.

EXCLUSIVE: Why Did Jeffrey Epstein have a painting of Bill Clinton wearing a blue DRESS and red heels inside his mansion? https://t.co/MaUAQ5xo97 pic.twitter.com/OWq9qvuKER

Epstein allegedly committed suicide in August 2019 while in federal custody.

His curious death — which occurred while he was under heavy security to prevent suicide — has spawned conspiracy theories that he was murdered to prevent him from testifying against his rich and powerful celebrity clientele.

Among the photos entered into evidence in Maxwell‘s trial this week were those of Epstein’s bedroom and bathroom, as well as the massage table where he allegedly coerced young women into giving him sexual massages.

Epstein’s Palm Beach house manager, Juan Alessi, testified last week that Maxwell scheduled these massages three times a day for Epstein, mainly in his oversized bathroom, according to the Mail.

Numerous naked drawings of women were displayed on the walls of Epstein’s seedy mansion. One of the pictures was a drawing of Maxwell, who was known as the “lady of the house,” Alessi said.

Maxwell dated Epstein in the 1990s and remained a close friend until his death.

She was Jeffrery Epstein’s pimp, groomer, fixer, confidante, and enforcer for two decades.

All the photos submitted into evidence this week were taken during a 2005 FBI raid on Epstein’s Palm Beach mansion, according to the Mail. It’s unclear why the pictures were suppressed from the public until now.

Do you think Maxwell will be convicted?

Several photos showed Epstein and Maxwell’s home offices and their desks, where copies of a strict 58-page household manual were kept.

The manual also ordered household staffers that “Unless otherwise instructed, NEVER disclose Mr Epstein’s or Ms Maxwell’s activities or whereabouts to anyone.”

He told court “there were many photographs” of naked women in the Palm Beach mansion “usually kept at Ms Maxwell’s desk”.#Maxwell #Epstein

Alessi worked for Epstein at his Palm Beach mansion from 1990 to 2002, the Independent reported.

Alessi testified that in 1994, he picked up a young girl from school and brought her to Epstein. He said Maxwell ordered him to frequently drive the girl to Epstein’s home. He testified that the girl was “14 or 15” and “strikingly beautiful.”

The girl, who’s known as “Jane,” has since testified that Epstein sexually abused her for years, according to the Independent. “Jane” said Maxwell was sometimes in the same room when this abuse occurred.

We’re only at the beginning of Maxwell’s sex-trafficking trial. You can be sure more damning evidence will come to light over the coming weeks.