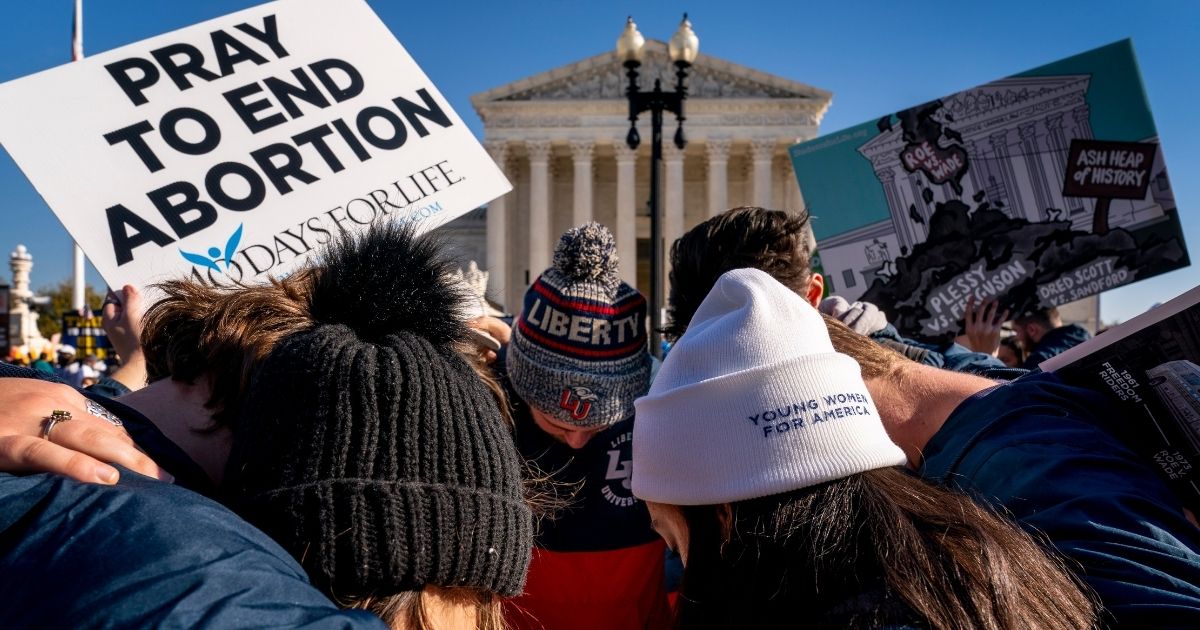 On Tuesday, the Supreme Court heard oral arguments in the case of Dobbs v. Jackson Women’s Health Organization, which centers around Mississippi’s ban on most abortions after the fifteenth week of pregnancy.

With a conservative majority in the Court, the right’s pipe dream of overturning Roe v. Wade, or at least rolling back abortion rights, appears to be within reach. Naturally, this development has escalated the public debate over what is, arguably, the most divisive issue of our time.

An op-ed in The New York Times written by Elizabeth Spiers, a Democratic digital strategist who was adopted as an infant, argues that adoption is “infinitely more difficult, expensive, dangerous and potentially traumatic than terminating a pregnancy during its early stages.”

She criticizes Justice Amy Coney Barrett for suggesting that “adoption is some kind of idyllic fairy tale.” Spiers writes, “My own adoption actually was what many would consider idyllic. I was raised by two adoptive parents, Alice and Terry, from the time I was an infant, and grew up in a home where I knew every day that I was loved. A few years ago, I found my biological mother, Maria, and three siblings I didn’t know I had via a DNA test and Facebook.”

“The first time I spoke to Maria on the phone — she lives in Alabama, not too far from my parents, and I live in Brooklyn — she apologized repeatedly for giving me up and told me she loved me and that I would always be family. ‘You are blood,’ she would say later. I told her, and continue to tell her, every time she brings it up, that the apology is unnecessary. I had a wonderful childhood and I believe she had made the right decision. But she remains heartbroken about the years we missed together.”

Spiers “resent[s] being used as a political football by the right. I believe that abortion is a form of health care and that every woman should have access to it if she needs it … I resent it on behalf of Maria, who found the choice she made traumatizing and still feels that pain, 44 years later.”

Does Spiers think Maria would be less traumatized if she had aborted her?

Maria had several children already and felt it would be too difficult financially and perhaps emotionally to raise another child, so she delivered Spiers and turned her over to parents who could (and did) offer her a childhood of abundance and attention.

Does Spiers op-ed convince you that having an abortion is easier than suffering through the trauma associated with adoption?

I would argue that Maria’s heartbreak would be greater if she’d opted to abort Spiers.

I know several women who had abortions with men they later married and raised families with. Each has told me they often think about the child who would have been their first born.

Spiers continues: “While pregnant, they will undergo the bonding with a child that happens by biological design as an embryo develops into a living, breathing, conscious human. And then that child will be taken away.”

“The right likes to suggest that abortion is a traumatic experience for women — a last resort, a painful memory. But adoption is often just as traumatic as the right thinks abortion is, if not more so, as a woman has to relinquish not a lump of cells but a fully formed baby she has lived with for nine months. I’m a mother myself … As anyone who has gestated a human will tell you, there is a vast difference between the fourth week of pregnancy and the 40th.”

I have three children. Rather than viewing them as “a lump of cells” in the early months of pregnancy, I was awestruck by the knowledge that a new life was growing within me. And that was long before I felt the first little flutters of movement, the point at which Spiers believes “a kind of biological brainwashing” begins which “happens whether you want to be a parent or not.”

FYI, Ms. Spiers, most women would call it bonding or even love, rather than “a kind of biological brainwashing.”

“She [Justice Coney Barrett] blithely seems to assume that a mother can simply choose not to bond with the child she’s gestating solely on the basis that she is not ready to be a mother or believes that she is unable to provide for the child,” Spiers continues.

The mother/child bond is real, and I would argue it starts long before quickening begins. Is it really easier to end that life than to deliver the child and give them to parents who yearn for a child and have the financial means to provide for them?

“The trauma doesn’t just affect mothers, either,” she writes. “Researchers have a term for what children who are adopted, even as infants, may suffer from later in life: relinquishment trauma. The premise is that babies bond with their mothers in utero and become familiar with their behaviors. When their first caretaker is not the biological mother, they register the difference, and the stress of it has lasting effects.”

Ms. Spiers, we all experience some form of trauma in this life. Truth be told, many who have been raised by their biological parents have experienced trauma and would have been far better off being raised by adoptive parents who truly welcomed parenthood and loved them.

During his 1992 presidential campaign, former President Bill Clinton said, “Abortion should be safe, legal and rare.” While the number of abortions in the U.S. has declined since that time, Democrats have pushed for unlimited access to abortions, with state lawmakers in New York and Virginia fighting for late term, partial-birth and even taxpayer funded abortion.

Then-New York Gov. Andrew Cuomo was so delighted after his state’s passage of the Reproductive Health Act in Jan. 2019, which expands abortion rights, that he ordered the One World Trade Center building, two major bridges in the state and the Alfred E. Smith Building in Albany, to be lit up with pink lights, according to The Washington Times.

Yes, they were celebrating a new law which eliminated “most of the state’s previous restrictions on abortions after 24 weeks,” legalizing the most heinous and cruel procedures conceivable to kill babies.

Ms. Spiers should consider the trauma experienced by the victims of these procedures. And perhaps the trauma of the mother after the reality of what she just allowed a doctor to do to her child sinks in.

Sorry Ms. Spiers, the argument that killing a child in the womb (or even out of the womb as some states now allow), simply because life is difficult and potentially full of suffering, is sheer madness.

This article from Elizabeth Spiers in the NYT is true, bats*** lunacy. Let us examine the ways. https://t.co/QeEgrAV69Q

Elizabeth is a contract writer at The Western Journal. Her articles have appeared on many conservative websites including RedState, Newsmax, The Federalist, Bongino.com, HotAir, Australian National Review, Independent Journal Review, Instapundit, MSN and RealClearPolitics.
Please follow Elizabeth on Twitter.

Elizabeth is a contract writer at The Western Journal. Her articles have appeared on many conservative websites including RedState, Newsmax, The Federalist, Bongino.com, Australian National Review, HotAir, Independent Journal Review, Instapundit, MSN and RealClearPolitics.
Please follow Elizabeth on Twitter.