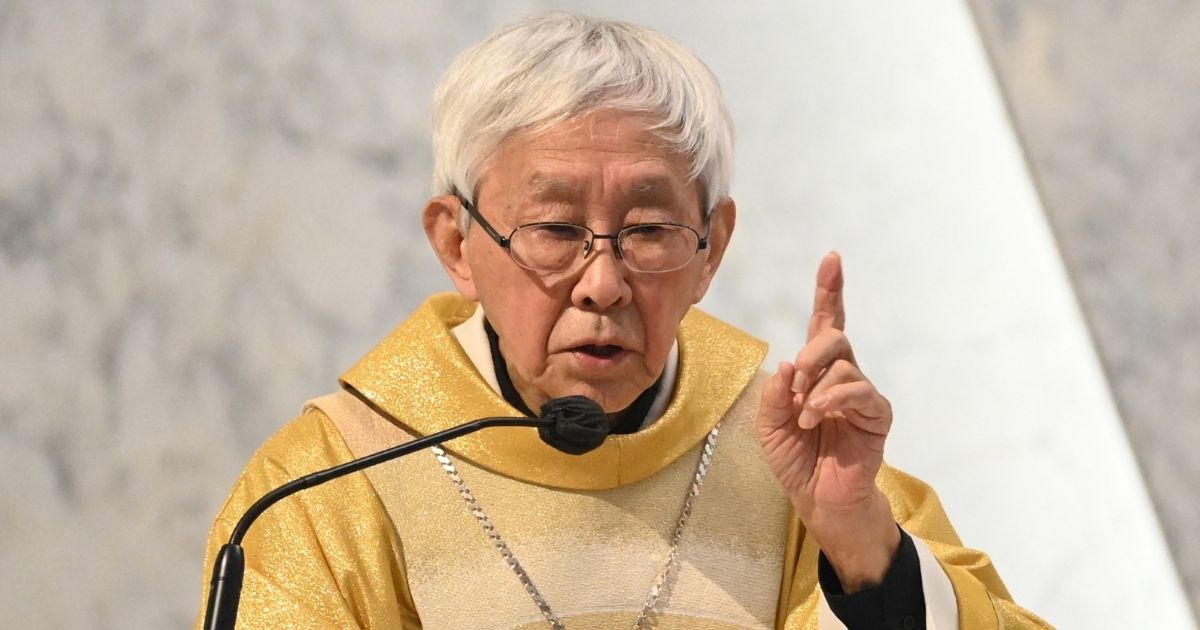 Progressives, Communists and other leftists see the separation of church and state as a dichotomy in black and white. They seek to cancel any moral authority other than that which undergirds their political power.

The South China Morning Post reported May 11 that retired Cardinal Joseph Zen had been arrested by Hong Kong’s national security police for “colluding with foreign forces.”

The three detainees were trustees of the defunct 612 Humanitarian Relief Fund, an organization that provided legal aid and financial resources to some of those who participated in the 2019 pro-democracy protests in Hong Kong. The protests were suppressed by security forces, reported The Guardian.

The Vatican expressed “concern” over the arrest of Zen, who retired in 2009 but remains an outspoken advocate of democracy and religious freedom in China.

In 2020, Zen traveled to Rome to persuade Pope Francis to name a new bishop for Hong Kong — one who “can be trusted by the people” instead of being enmeshed in political intrigues and concerns, according to the Hong Kong Free Press.

Zen told EWTN Vatican, “We really need a bishop who is a good shepherd for his flock. I hope he … really gives us a good bishop and not pay too much importance to the political aspect of the problem.”

📹 VIDEO | #CardinalZen shares his worries over good bishops and expresses his understanding of not being able to see #PopeFrancis on such short notice. pic.twitter.com/HVsa4CuRog

It’s tough to trust politicians and their operatives in the best of times, especially in China. These are not the best of times. Zen never got the meeting with the pope and so was not able to state his case. I wonder why.

In November 2021, Francis told journalists that the church “is not a political organization,” the Catholic News Agency reported. The pope also emphasized the need for on-the-ground reporting and in-person interviews to report the truth. Try that in China. As the saying goes, “Sayin’ ain’t doin’.”

If the church isn’t political, as Francis said, why, in 2018, was a deal struck between the Vatican and China that allows China to choose the bishops on the mainland and then have Rome approve them?

Zen criticized the deal as a sellout to the communist government, the Guardian reported at the time. “They’re [sending] the flock into the mouths of the wolves,” he said. “It’s an incredible betrayal.”

To further complicate matters, the contents of the deal remain secret.

In 2020, while Beijing was blatantly suppressing Muslims and underground Christians, the deal was renewed. If the Vatican-China deal isn’t political, neither was the Russia collusion hoax.

No wonder Zen was denied an audience with the pope. For all intents and purposes, the Vatican has quietly canceled him.

If, as Francis said, the church is apolitical, the only thing it can exert on China is its moral authority. But will it even go that far for fear of offending the communist regime?

The Vatican expressed “concern” over Zen’s arrest, and its secretary of state, Cardinal Pietro Parolin, said he was “displeased” with the situation, according to the National Catholic Register.  Parolin added he was thankful that  Zen was “treated well” and hoped that the affair did not disturb the Vatican’s ongoing “dialogue” with China.

Do you approve of the Catholic Church's approach to China?

In the meantime, House Speaker Nancy Pelosi, who is Catholic, defended Zen, praising him as “a critical voice of conscience, an embodiment of moral fortitude,” the National Catholic Register reported.

The California Democrat “urged the Vatican to reject an agreement that would give the People’s Republic of China say over the ordination of bishops.”

This is the same agreement Parolin is advocating.

Last week, Pelosi was ordered not to present herself for Holy Communion by Archbishop Salvatore Cordileone of San Francisco.  Pelosi is vehemently pro-abortion, and this flies in the face of Catholic doctrine and belief.

“Speaker Pelosi remains our sister in Christ,” the archbishop said in a letter to the faithful on Friday. “Her advocacy for the care of the poor and vulnerable elicits my admiration. I assure you that my action here is purely pastoral, not political.”

When Cordileone said the move is not political, you can believe it. There’s no bait-and-switch. No intrigue.

Is Pelosi defending Zen to get back at the pope for failing to come to her rescue? It’s possible. It would help to make sense of the political game of musical-chair morality.

Why hasn’t Francis admonished Catholic politicians who openly support abortion? Could it be that he is playing politics instead of upholding the traditions and doctrines of the faith?

In 1972, Pope Paul VI, referring to Vatican II, lamented that “the smoke of Satan has entered the temple of God.” The smoke is the ambiguity inherent in human language. Politicians exploit language to gain power. To do so, they manipulate the moral authority of the Judeo-Christian tradition as a means to an end — power devoid of morality.

This is the separation of church and state that leftists desire. For them, the state is a means to heaven on earth, a utopia created by human power. A heaven full of lies, intrigue and deceit, however, is void of transcendence. It is heaven without God.

Cardinal Zen was released from detention on May 12. His trial has been set for Sept. 19, according to the Catholic News Agency. Regardless of what happens at the trial, the message is clear: Zen must submit himself to the mercy of the court.

But he is a man of God. He answers to a higher party than that of the Chinese communist regime.

Here in the good ol’ U.S.A., the faithful should be angry at the worldwide political mockery of our Judeo-Christian faith. As Paul wrote to the Ephesians, “Be angry and do not sin.”

If we are not angry, we risk acquiescence. We become complicit in chipping away at the Judeo-Christian core of our nation’s founding documents.