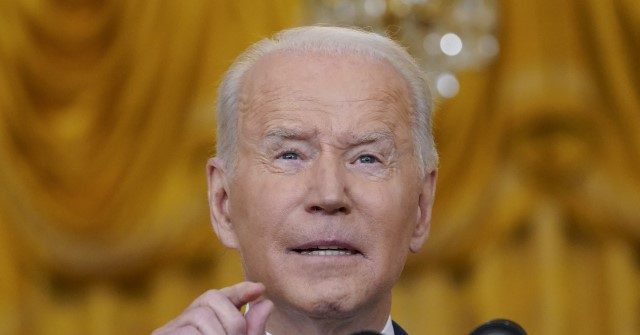 Republican Gino Campana, candidate for U.S. Senate in Colorado, appeared on Breitbart News Saturday and said he is “just as baffled as everybody else” regarding Biden’s approach to increasing tension between Russia and Ukraine.

Boyle asked Campana to share his thoughts on the disastrous Biden press conference earlier in the week.

“I’m just as baffled as everybody else, to find that the President of the United States would say something like a ‘minor incursion’ to take place along the border and allow it,” he said.

Campana also attacked Biden for leaving the U.S. embassy in Ukraine without an ambassador for the first year of his presidency. He drew distinctions between former President Donald Trump’s foreign policy and Biden’s.

“Why does he continue to have the mindset of sending them blankets rather than bombs? I mean, Trump empowered them to defend themselves. But he continues to embolden Putin to take over Ukraine and all the surrounding countries,” Campana said.

“Biden ran on a platform of putting America back on the world stage, and he certainly has not in any way that I want to see. And Senator Bennett, who has voted 100% aligned with Biden, has to own this,” he said.

While comparing the two presidents, Boyle commended Trump for blocking the Russian Nord Stream 2 pipeline, which is critical to the Russian economy. Biden, however, allowed Putin to continue to pipeline while simultaneously shutting down oil and gas pipelines here in the United States.

The point is we need to stop Russia from being a bad character on the world stage. And we do that by sanctioning them and not allowing them to generate 40 percent of their income through a pipeline that bypasses Ukraine and allowing them to take over Ukraine. That’s not how it works. And as we look at our own country, what did he think was gonna happen when day one, he comes in and turns out pipelines and revokes permits, he didn’t anticipate a rise in price for fuel?

Campana then discussed his strategy to win over Democrat voters, which involves highlighting the adverse impact Biden’s presidency has on their everyday lives.

You know what I tell them? I don’t care if you’re Democrat, Republican, unaffiliated, no affiliates, I don’t care what you are, every time you go to the pump, and you fill up, you’re upset, you’re pissed. And you’re going to you’re taking that out on the current administration. Every time you go to the grocery store, and you go in that shop, you look for your favorite cereal and the shelf is empty. Or if you find it and it’s double in price, or it’s the same size package with half the volume for the same price. You’re upset. It doesn’t matter what your political affiliation is. These guys got to own what they did to our country and one year.

He went on to criticize his opponent, Sen. Michale Bennet (D-CO), for being out of touch with the everyday lives of his constituents.

“You think Michael Bennett sitting around a table with his family trying to figure out how to make ends meet? Think he’s having a discussion with his wife about deciding between piano lessons and, and, and soccer?” Campana asked.

He’s not having those conversations. It’s obvious, by a guy who sponsors a bill to abolish the debt ceiling because he says it’s too much of a hassle to negotiate it every year with other legislators. That’s a guy that’s out of touch with reality, is out of touch with the state of Colorado as well.

Campana went on to talk about his background and noted that he is not a politician but rather an everyday American who “really cares about his community.”

I’m not a politician, Matt. And I know people say that all the time. It’s the most stump speech, and they start off, I’m not a politician. I’m really not. I’m an entrepreneur. I’m a builder. I’m a father. I’ve coached over 50 soccer teams. I coached wrestling for 20 years. You know, I’m just a guy that really cares about his community, to the point where he gets engaged and involved.

Campana went on to talk about his service on the Public Buildings Reform Board, where former President Trump nominated him to help cut government waste.

“But President Trump saw what I was able to do. Building my company and building my community with the last subdivision we developed had 1,100 homes in it. And he had the trust in me to point me to be the chair of the Public Buildings Reform Board,” he said.

We were tasked with identifying $8 billion worth of federal assets, federal buildings, that were being underutilized and use private practices to sell it to maximize the amount of money for the taxpayers of the United States. And to stop the maintenance on those facilities. But you know, what liberals did? They blocked the Senate confirmation at the end of the Trump administration, so we weren’t able to serve that out.

“And I brought on people like former Interior Secretary Bernhardt. He grew up in Rifle, Colorado. He understands it beyond better than anybody else. To be the most equipped Senate candidate to take out Michael Bennett, I need people like that on my team,”

“Chad Wolf came on my team. And I can pick up the phone, call Chad Wolf anytime I want to talk about Homeland Security. Yesterday, I was on the phone with Rear Admiral Brown talking about Ukraine,” he said, adding, “These are all people that have joined my team because they believe so strongly that we need to take out Michael Bennett. They think he’s vulnerable. He’s a great target to go after. They think I’m the right guy to do it. And we’re gonna take back the set. I’m so thankful for everything that they do for me, and they’re not charging me a penny for coming on my team.”