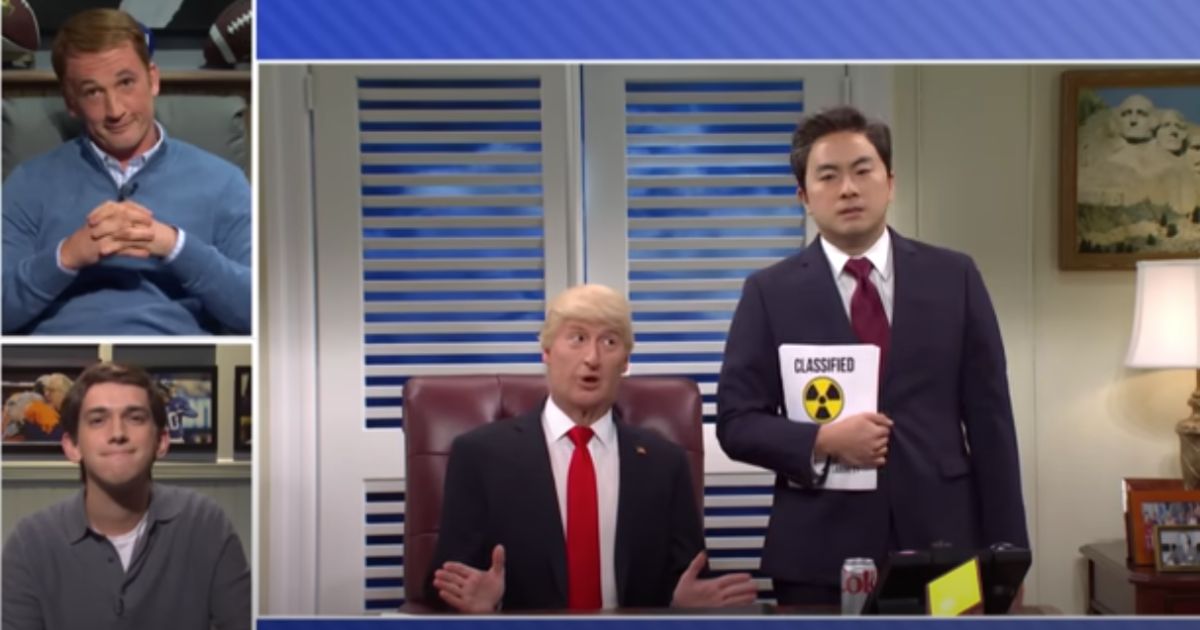 Although I certainly see its foibles, I probably have a higher opinion of “Saturday Night Live” than a lot of conservatives do. While I — like many in America at this point, I suspect — am sick of Alec Baldwin’s hateful toddler-esque impersonation of former President Donald Trump, and I’ve never found Pete Davidson particularly funny, in the past few years there have been plenty of sketches I’ve watched and re-watched.

That might be over, if this season’s opener was any indication of what the year will bring.

In the cold open for the “SNL” season 48 premiere, host Miles Teller impersonated retired NFL legend Peyton Manning during a “Manningcast” sketch with brother Eli (played by SNL cast member Andrew Dismukes). I’ll give Teller credit for a pretty decent Peyton impression — but that’s about all the credit this sketch deserves.

The setup was that the Manning podcast was going to comment live as “SNL” launched its first show of the season. Could that have comedic potential? Maybe.

Did it turn into an uncomfortably self-aware attempt at self-deprecation that fell flat with viewers? You bet.

DeSantis Turns the Tables on CNN Reporter Who Questioned Hurricane Ian Response: ‘Where Was Your Industry?'

One of Teller’s opening lines pretty much summed up the whole thing: “Oh, good. Trump sketch. Way to mix it up.”

It went downhill from there.

In general, the sketch sounded like the kind of half-jokes your insecure friend says to belittle himself in hopes that you’ll contradict him.

When someone does that around me, I generally don’t take the bait. The audience didn’t seem to take it while this sketch was running, either.

Do you laugh at this “SNL” sketch?

Heidi Gardner did a turn as South Dakota Gov. Kristi Noem, who inexplicably launched into a bizarre Dracula caricature: “I vant to take your abortion rights,” she said in an accent that was less Bela Legosi and more Count Chocula.

Eli’s response: “Time out. What the hell was that?”

America’s response: Pretty much the same, I think.

It went downhill from there. (Yeah, I know I said that before. But it bears repeating.)

Gardner as Noem then — also inexplicably, in an impersonation that Teller’s Peyton described as “a political impression that no one asked for” — wished Trump a “happy early Columbus Day,” four words that have perhaps never previously been uttered together in the English language.

The sketch then hit a low point, at least as far as the show’s studio audience was concerned.

Crickets. They’re not even going to laugh at it, either.

“The show is in a rebuilding year for sure,” Teller said — rather optimistically, in my opinion.

Even the always-likable Jon Hamm, brought into the sketch presumably to save it, couldn’t do much with what he was given.

“Jon, what have you seen so far tonight?” Teller/Peyton asked.

“I — I don’t know. But it’s not comedy,” Hamm responded, making the point I’ve been trying to get across for 20 paragraphs now.

Did I mention that the sketch kept going downhill?

I’d like to quote an entertainment critic calling the sketch a “humiliating attempt at relevance,” but it turns out that I don’t have to. Dismukes/Eli did it for me … in the sketch itself.

But Hamm probably summed it up best in his response to a self-referential joke from Teller: “Well, I heard they rarely put the host in cold opens, so when they do, it is special.”

“Special, or is it desperate?” Hamm replied.

You can watch the entire sketch here, but please don’t. I have enough on my conscience already.

I’ll be honest with you: I’m still going to watch my favorites on YouTube from time to time, when I need a laugh — Melissa McCarthy as Pizza Lady Barb Kelner, Billie Eilish hawking a low-rent hotel, Mokiki doing the sloppy swish. (My sketch comedy taste generally runs to the absurd … obviously. Bill Murray as Hercules? Yes, please.)

But, if this season’s opener is any guide, it doesn’t look like I’ll be adding any new clips to my watch list anytime soon.

George Upper is the former Editor-in-Chief of The Western Journal and an occasional co-host of “WJ Live,” powered by The Western Journal. He is currently editor-at-large. A former U.S. Army special operator, teacher and consultant, he is a lifetime member of the NRA and an active volunteer leader in his church. Born in Foxborough, Massachusetts, he has lived most of his life in central North Carolina.

George Upper, editor-at-large of The Western Journal, is a former U.S. Army special operator, teacher, manager and consultant. Born in Massachusetts, he graduated from Foxborough High School before joining the Army and spending most of the next three years at Fort Bragg. He now lives in central North Carolina with his wife and a Maine Coon named Princess Leia, for whose name he is not responsible. He is active in the teaching and security ministries in his church and is a lifetime member of the NRA. In his spare time he shoots, reads a lot of Lawrence Block and John D. MacDonald, and watches Bruce Campbell movies. He writes “The Upper Cut,” a weekly column that appears quarterly (more or less). He is a fan of individual freedom, Tommy Bahama, fine-point G-2 pens, and the Oxford comma.