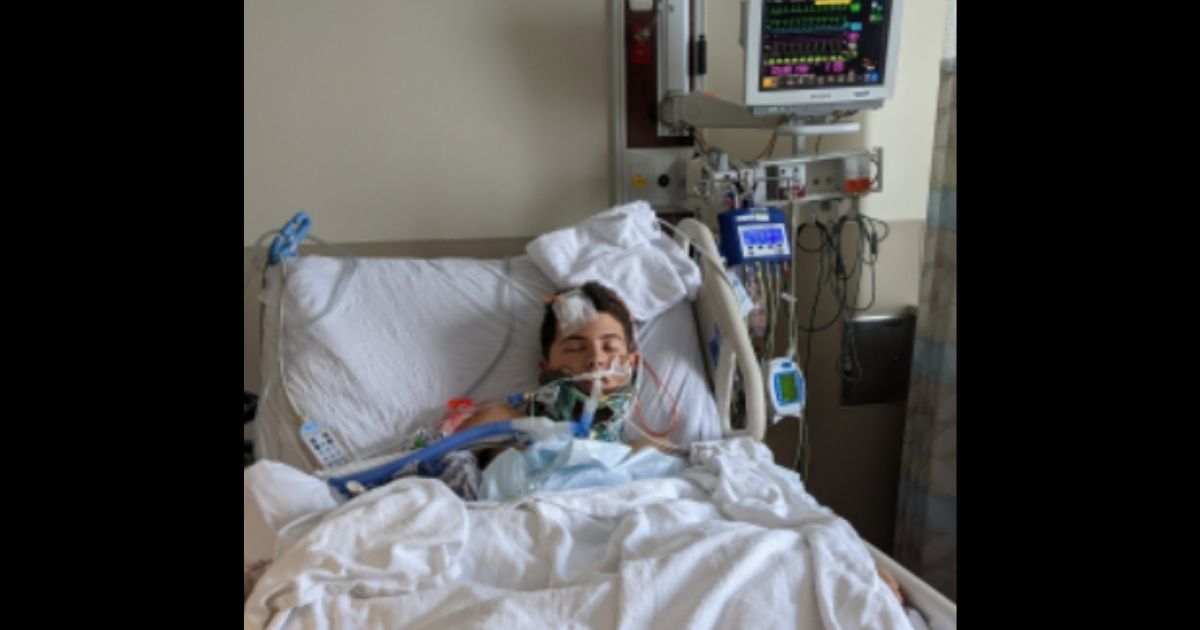 On Sept. 17, 2021, 17-year-old Stephen Yago from Richmond, Virginia, was driving along a country road when his truck suddenly malfunctioned, flipped, rolled and threw the teen from its twisted remains.

“Eventually, the truck flipped over several times, and in that process, Stephen was thrown out of the vehicle,” Stephen’s father, Chris Yago, told WWBT-TV.

“Really a blessing that he was ejected because the driver’s seat, the cab of the truck was completely crushed on the driver’s side.”

The teen was in such rough shape that a hospice nurse, who happened to spot the accident and stop to help, didn’t think he had much time left.

Her one goal was to keep the boy alive long enough for him to say goodbye to his parents.

Stephen was taken to Chippenham Hospital, but his prognosis was not good. He was unconscious, in critical condition with multiple fractures and bleeding, as well as bruising on his brain.

All in all, it looked like a death sentence or at best a very different future life for the teen, and there was no way of knowing if or how much he would recover.

“When he came in, he was pretty much in a comatose state,” Chippenham Hospital Trauma Medical Director Dr. Stan Kurek said. “The thing with brain injury, you can’t really predict it.”

But Stephen made it clear he wasn’t done fighting. A week after being hospitalized, he tried to take out his breathing tube. It was then removed, and he began to breathe on his own.

It took months of rehabilitation for Stephen to regain many of the functions he’d taken for granted before, but he made a stunning recovery.

On May 18, National Trauma Survivor’s Day, Yago made the trip back to the Chippenham & Johnston-Willis Hospital to thank the dedicated team for their work and celebrate his progress.

‘It's a Miracle': Dog Is Lone Survivor in Fatal Plane Crash, Vet Stunned by Her Condition

“It’s #NationalTraumaSurvivorsDay 2022,” the hospital posted on Facebook. “In honor of the day we are sharing the story of traumatic brain injury survivor, 17yo Stephen Yago.

“Seven months ago, Stephen Yago’s parents were faced with the possibility that their teenage son would live indefinitely in an assisted living facility after a near fatal wreck.

“On June 3, he’ll be walking at graduation.”

Dr. Kurek said that seeing the teen and how well he’s doing “makes it all worthwhile.”

The fact that Stephen is alive — let alone that he’ll be able to walk unassisted and receive his diploma from Benedictine College Preparatory — is a blessing the family doesn’t take for granted.

As for Stephen, the sobering incident has left him intimately acquainted with the fragility of life.

“You never know when it’s going to be your last breath,” he said.

Amanda holds an MA in Rhetoric and TESOL from Cal Poly Pomona. After teaching composition and logic for several years, she's strayed into writing full-time and especially enjoys animal-related topics.

As of January 2019, Amanda has written over 1,000 stories for The Western Journal but doesn't really know how. Graduating from California State Polytechnic University with a MA in Rhetoric/Composition and TESOL, she wrote her thesis about metacognitive development and the skill transfer between reading and writing in freshman students.
She has a slew of interests that keep her busy, including trying out new recipes, enjoying nature, discussing ridiculous topics, reading, drawing, people watching, developing curriculum, and writing bios. Sometimes she has red hair, sometimes she has brown hair, sometimes she's had teal hair.
With a book on productive communication strategies in the works, Amanda is also writing and illustrating some children's books with her husband, Edward.