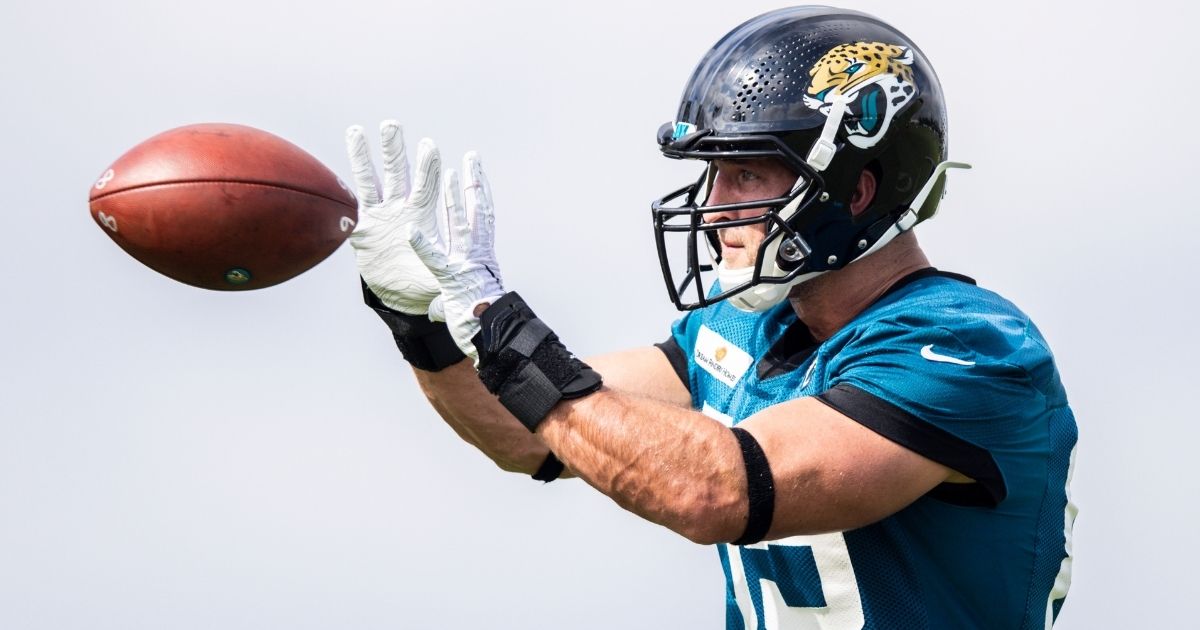 Former NFL and University of Florida quarterback Tim Tebow was showered with praise by fans at the Jacksonville Jaguars’ training camp on Friday as he competes for a roster spot as a tight end.

Tebow, 33, announced earlier this year that he would convert from quarterback to tight end, and Jaguars coach Urban Meyer gave him a chance to show his skills.

CBS Sports reported that Tebow is one of six tight ends who hope to make the final cut before the NFL regular season kicks off in  September.

Meyer commented on Tebow’s presence with the team and his work ethic when speaking to the Florida Times-Union last month; training camp began this week.

“Oh, Tim has done a decent job. We all know this is a new position for him,” Meyer said. “He’s a great teammate. In the locker room, I can see everybody getting along; we have good chemistry on our team. But he’s picked it up decently.”

If crowd reaction from this week is any metric, Jaguars’ fans are rooting for the Jacksonville native to earn a roster spot.

On one play in training camp on Friday, the outspoken Christian and former Heisman Trophy winner dived to catch a dart from rookie quarterback Trevor Lawrence — the 2021 NFL Draft’s top overall pick, out of Clemson.

The catch would have been good for a score in any NFL game.

Lawrence to Tebow in the red zone pic.twitter.com/9XyZO6i48W

Tebow looked like a natural fit for his new position. Jacksonville sports reporter Jamal St. Cyr of WJXT-TV tweeted video of Tebow participating in his first special-teams drill of the day on Wednesday.

Nice rep from Tebow in the first special teams drill of the day pic.twitter.com/EvKd3YvTmO

St. Cyr later tweeted about the end-zone grab, and the post received a lot of attention.

Trevor Lawrence rolling to his left. Finds Tim Tebow in the back corner.

Tebow dives and makes the catch for the TD

As a receiver Tebow and Tyler Davis are tied for the 2nd best pass catching threats so far to me.

Tebow is so special https://t.co/9AXbUIngTY

CBS Sports reported that Tebow’s jersey became the league’s top-selling item after he signed with the Jaguars in May.

Tebow has been out of the league since he played quarterback for the New York Jets in 2012.

His most recent meaningful games were during the 2011 season for the Denver Broncos, when he quarterbacked the team into the playoffs.

Tebow was chosen by the Broncos in the first round, 25th overall, of the 2010 NFL Draft.

He and Meyer won two national titles together while at the University Florida, and Tebow also grabbed college football’s top honor, the Heisman, in 2007.

Do you think Tebow will make the Jaguars' roster?

The duo are together again. If Tebow secures a spot on the Jaguars’ roster with Meyer on the sideline and Lawrence under center, the team has nowhere to go but up.

The Jaguars finished the 2020 season with an abysmal 1-15 record before rebooting with several new players.