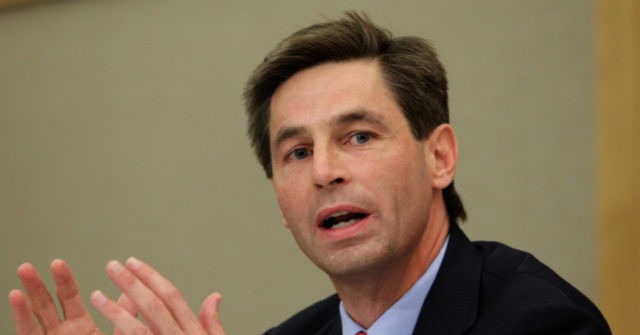 Former President Donald Trump reacted to Ohio State Senator and anti-Trump politician Matt Dolan declaring his U.S. Senate bid on Monday, stating, “I know of at least one person in the race who I won’t be endorsing,” as “the Republican Party has too many RINOs.”

Dolan, who is the son of the Ohio businessman who caved to cancel culture by changing the name of the Cleveland Indians to “Guardians,” is now running for U.S. Senate as a “Republican,” claiming to oppose the very same cancel culture — while also making erasing former President Trump a centerpiece of his campaign.

“Anybody that changes the name of the once storied Cleveland Indians to the Cleveland Guardians should not be running for the United States Senate representing the Great People of Ohio,” Trump said in a statement on Monday.

“Despite this, a man named Matt Dolan, the son of the owner of the team, said he is against Cancel Culture. Do those two things really work together?” Trump continued.

The former president concluded his statement by implying that he will not be endorsing Dolan for U.S. senate.

“In any event, I know of at least one person in the race who I won’t be endorsing. The Republican Party has too many RINOs!” Trump affirmed.

Unlike the other candidates, however, Dolan is running as an “establishment” GOP voice, according to the Columbus Dispatch — a seemingly unwise move, as an establishment candidate would likely prove to be unpopular among Ohio Republican voters, given that the state voted to reelect Trump in the 2020 presidential election at a higher percentage than Texas.

The Ohio senate primary is scheduled for May 3, 2022. Senator Rob Portman (R-OH) was the catalyst for what has already become a very competitive and expensive race, after announcing earlier this year that he would not seek reelection in 2022.

‘What if Trump’s Grip on the GOP Isn’t as Strong as It Seems?’

Will all of America go on strike?

Biden’s $3.5 Trillion Bill Is a Death Blow to America’s Supply...