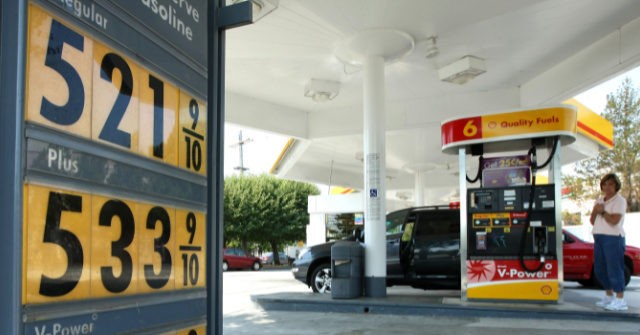 The White House confirmed they are speaking with oil and gas producers in the United States about reducing rising energy prices, just days after Joe Biden boasted about suspending drilling in Alaska.

Reuters reports White House officials reached out to energy companies as the world faces record high prices and a shortage of supply.

A week earlier, Biden boasted during a White House event on national monuments he had suspended oil and gas drilling on federal lands in Alaska.

“Alaska is pretty big. There’s an awful lot we need to protect,” Biden said Friday. “That’s why I’m refusing to sell out the Arctic National Wildlife Reserve to oil and gas drilling.”

In June, Biden suspended oil leases in Arctic National Wildlife Refuge after President Donald Trump opened the area up to drilling in 2017.

Gas prices approaching $5 a gallon are displayed in front of a Shell gas station on October 05, 2021 in San Rafael, California. (Justin Sullivan/Getty Images)

The price of U.S. crude oil hit $80 a barrel this month, a seven-year high.  This year oil production remains about two million barrels a day lower than the nearly 13 million barrels per day produced by the United States in 2019, prior to the pandemic.

The United States government announced Wednesday that households could see heating bills jump as much as 54 percent.

Last week, the White House blamed September’s Hurricane Ida for the spike in energy costs in the fall, but said that the president’s priority was to shift to cleaner sources of energy.

“Certainly, we all want to keep gasoline prices low, but the threat of the crisis — the climate crisis — certainly can’t wait any longer,” White House press secretary Jen Psaki said to reporters.