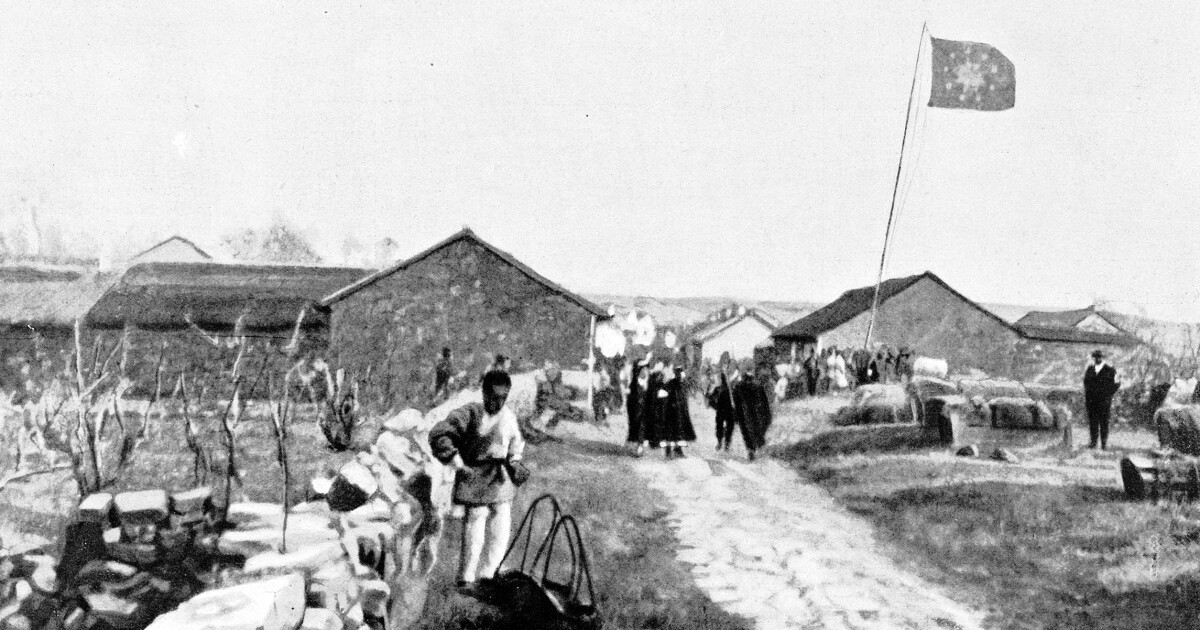 Ge Fei is one of China’s most celebrated contemporary novelists, and his seminal work Peach Blossom Paradise has just been translated into English for the first time. The novel is surprisingly traditional for a writer who has a reputation for being experimental. Peach Blossom Paradise is a family saga with the heft of an epic that follows the life of a young woman who meets a revolutionary as the Qing dynasty collapses. This historical novel has added resonance today as the prospect of a new Cold War becomes plausible.

Americans could benefit from reading Chinese literature. Peach Blossom Paradise is a tale of collapsing regimes and political utopianism that provides a useful framework for thinking about Sino-American relations.

Readers in the United States got a taste of why Fei is called the “Chinese Borges” in 2016, when two of his novellas were translated for the first time. The Invisibility Cloak is a surreal story about the world of Beijing audiophiles, while Flock of Brown Birds is a metafictional tale about the author himself. In contrast, Peach Blossom Paradise is a straightforward novel about a family, told in casual and sometimes poetic language. Throughout the novel, there are occasional footnotes linking to the real events the book is based on. It’s also traditional in the sense that it purposefully evokes the Chinese literary canon. It is a retelling of Peach Blossom Spring, an old Chinese fable about a fisherman who finds a hidden utopian village where peasants go to hide from China’s civil unrest. Once the fisherman leaves the village, he can never find it again. Peach Blossom Paradise uses this ancient tale to examine the Chinese Revolution in 1911.

The novel follows Xiumi, the daughter of a wealthy landowner who was recently dismissed from his role as a government mandarin. The Qings kicked Xiumi’s father out of court because he had revolutionary sympathies. He goes insane obsessing over a painting of the Peach Blossom Spring myth. The novel begins on the day he escapes the house and disappears.

A few days later, a mysterious young man named Zhang Jiyuan, who Xiumi’s mother claims is a relative, arrives at the family home. Zhang talks of revolutionary ideals and an end to old traditions. Xiumi learns that he is part of a cabal plotting to overthrow the government, but when imperial forces hunt down the revolutionaries, he flees and leaves Xiumi with a strange statue that draws her into the world of a secretive group called the Golden Cicadas.

The novel is long and eventful, but its plot is leisurely and follows a cyclical pattern. Each section of the book begins in a place that is close to idyllic but gets destroyed by those who seek to establish a utopia. Xiumi’s father has a position of power in the government but ruins it by getting caught up with the revolutionaries, and his family loses its prestige. Zhang lives with a happy family but brings them to ruin with his politics. Later, in the most interesting part of the book, Xiumi is kidnapped by violent bandits. Inspired by Peach Blossom Spring, the highwaymen have tried to create a bandit utopia. But when they refuse to join forces with the revolutionaries, the Golden Cicada group assassinates all their leaders and throws the land into chaos. Xiumi eventually returns home to her family, who thought she was dead. But there is no joy in the reunion because Xiumi has become a fanatical revolutionary. She sets up a revolutionary school and ends up alienating her friends and family as she plunges her home into chaos.

Peach Blossom Paradise is also politically, as well as formally, traditional. For Fei, the word revolution holds purely negative connotations. Late in the novel, when Xiumi has become a half-crazed revolutionary, she says that “revolution is when no one has any idea what they’re doing. You know you’re making revolution, it’s true, but you have absolutely no idea what’s going on.” Revolution is equated with pure chaos and consistently linked to utopianism. At one point, one character sympathizes with Xiumi’s attempt to create a world where “everyone’s frustrations disappear.” Another character responds, “Everybody has fantasies like that every once in a while, but you usually indulge them for a moment then forget about them. Nobody except a psychopath would actually try to realize them.”

It’s easy for Americans to be cynical about a modern Chinese novel that warns against the dangers of revolution. After all, Fei teaches at the elite Tsinghua University, the alma mater of Chinese President Xi Jinping, and so has a natural interest in defending the status quo. But Fei’s professional position cannot explain why his novel would resonate so strongly with the Chinese people. From 1911 until the 1980s, China dealt with near-constant political turmoil. The Great Leap Forward and the Cultural Revolution were horror shows as bad, if not worse, than anything that happened in the 20th century. When Deng Xiaoping rose to power, his platform was literally “eliminating chaos.” Many Chinese families have histories of misery that are not so different from the ones chronicled in this novel. By relying on modern experiences and literary tradition, Peach Blossom Paradise offers tremendous wisdom that people should consider when dealing with China.

America’s ruling class is not utopian in the manner of the revolutionaries depicted in Peach Blossom Paradise. Our rulers are soul-sick cynics who strategically indulge utopian naivety as a cover for their shortsighted greed. When U.S. companies began to manufacture in China, they agreed to a joint-venture policy in which the Americans would partner with Chinese businesses with the explicit purpose of training the Chinese. After building China’s industrial base, our ruling class then allowed China to enter the World Trade Organization.

Put simply: Our ruling class trained and funded a rival empire. On paper, these actions were justified with utopianism. They told us China could never become as wealthy as the U.S. and that as China became richer and more powerful, it would also become a benevolent liberal democracy. Did anyone believe this utopianism? Of course not. They wanted to get rich, and they did. Everyone knows that Democratic Rep. Eric Swalwell got seduced by a Chinese spy, but why does everyone have collective amnesia about China’s role in the 1996 election, when it poured money into reelecting former President Bill Clinton? Now, the Washington, D.C., establishment is coalescing around an anti-China posture, even as it continues to stoke a destabilizing cultural revolution in the U.S. If revolution is when no one has any idea what they’re doing, then our ruling class is truly revolutionary.

Americans who realize that the next decade will be defined by our country’s relationship with China should spend some time reading Chinese literature. While our fiction stokes constant cultural revolution, Peach Blossom Paradise explores the dangers of utopianism and warns against rulers who destroy their own home.

James McElroy is a novelist and essayist based in New York.