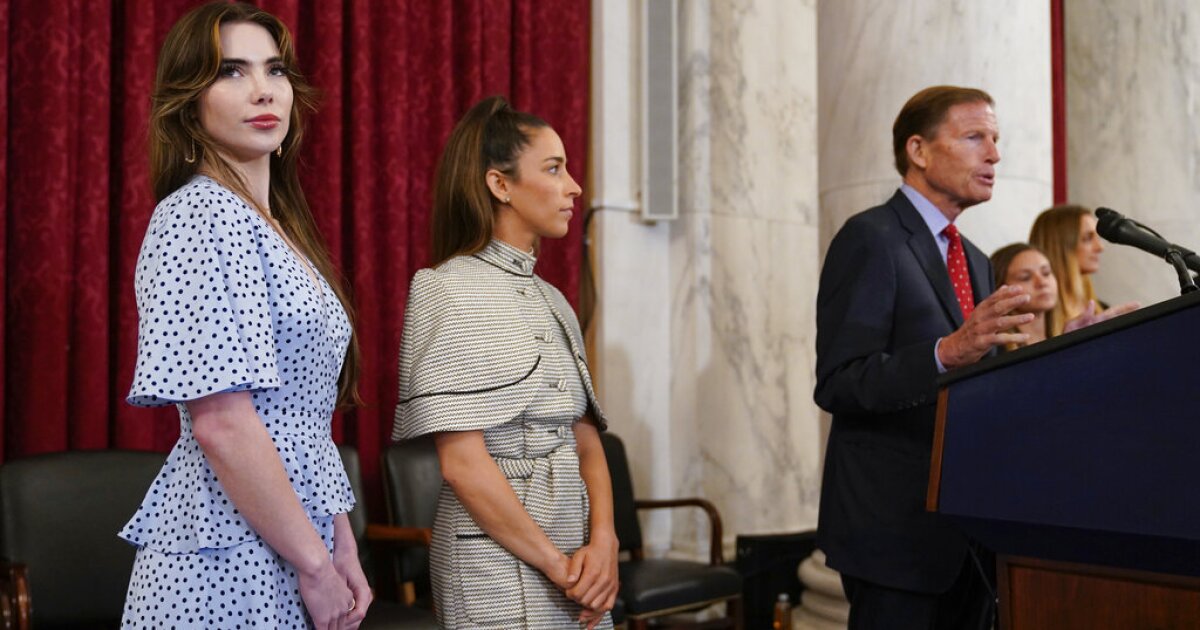 Senators and victims alike expressed anger Wednesday over the Justice Department’s decision to decline prosecution against the FBI agents who botched the case against now-convicted sexual predator Larry Nassar, as well as the department's refusal to send a representative to testify why it had let officials off the hook.

Simone Biles, McKayla Maroney, and other U.S. gymnasts condemned USA Gymnastics, the Olympic committees, and the FBI for ignoring — or helping cover up — sexual abuse allegations about Nassar during a Senate Judiciary Committee hearing on Wednesday. Maroney specifically called out Deputy Attorney General Lisa Monaco for not showing up to testify, and she criticized the Justice Department for not charging any FBI agents who botched the case or misled others about it.

FBI supervisory special agent Michael Langeman, who interviewed Maroney in 2015 about her claims that Nassar had abused her, was fired from the FBI ahead of Wednesday’s hearing. Langeman had been a lead agent at the FBI’s Indianapolis field office, and DOJ inspector general Michael Horowitz’s July report concluded he and former Indianapolis Field Office Special Agent in Charge W. Jay Abbott lied to the department watchdog.

USA Gymnastics conducted an internal investigation into sexual assault allegations leveled against Nassar, and USA Gymnastics CEO Stephen Penny Jr. alerted the FBI’s Indianapolis Field Office in July 2015. But the FBI did little to follow up.

FBI Director Christopher Wray said Abbott's actions “reflect violations of the FBI’s long-standing code of conduct and the ethical obligations for all FBI employees” but said he retired in January 2018 “before any review launched.”

“It’s extremely frustrating that we’re left with little disciplinary recourse when people retire before their cases can be adjudicated,” he said. “I’m deeply and profoundly sorry to each and every one of you.”

Democratic Senate Judiciary Committee Chairman Dick Durbin told Wray that “this man is on the loose molesting children, and it appears that it’s being lost in the paperwork of the agency.”

Durbin asked Horowitz whether the “deliberate misrepresentations” by Abbott and Langeman reached the level of criminal violations.

“They violated criminal law sufficiently that — what we do at that point is make the referral to prosecutors to assess them because that’s who needs to make the assessment whether or not there will be charges brought,” the watchdog said.

Durbin criticized DOJ’s decision and the refusal to send someone to testify on Wednesday, calling it “outrageous.”

“I am sorry because I have great faith in this attorney general and his Department of Justice, but we asked them to bring someone in to explain this today, and they refused and said they wouldn’t attend,” he said.

Wray took over the FBI in 2017 after the firing of James Comey, during whose tenure the FBI botched the Nassar case. Wray testified he didn’t know if Comey was aware of the Nassar case before 2016.

Horowitz and Wray both declined to call upon the DOJ to testify in front of the Senate when Democratic Sen. Richard Blumenthal asked Wray why he wasn’t urging DOJ to prosecute.

“I don’t want to get into my discussions with the attorney general … If there is a way that I can appropriately engage on a prospective decision — which I’m trying to be very careful not to blur my lanes of responsibility — “ Wray said before cutting himself off.

Nassar pleaded guilty in 2017 to federal charges of child pornography and tampering. That, combined with a guilty plea in Michigan state court to counts of sexual assault, sets Nassar to spend the rest of his life in prison.